Cycling in Germany #5 – Bad Schandau to Pirna along the Elbe

We wake up in our lime green and yellow pension in Bad Schandau (bad means bath and hence spa) and the first thing we do is check the weather and the temperature. Yesterday we were in transit between our spacious comfortable flat in Kobern-Gondorf and Saxon Switzerland on the Elbe River. Theoretically the 550 km should have taken about 5 ½ hours plus rest stops but we were held up for 1 ½ hours in a traffic jam due to roadwork on the motorway. 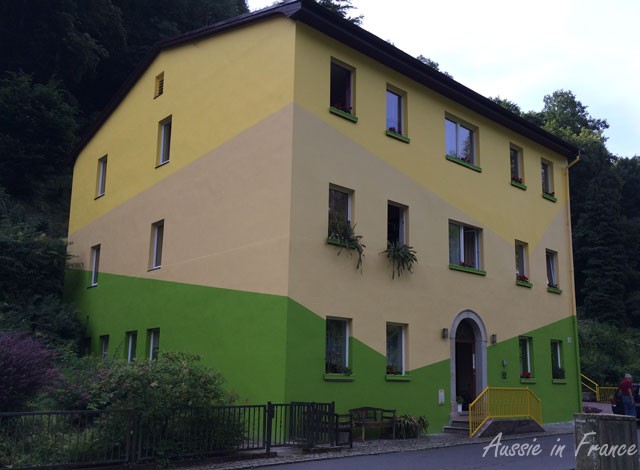 A little word about the German motorways. Unlike French motorways, they are free, and form a vast network that crisscrosses the country. The only problem is the way the people drive on them. The speed limit is 130 kph unless indicated otherwise (by which I mean less than 130 of course). If there are three lanes, the trucks and drivers who respect the speed limit use the right hand lane, the vast majority who drive at 130 to 140 kph (including us) mostly stay in the middle lane while the left hand lane is reserved for those who whizz past at a speed I wouldn’t even dare to calculate. I’ll leave it up to you to imagine what happens when there are only two lanes. I let Jean Michel drive in Germany. 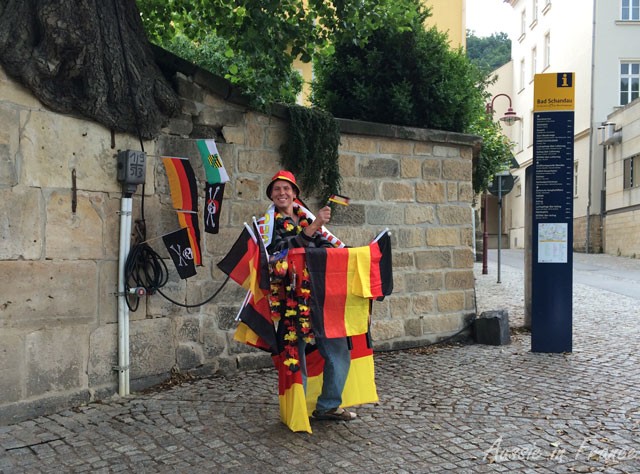 So it was about 5 pm when we reached our destination and went straight to the tourist office to find ourselves a flat, passing a German soccer flag seller on the way! All that was proposed was a very decrepit looking building on a very busy road so we went back again to the tourist office to ask for a hotel room with wifi instead. Perhaps it was because the weekend was coming up but the only place available was our pension. By then it was raining lightly. The room is nothing much but it’s very quiet, quite large, has a stunning view out of all three windows and wifi that connects to my laptop provided I sit fairly close to the door. The bed is OK and the flimsy curtains don’t encourage us to sleep late. Maybe that’s a good thing … 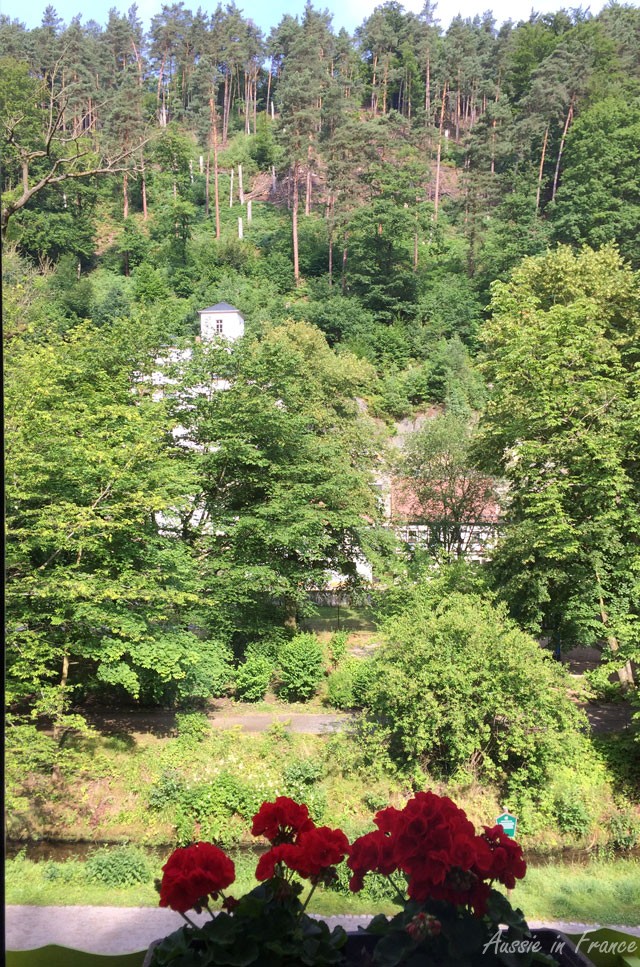 So back to the weather. It’s about 14°C and sunny, with 23°C expected in the afternoon. By the end of an uninteresting breakfast, we’ve gained a degree. I decide to be German and wear socks with my sandals rather than be hot in walking shoes when things warm up. I can take them off later. It turns out to be an excellent solution. Jean Michel assures me that I don’t look too terrible. 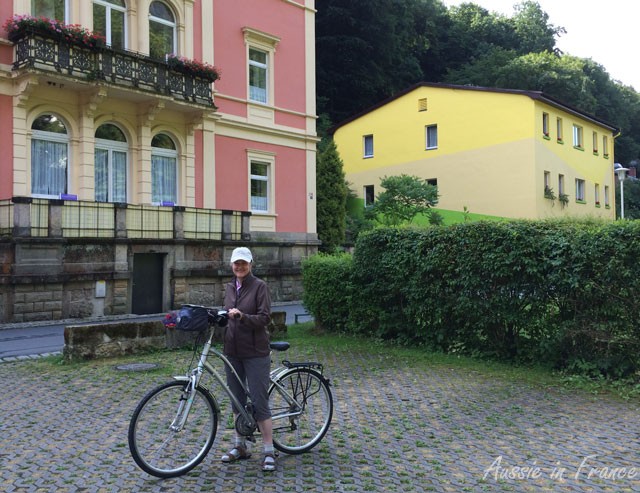 Today we’re going to Pirna, about 25 K along the Elbe towards Dresden. The bike path is the sort we like – close to the river and free of traffic most of the way. We have wide sweeping views of the Elbe. 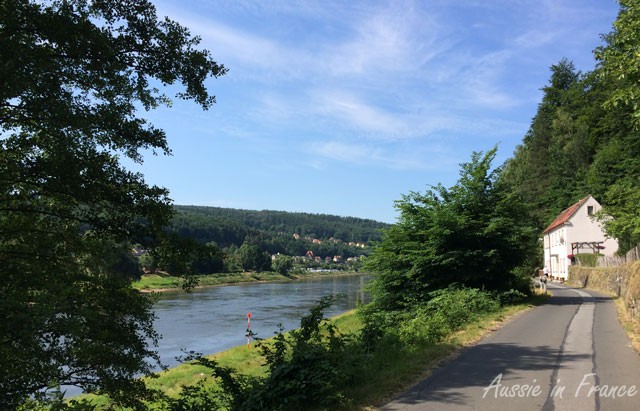 Our first stop is Konigstein, with its famous castle which we will visit by car another day. It’s a long way up the hill on a bike. We cross the Elbe on a small ferry with a large number of other cyclists. The cycling population has changed – a little younger and a little fitter. We don’t see many electric bikes either. Also, everyone seems to be German. 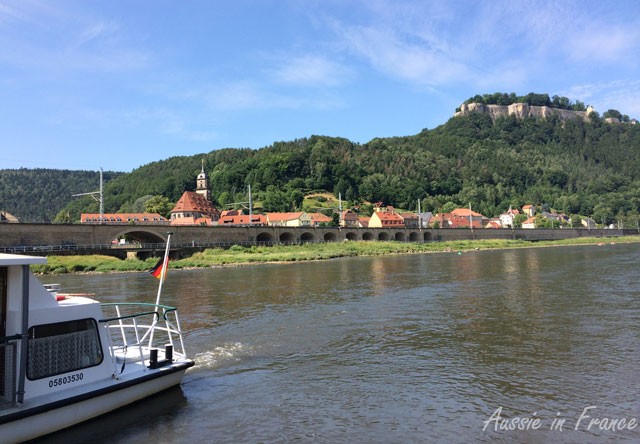 We cycle round an S-bend to Kurort Rathan and take another, much bigger ferry, pulled by a cable, and cheaper. Up above us soar the famous Bastei Rocks, with their incredible formations, that we will also visit by car another day. 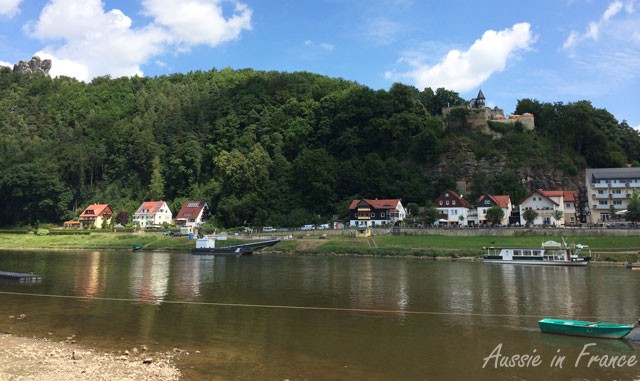 The next village is Stadt Welhen with an attractive central platz completely taken up by restaurants except for the Rathaus (rat means council and not a little rodent as you would imagine) with an unusual sundial that is adapted to summer time. 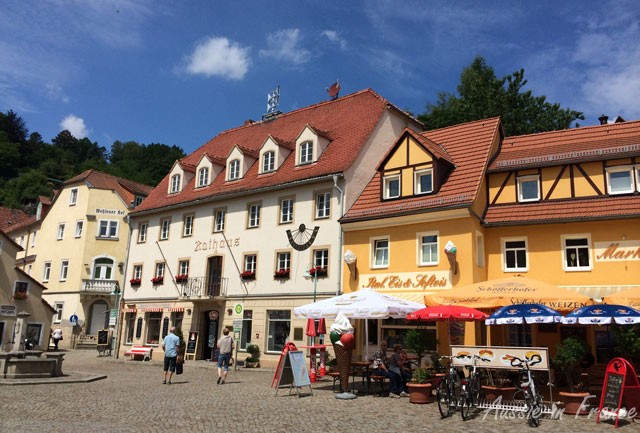 The cycle path takes us past riverside homes with beautiful gardens and alarge number of ferienwohnung (holiday flats), many of which are frei (vacant). We wonder why there was so little available in Bad Schandau. 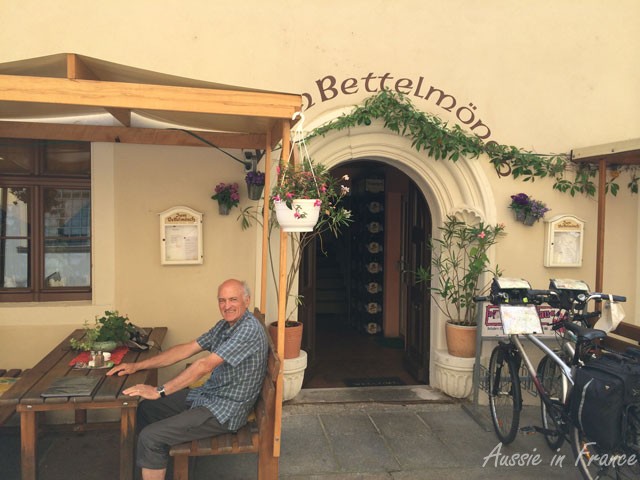 By the time we reach the centre of Pirna, it’s about 1.15 pm so our first priority is to find somewhere to eat.  We ignore all the fast food places and turn down a side street with an inviting-looking restaurant at unbeatable prices. As usual, there is a bike stand at the front. We choose pork medallions and mushrooms which turn out to be quite tasty and are not deep fried. A change from schnitzel. 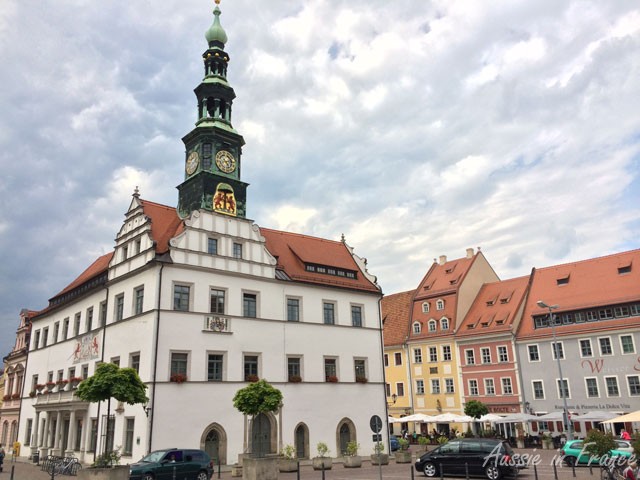 The pretty main square – Marktplatz – turns out to be just at the end of the street. We get a few brochures from the tourist office for our travel log and visit St. Marien Kirche with its stunning vaulting that reminds us of Gaudi’s Sagrada Familia in Barcelona. Maybe it was a source of inspiration. 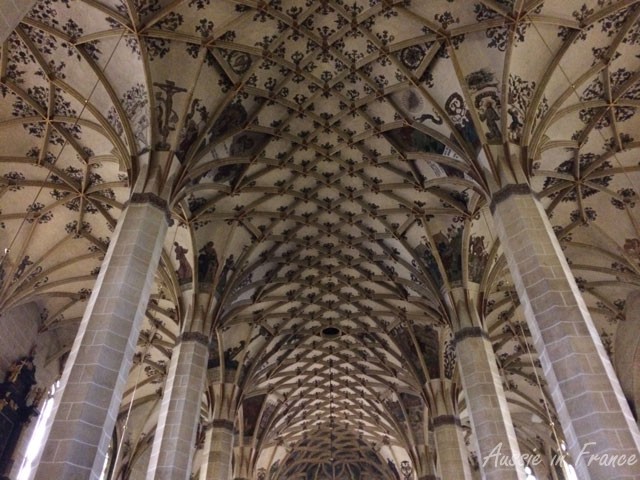 Fortunately our transit day seems to have improved my saddle soreness and the remaining 25 K aren’t nearly as bad as I feared. It starts spitting after a while but we’re not too worried because we have our capes. It turns out we don’t need them. 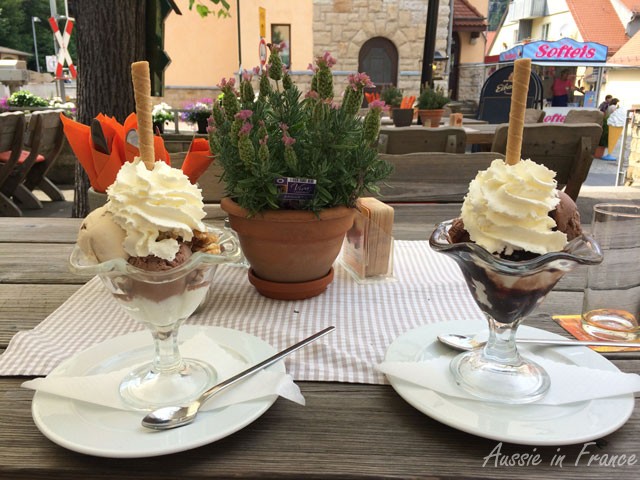 On the way back, we decide not to take the ferry at Kurort Rathan, and treat ourselves to an ice-cream Sunday. The young waitress speaks good English which is a reilef. There are so few foreign tourists here that everyone naturally talks to us in German. The lady who runs the pension doesn’t speak any English at all. 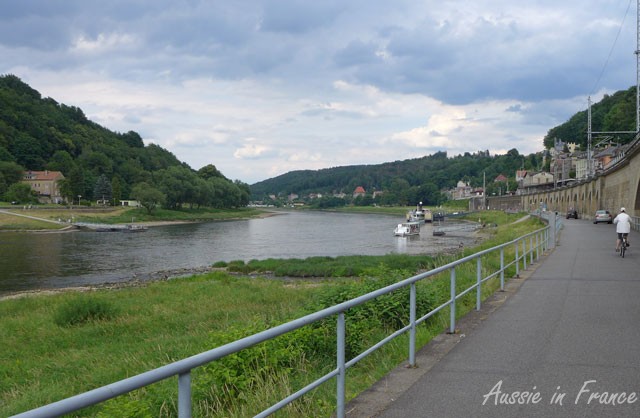 Our ice-creams stand us in good stead because the bike path from Kurort to Konigstein is like a roller coaster. Then we have to sprint down to the landing stage to catch the ferry. This time, there are only a few bikes and cyclists. I wonder where everyone has disappeared to? 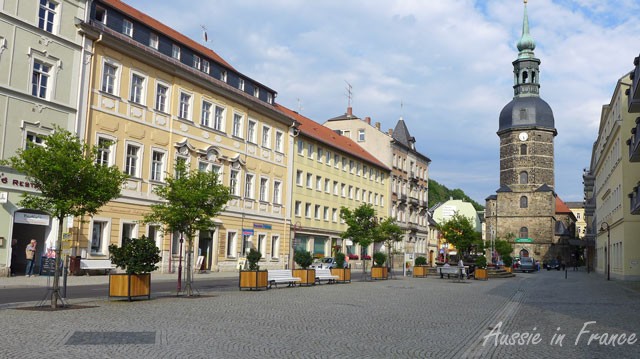 We arrive back at the unusually early hour of 6 pm and have a glass of trocken riesling and pistachios in our room followed by cheese and salad and some delicious cherries we bought on the way home.

Tomorrow, we’re off in the other direction – to Czech Republic – but our bike map stops at the German border so we’ll see how we manage!