Azay-le-Rideau has always been one of my favourite châteaux in the Loire Valley although it doesn’t have the majesty of Chambord, Chaumont or Chenonceau, which is not surprising because it’s not a royal castle. The original fortress was bought  by a rich financier called Gilles Berthelot in 1510. After marrying Philippe Lesbahy, a rich heiress – Philippe was a popular woman’s name in Renaissance times – he embarked on a flourishing career under François I. 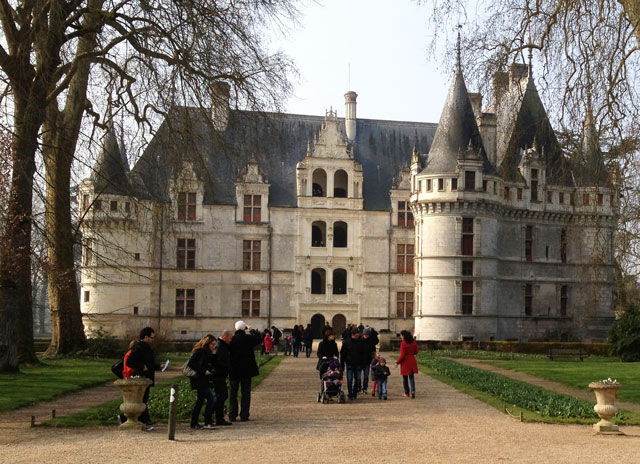 Built on an island in the Indre River and considered by many to be a “jewel of the French Renaissance”, Azay-le-Rideau  combines the Italianate and French styles. The main central staircase with its three levels of loggias was one of the first examples of straight rather than spiral stairs in France. 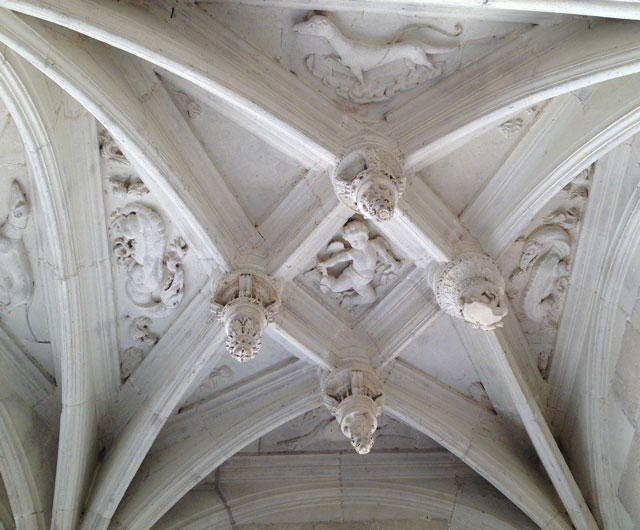 One of the ceilings over the main staircase

The interior of Azay-le-Rideau is more sober than most of the larger châteaux and one of its most striking features is its monumental fireplaces of which there are many different types. 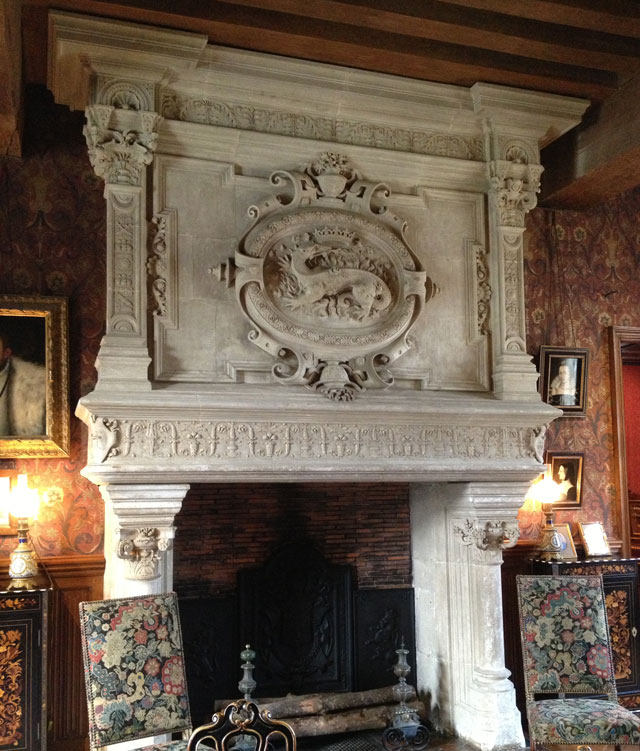 One of the monumental fireplaces with François I’s emblem, the salamander

The château was abandoned after the French revolution and redecorated by the Marquis de Biencourt. In 1898, the 4th Marquis had to sell out and it was not until it was bought by the State in 1905 that renovation began. 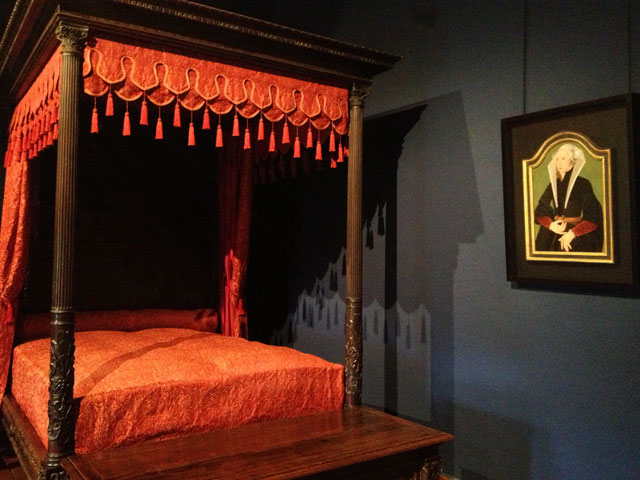 Four-poster bed in the master bedroom

Now most of the rooms are decorated in the 19th century neo-Renaissance style, but the royal apartments still have some older pieces. 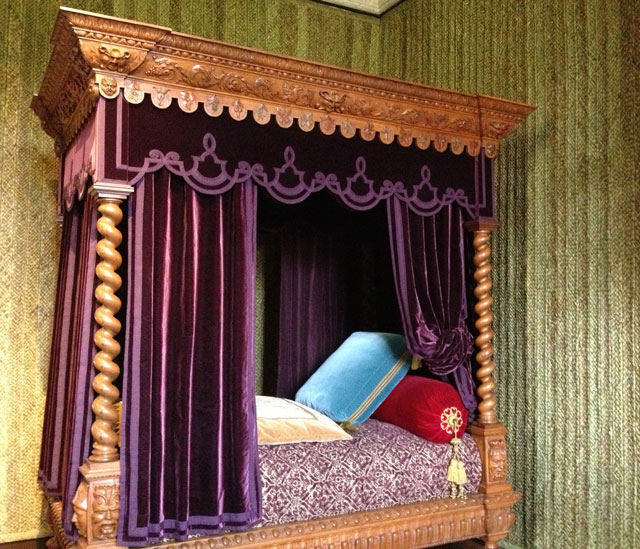 A recent and extremely interesting addition as I mentioned in Easter Sunday in Château country, is Philippe Lesbahy’s bedroom. The beautiful neo-Renaissance four-poster bed  dates from the 1840s and is sumptuously decorated. All the brightly coloured soft furnishings are copies of originals depicted in contemporary paintings. The large blue cushion, for example, is identical to that in Maître de Flore’s La Naissance de l’Amour. The trimmings are all handcrafted. 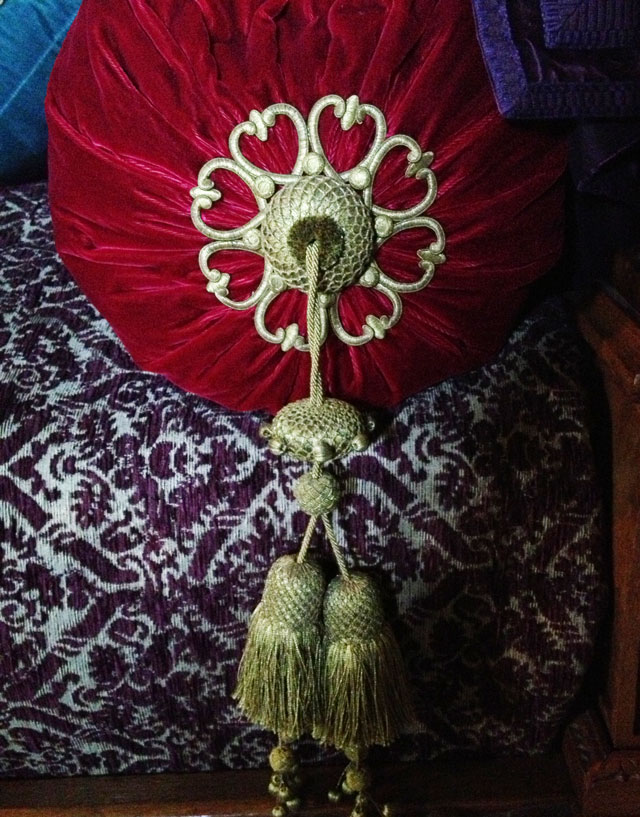 The extraordinary cartisane at the end of the red velvet bolster is a work of art in itself. The original can be seen in Toussaint Dubreuil’s Hyante et Climène. It alone required 58 hours of work! The feather counterpane cover is made of “oignon-skin” silk velvet and has intricate hand-made buttons. 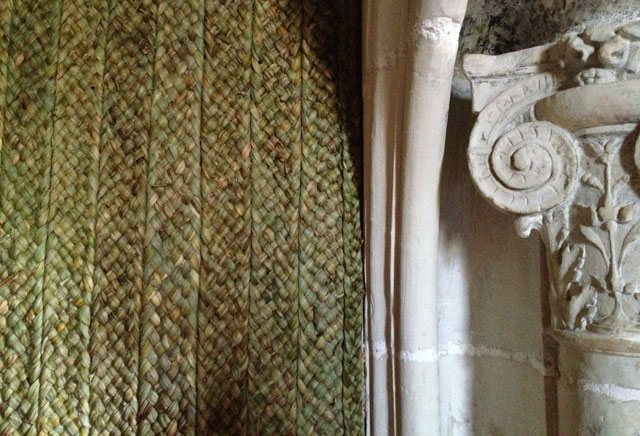 Rush matting next to monumental fireplace

The walls are covered with traditional braided rush matting very popular in France in Renaissance times because it kept the room warm in winter and cool in summer. In the painting entitled Dame au Bain in the next room, you can see herringbone rush matting in the background. No examples of rush walls have survived in France, but there is one at Hampton Court in England, which was used as a model. The hand-braided rushes were collected in Bedfordshire. 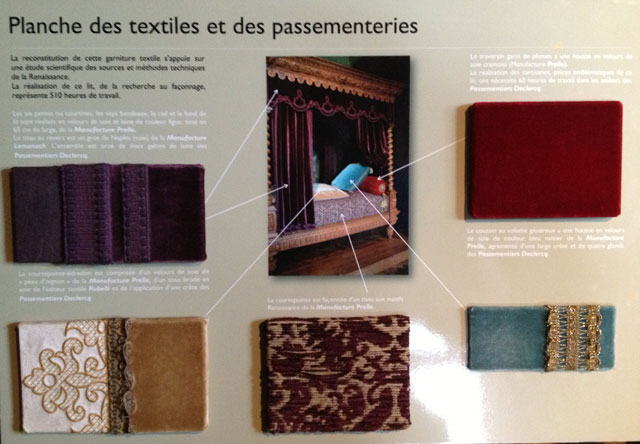 There is a fascinating and extremely informative video in the bedroom showing how all the different furnishings and matting were made as well as a panel with samples of the materials used. 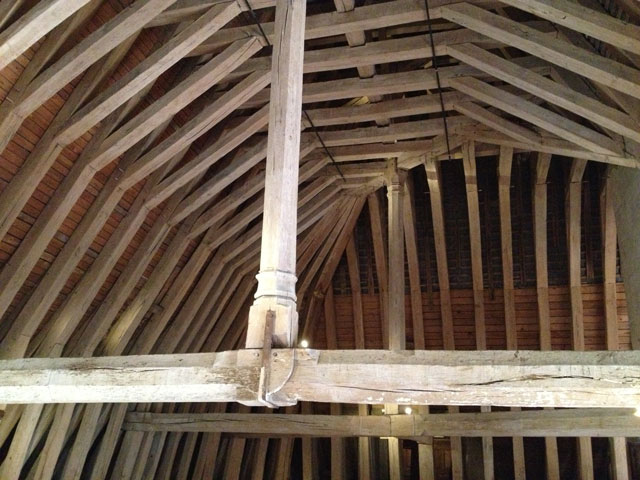 Another exhibition has been added since my last visit as well. The roof space, opened a couple of years ago after major restoration, is the most remarkable example of Renaissance master carpentry now on show. 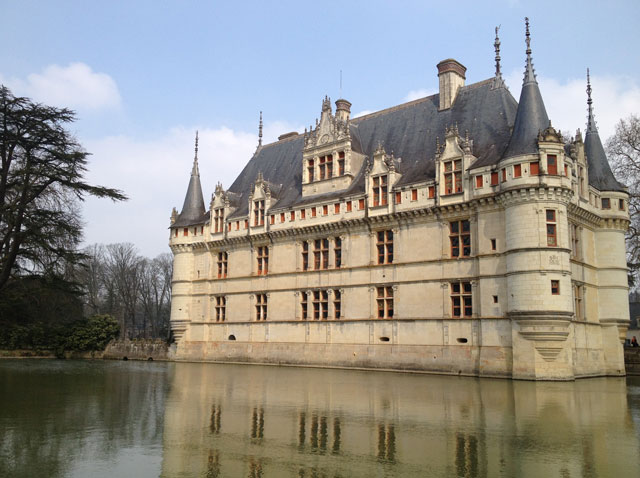 Azay-le-Rideau reflected in the “mirror” moat

The actual location of Azay-le-Rideau contributes very largely to its charm. The natural moat forms two mirrors of water reflecting the ornately sculpted frontons and pointed roofs of the château. The lovely  jardin à l’anglaise or landscaped garden is the perfect place to wander through on a fine day.