This week’s Blogger Round-Up starts in the city of Nice on the French Riviera with Phoebe from Lou Messugo who shares her stunning photos of Nice Carnival. And to give you another view of Nice, Margo Lestz, writing for The Good Life France, explains the origin of The Bay of Angels and other place names. In a different part of the country altogether, Susan from Days on the Claise tells us the fascinating history of Van Loos’ painting of The Three Graces in Chenonceau. Enjoy! 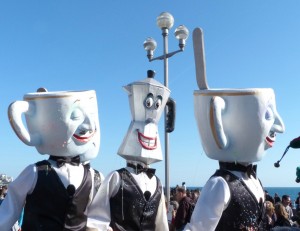 We couldn’t have asked for a more perfect day to go to Nice Carnival 2014.  Under the bluest of blue skies we spent a fun afternoon watching the the creative, witty and satirical floats pass by united under the theme of gastronomy.  Being our 5th or 6th time at Carnaval we recognised some of the regulars – the roaring dragon, the confetti seller who comes to the school fête, the OGCN (Nice football team) supporters with balloon boobs, the man dressed as a caveman hauling a ragdoll around, the Italian flag throwers – we felt like real locals.  As always the floats represented contemporary issues and cultural icons. Amongst others Angela Merkel could be seen devouring Portugal, Spain and Greece. Read more

Adam and Eve in the Bay of Angels, Nice

by Margo Lestz writing for The Good Life France, an independent on-line magazine about France and all things French, covering all aspects of daily life including healthcare, finance, utilities, education, property and a whole lot more. Margo  lives in Nice, France where she likes to bask in the sunshine, study the French language and blog as thecuriousrambler. 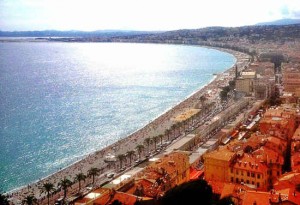 Many rich and famous tourists visit Nice every year, but according to a legend, the first visitors were actually Adam and Eve – yes, the ones from the Bible.

As the story goes, after they were kicked out of Paradise for being naughty, they were standing outside the locked gates looking at their new hostile surroundings.  Everywhere was barren and inhospitable. They had no idea where to go or what to do. Then they heard the sound of rustling wings, looked up to see a band of angels flying overhead motioning to them.  The angels flew across the waters and hovered over a certain spot – they were showing the couple a glorious bay, in front of a land that was as lush and beautiful as the Eden they could no longer enter. Read more 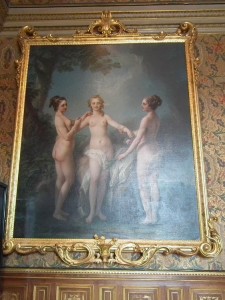 There is a large painting depicting three naked women hanging in one of the salons of Chenonceau. It’s called The Three Graces and is by Carle Van Loo (not his brother Jean-Baptiste, despite the frequency you will find it attributed to him on the internet). It is widely believed to depict three of the five de Nesle sisters, but since it is clearly a picture of three attractive young women, there is a certain amount of debate about the identification of the notorious sisters and the subject of this painting. The de Nesle sisters, with the exception of the youngest, were not considered to be beauties, were all long dead by the time the picture was painted and Van Loo wasn’t known for being kind to his subjects. Read more

4 Responses to Weekly Blogger Round-Up: Carnival time in Nice – The Bay of Angels in Nice – Van Loos’ The Three Graces