Zagreb – a City of Contrasts

Posted on September 24, 2015 by Rosemary Kneipp

We’ve been to Croatia before – in 2011 – but didn’t get as far as Zagreb so it’s been on my list for a while. We mainly visited the coast: Split, Dubrovnik (with an excursion into Mostar in Bosnia Herzegovina), Zadar, Sibenik and Plitvice Lakes (which is one of my top sites in the world) and Pula and Porec in Istria. We then went to Ljubljana, which I loved so it’s a bit frustrating to be whizzing through Slovenia on the motorway without stopping especially as the sun’s come out. 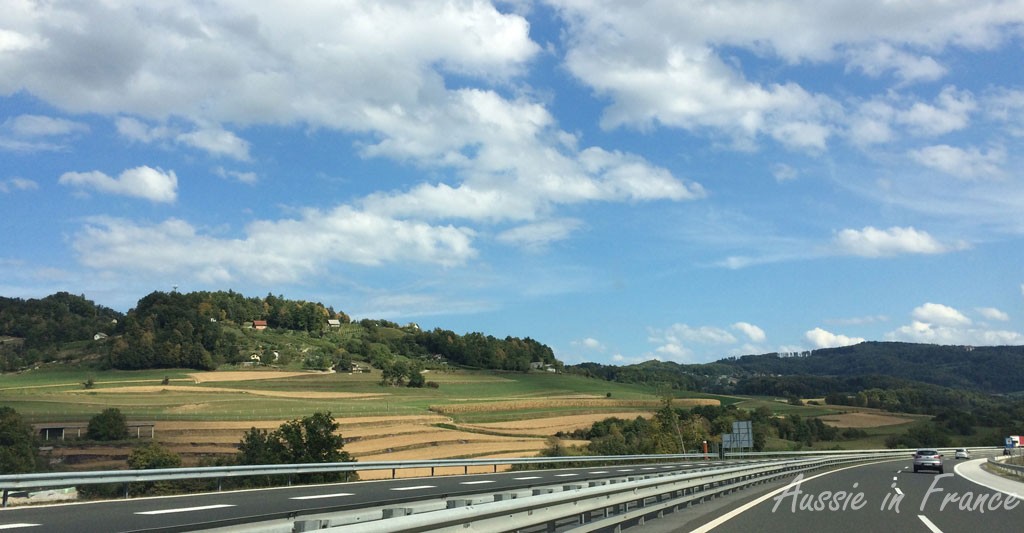 Whizzing past typical Slovenian countryside on the motorway

We’re staying two nights in an apartment in Zagreb because there are practically no hotels in the centre. Parking also seems to be a problem but there is a cheap covered parking lot less than 10 minutes walk from the apartment which is another 10 minute walk in the other direction from the historical centre. 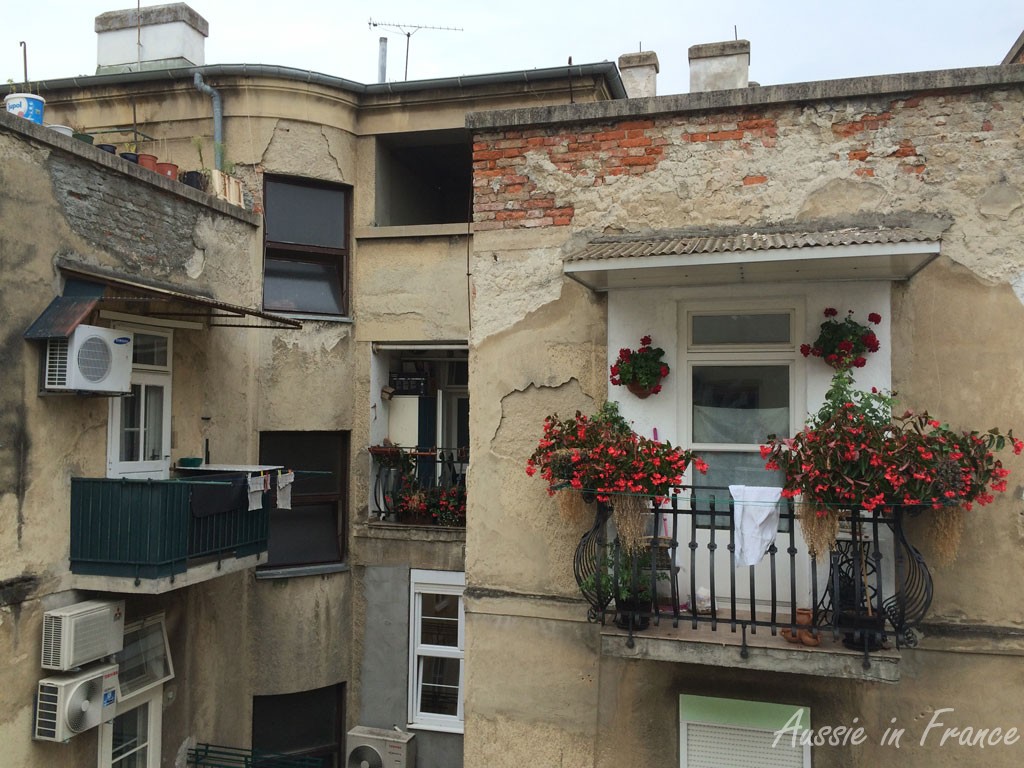 Our view from the little balcony of our apartment

This is not Italy as far as apartments go, but it’s not the same price either. In Arqua Petrarca, we paid 100 euro a night against 66 euro here. Our Aba Zagreb apartment is spacious and clean (except for the windows), the bed is comfortable, the shower head needs soaking in vinegar to unplug the clogged holes, the floor between the bedroom and bathroom is warped and cracks at night when you walk on it and there is only two or three of everything (cups, plates, etc.) but otherwise it’s fine because we have our own vegetable peeler, kitchen knives and bread knife. I’m not quite sure how the apartment got it’s 9+ rating on booking.com! 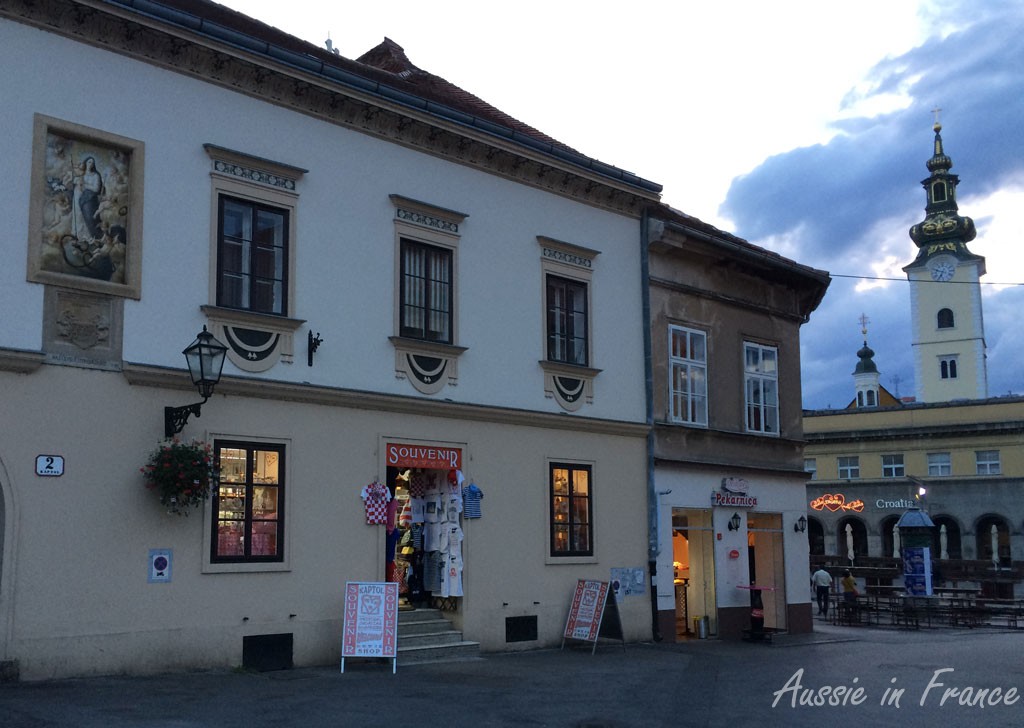 By the time we get settled, it’s dusk so we make for the old town. I always find that a bit of an adjustment is needed when we enter a former eastern block country because of the many contrasts between old and new, delapidated and renovated. Zagreb is no exception The historical centre is appealing though and we have a glass of wine near the market. – the glasses are 0.10 l and there are no nibbles to go with them. Next to us, a dozen or so young women are obviously celebrating something and have a photographer with them. 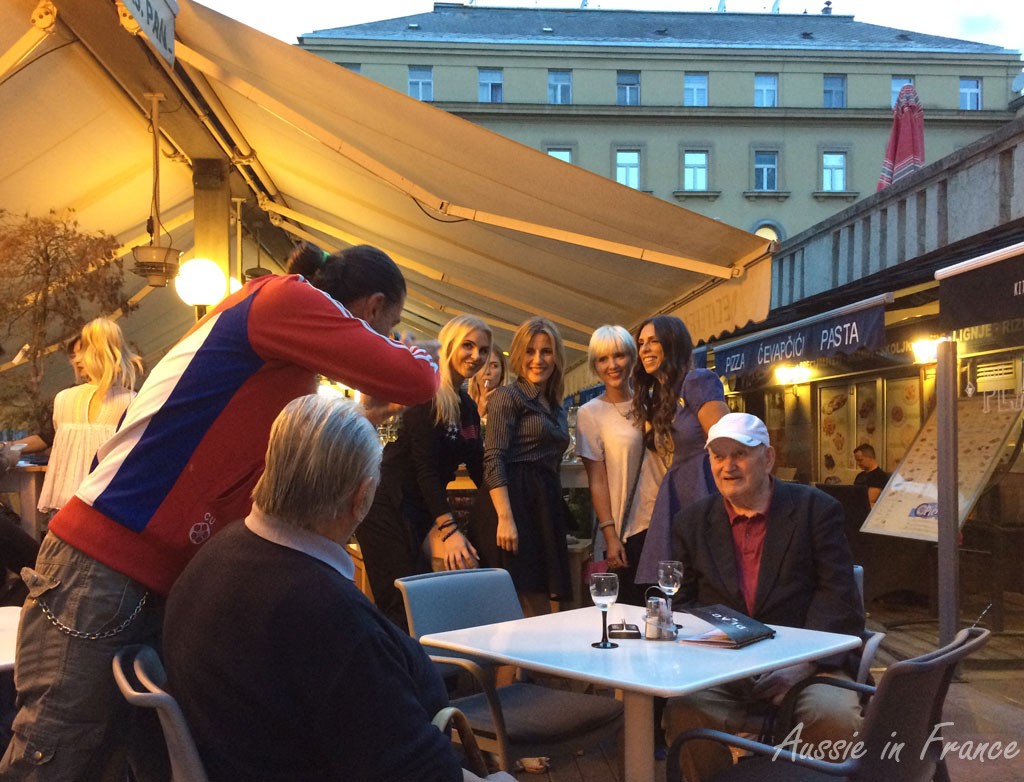 We make a mistake about dinner and end up paying 60 euro in a restaurant recommended by Le Routard (Balthazar) as being “medium priced” and serving local dishes. My entrée is frankly awful but Jean Michel has delicious pasta and freshly picked boletus mushrooms. We then have a small entrecôte with grilled vegetables accompanied by a house wine. 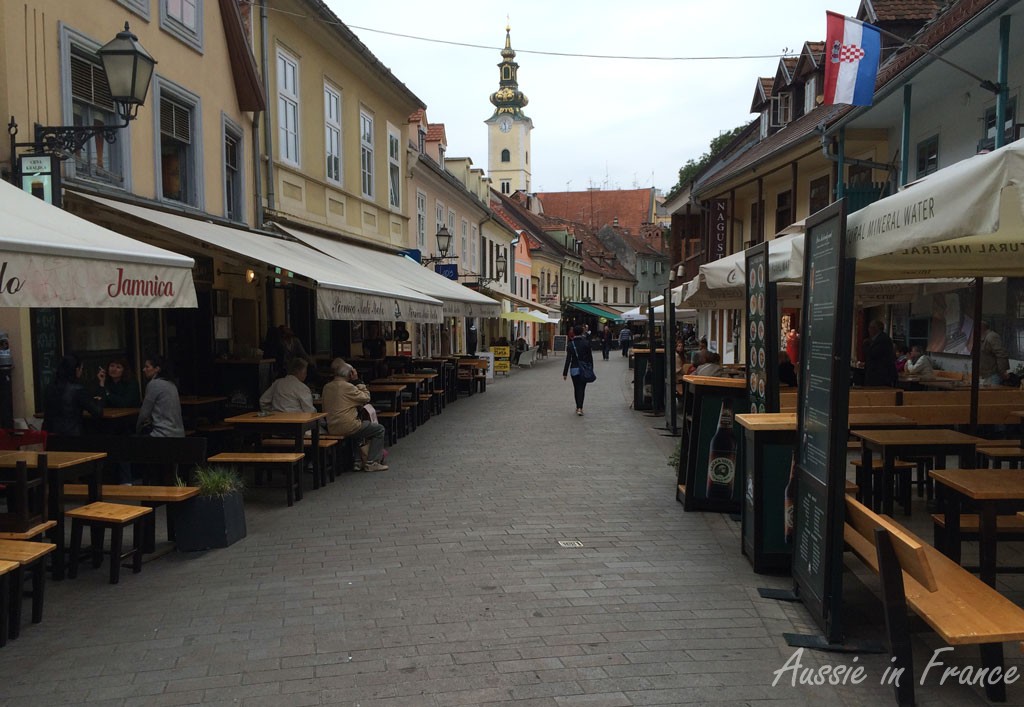 It’s next morning and we start with a cappuccino in the “café” street , Tklaciceva, which was once a river separating the Kaptol and Gradec quarters. 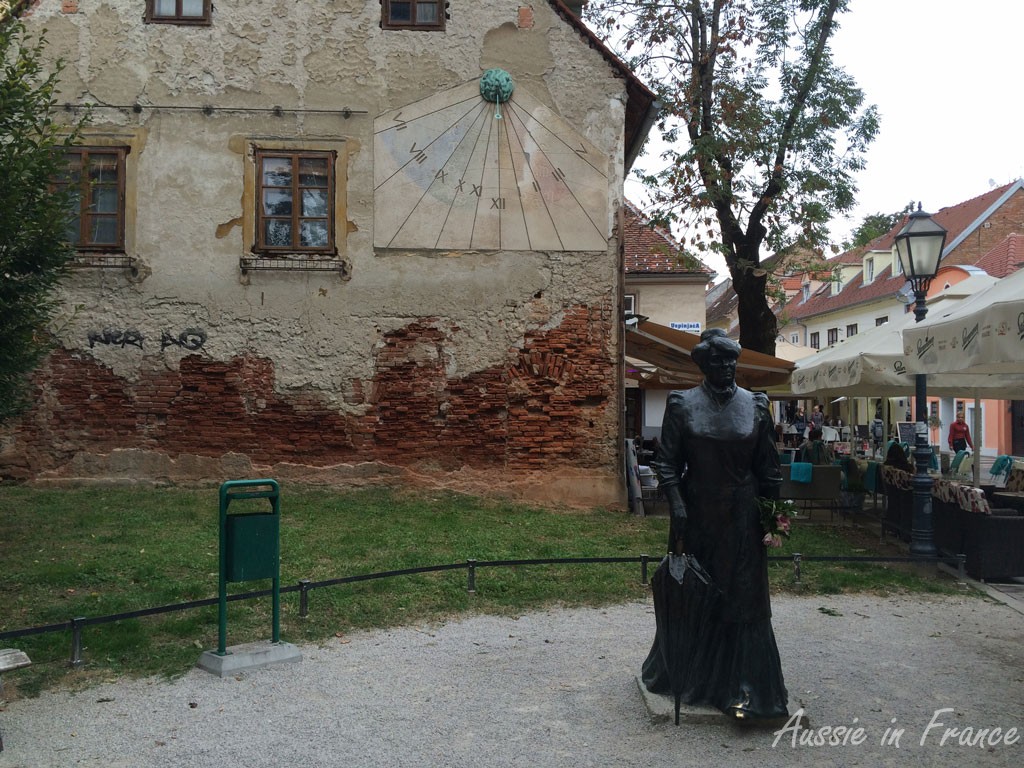 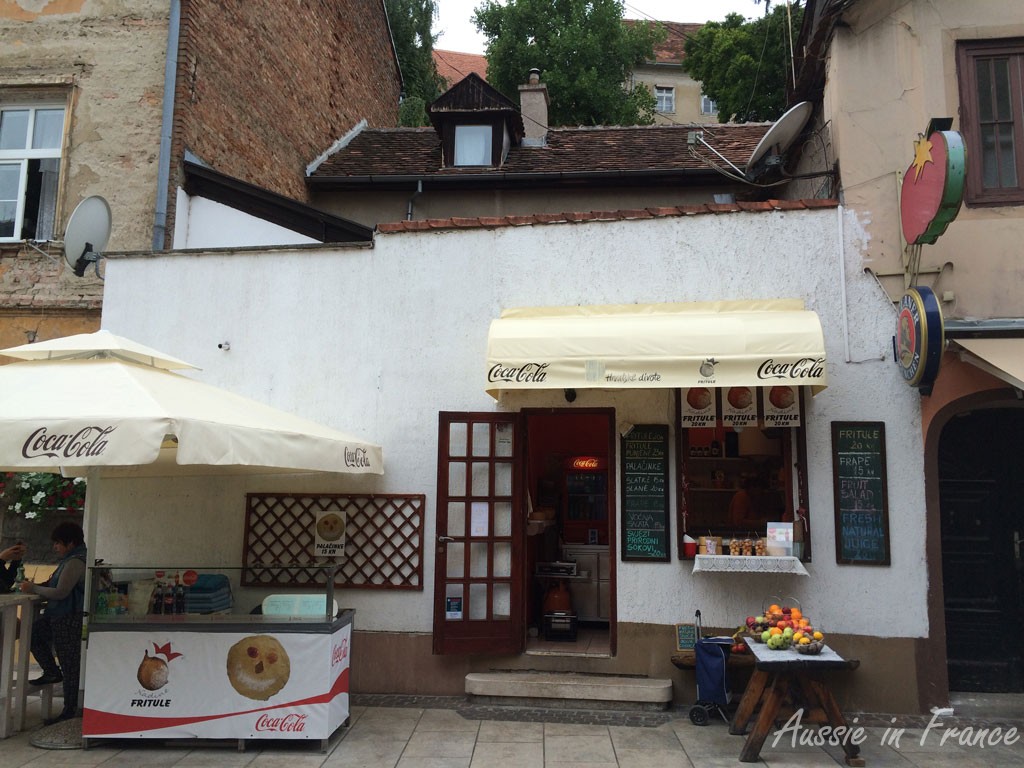 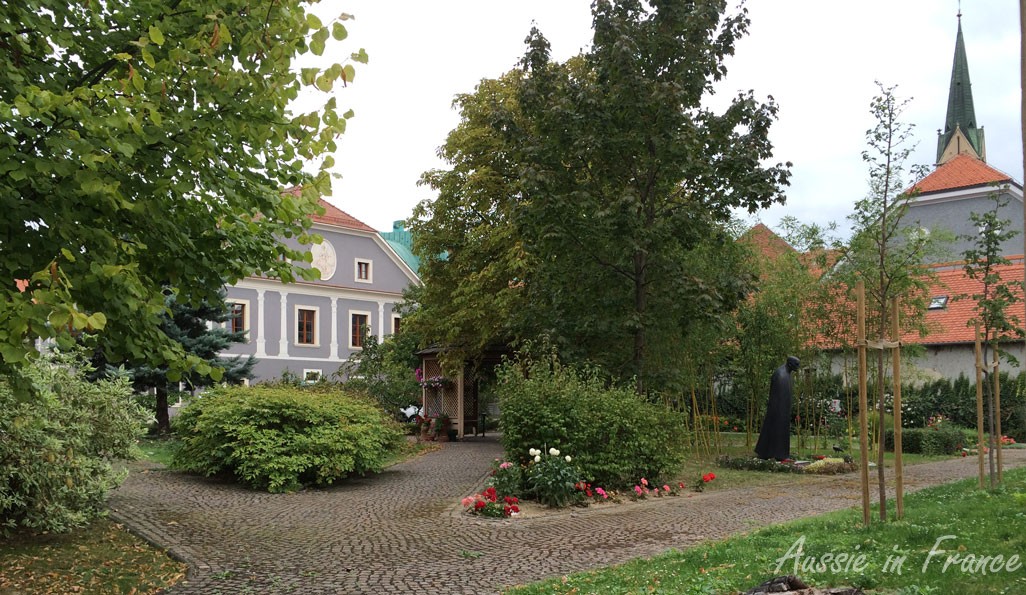 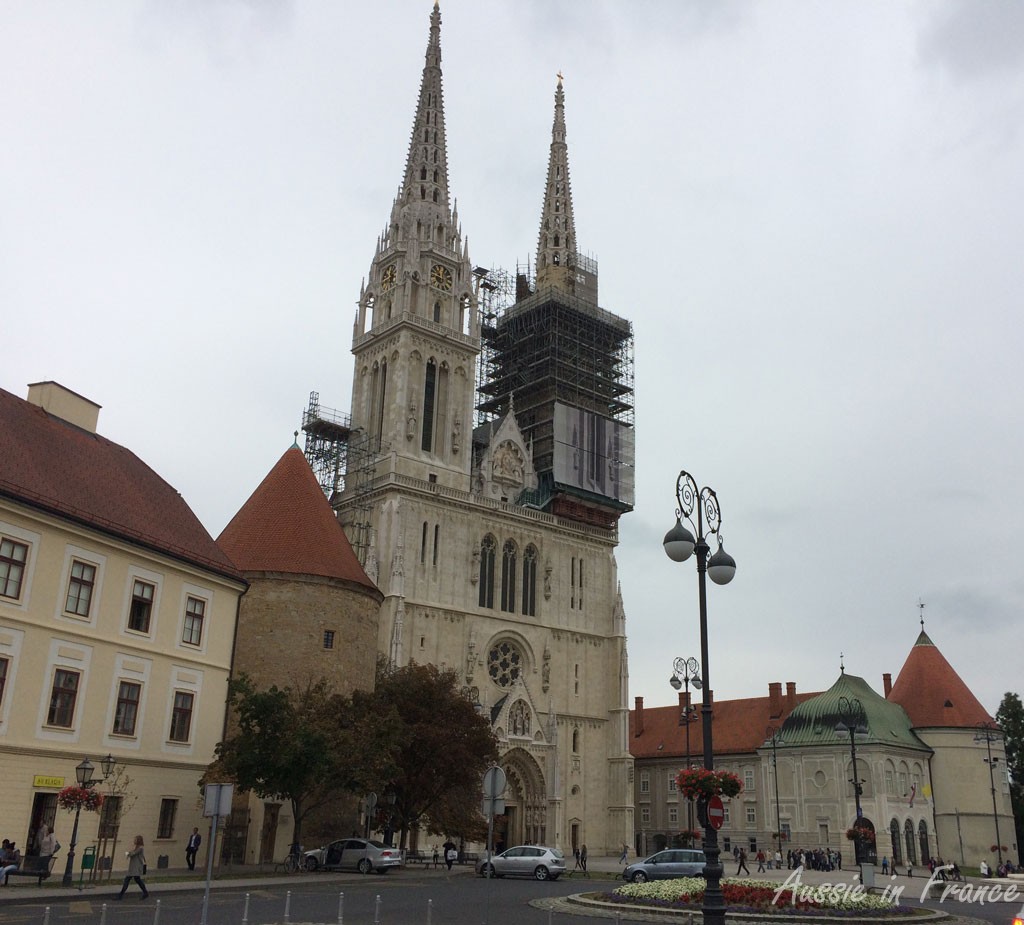 We go back to Zagreb Cathedral to visit the inside. It has led a chequered existence and was once at the mercy of the Ottaman invaders, which explains the towers on each side which are part of a fortified wall , the front part of which has been demolished. 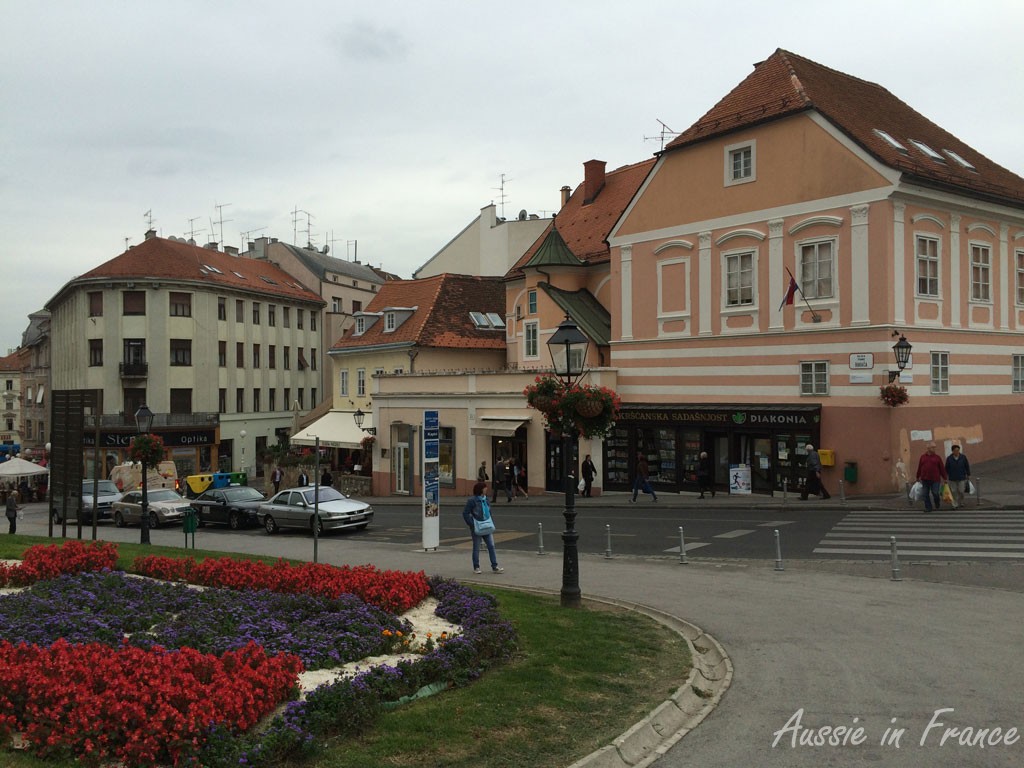 The buildings on the other side of the cathedral square 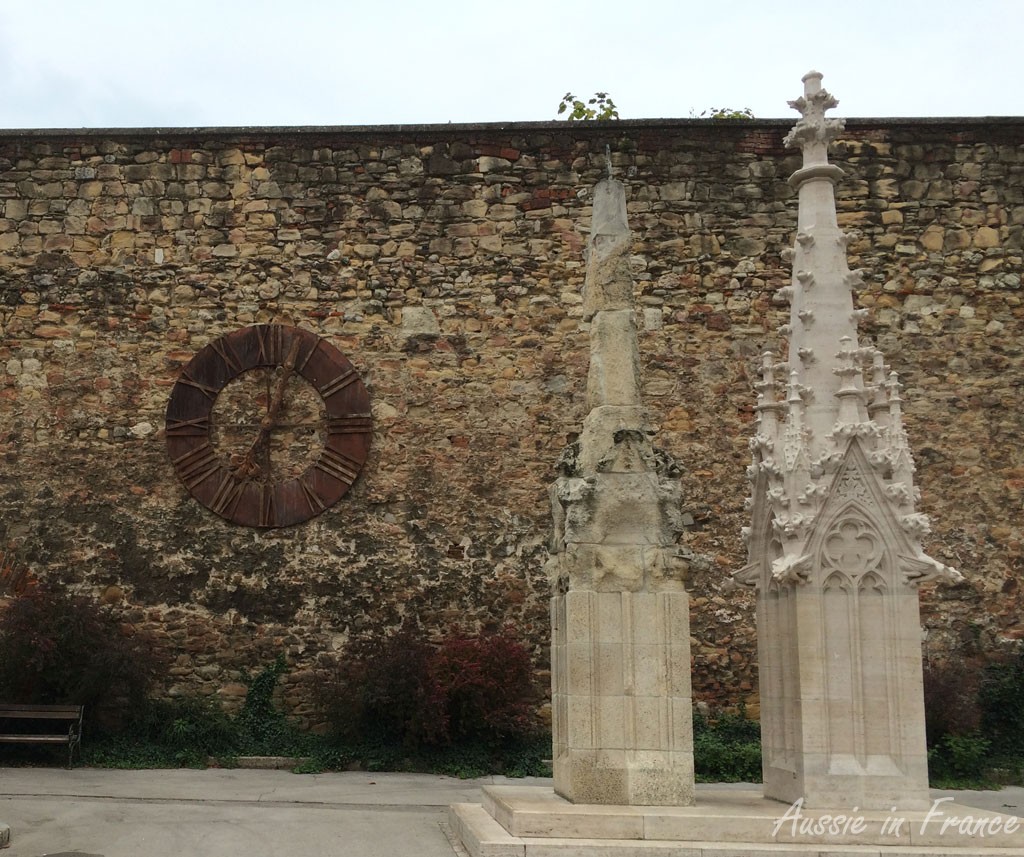 Comparison of renovation and non-renovation

We return to Dolac market and are surprised to see so many local producers selling their own fruit and vegetables, We buy some figs, grapes and green beans from three different vendors. 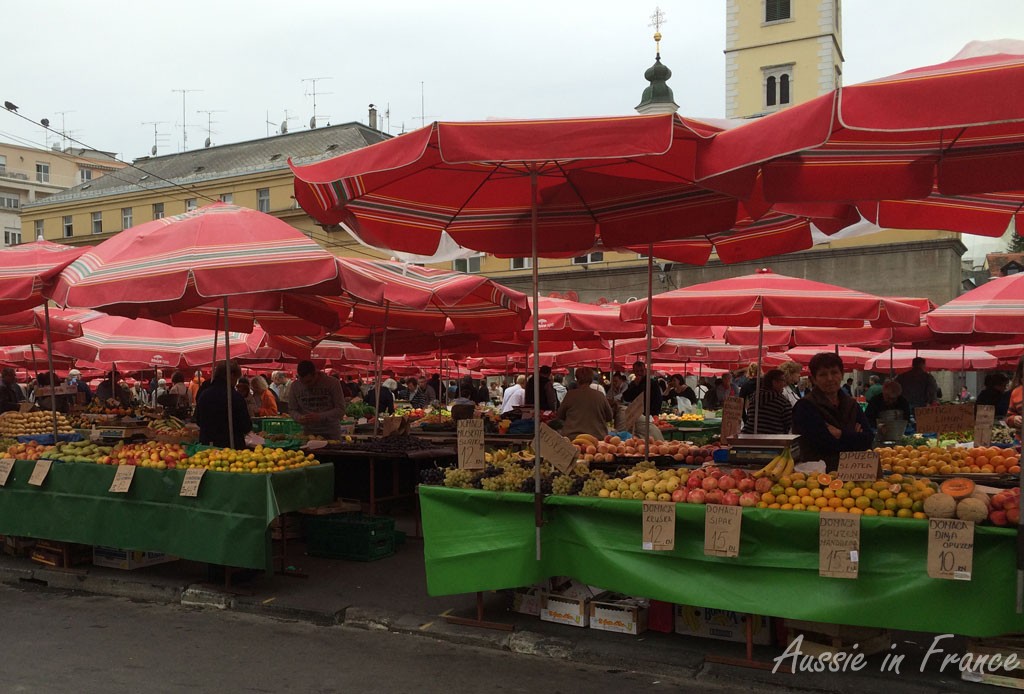 We find a place for lunch called Nokturno that costs a quarter of last night’s meal and is just as satisfactory. It’s certainly “local” in any case. 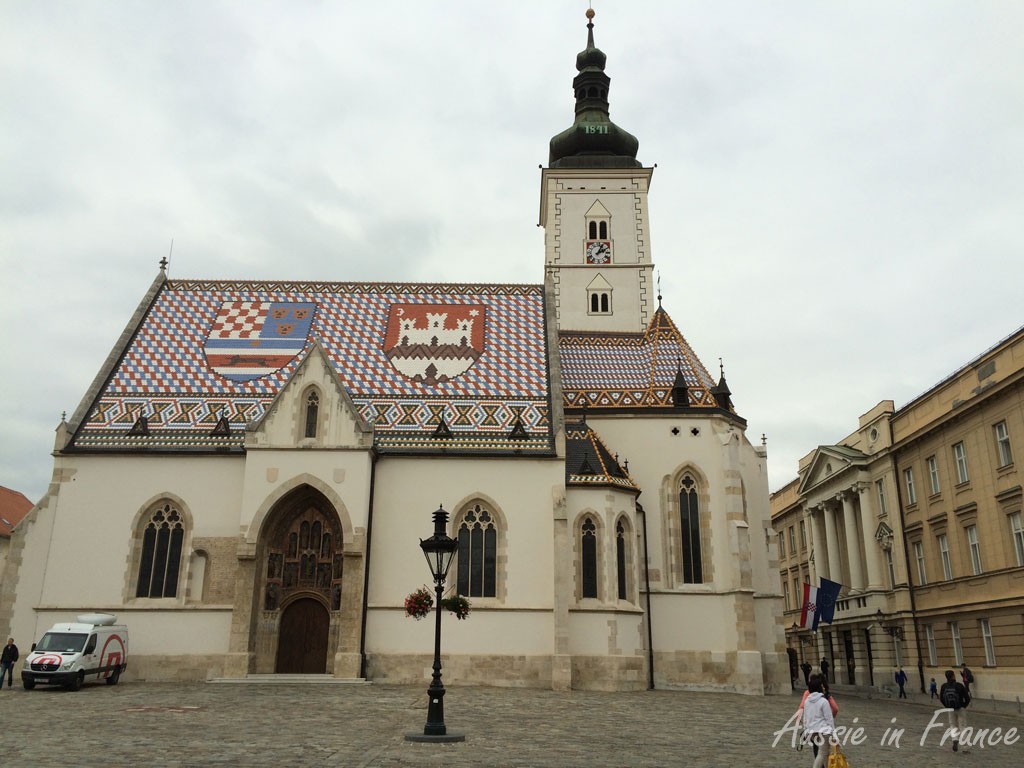 We walk up the hill to Saint Mark’s with Parliament House on one side and Ban Palace on the other. Something is going on. There is a TV reporter and a small group of demonstrators. I hear the word “discrimination”. We go in search of a wrought-iron gate mentioned in our guide book and designed by Herman Bollé. Just then a downpour begins and we duck under a porch. The weather forecast said overcast but no rain so we don’t have an umbrella. Sigh. 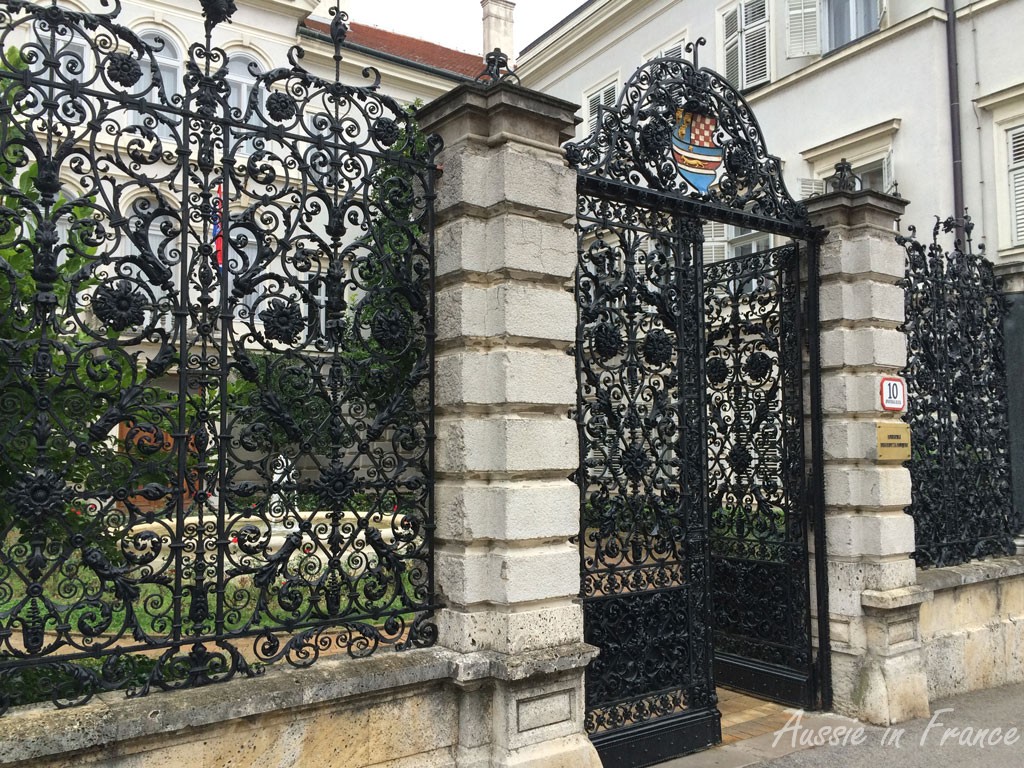 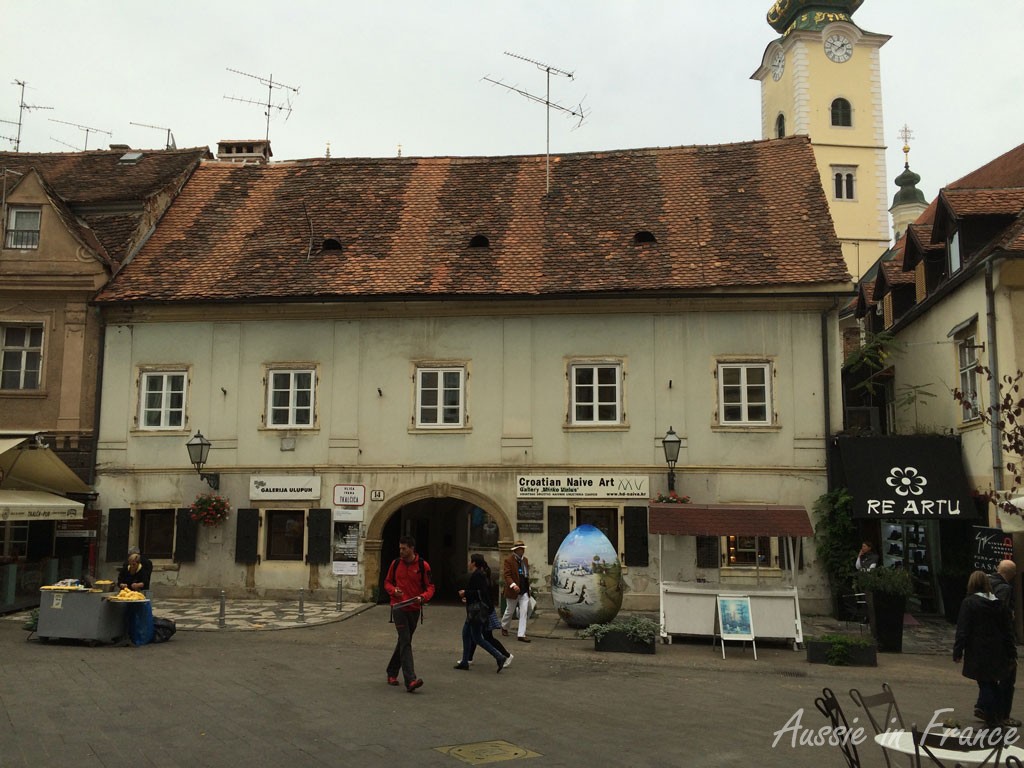 Sweet corn sellers at the end of Tkalciceva street

We make a dash for a café and have an espresso while waiting for the rain to stop. We talk about our next destination. This morning we had decided to drive to Split on the Adriatic and take the ferry across to Ancona in Italy, because of the current immigrant problems and the large number of border controls being restored in this part of the world but we now think we should go to Serbia anyway and resume our cycling itinerary along the Danube. 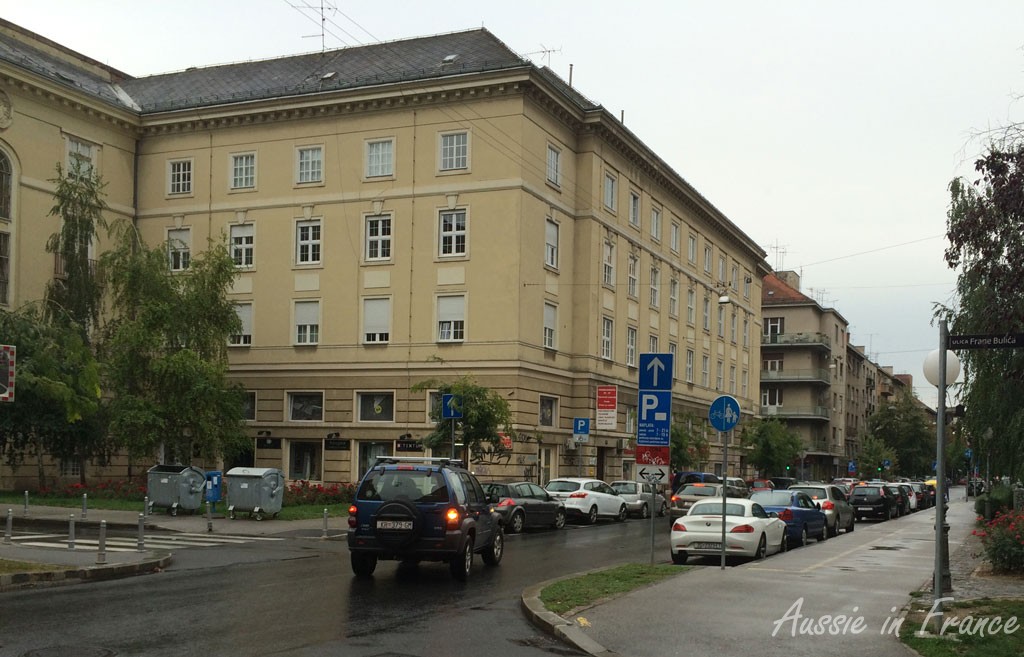 The outside of our apartment building

We go home and check the weather forecast. We learn that the temperatures are going down in most places along the Danube in this area over the next few days, then going up again next week. So we book a hotel for a night on the Danube in Belgrade for an astonishing 31.50 euro. The Serbian capital is only about 3 hours away so we’ll be able to cycle along the river and visit Belgrade by bike in the afternoon then move on further the next day, perhaps to Vidin where it’s supposed to be warm and sunny. Keep tuned!

9 Responses to Zagreb – a City of Contrasts