We are up bright and early at our beautiful Shahpura House Heritage Hotel in Jaipur so we can have breakfast and be ready to leave at 8 am because today is a big day – my first elephant ride! Our excellent Himalayan driver, Rajendar  Negi from Trinetra Tours, is waiting for us with our new French-speaking guide, Praveen Agraval, our best guide so far. A native of Jaipur, his French is excellent and he is obviously very experienced. and knowledgeable about his city. 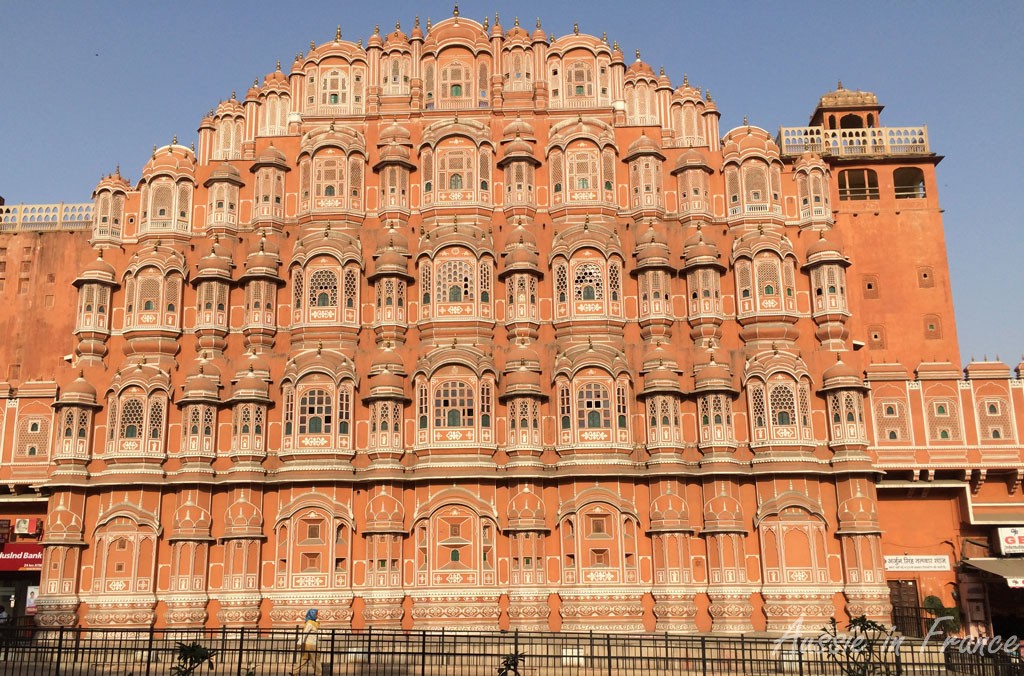 We start with a photo shoot of Hawa Mahal, or the “Palace of Breezes” so named because it was built so that the women of the royal household could observe street festivals without being seen from the outside. Made of the ubiquitous red and pink sandstone of Jaipur, it is on the edge of City Palace. Praveen helps us to cross the street, telling us to keep to his left so that he is screening us from the traffic so that he will get hit first – there is no other way to do it!

Our next destination is the Hindu temple of Govinda Dev Ji devoted to Lord Krishna. Praveen asks us to go quickly through Tripolia Bazaar so don’t miss prayer time. We leave our shoes and follow the massive crowd. I stand with the women in front, a full head above the others, while Jean Michel stands with the men behind. There is music and singing and much joyous jostling. 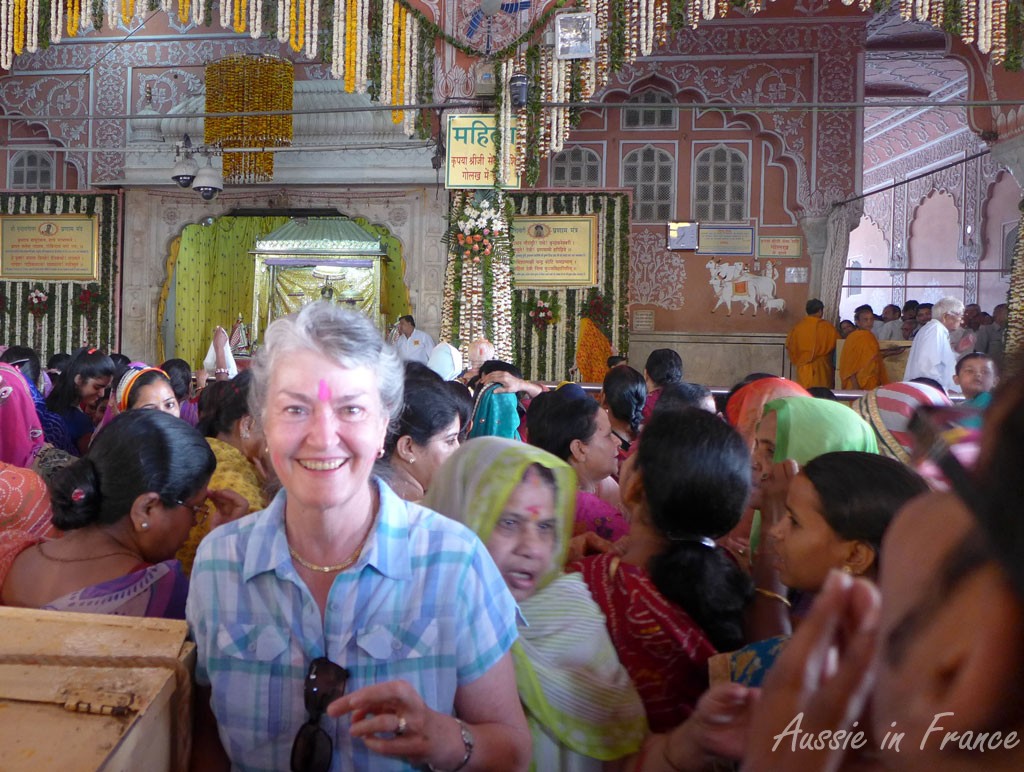 As the prayer ends and people start to leave, a woman in front of me turns round and says “Happy holi” and smears pink powder on my forehead and cheeks. Holi, we learn from Praveen, is a two-day spring festival of colours or sharing love held held at full moon in late February/early March. This year it starts on 23rd March just a couple of days away.

The Amber Fort in Jaipur

We drive out of town 11 kilometers to Amber Fort also called Amer Palace, located up on a hill and ruled from 1550 to 1614 by Raja Man Singh I. With its extensive ramparts and many gates, it overlooks Maota Lake, the main source of water for the palace. Made of sandstone and marble, it is laid out on four levels, each with its own courtyard. 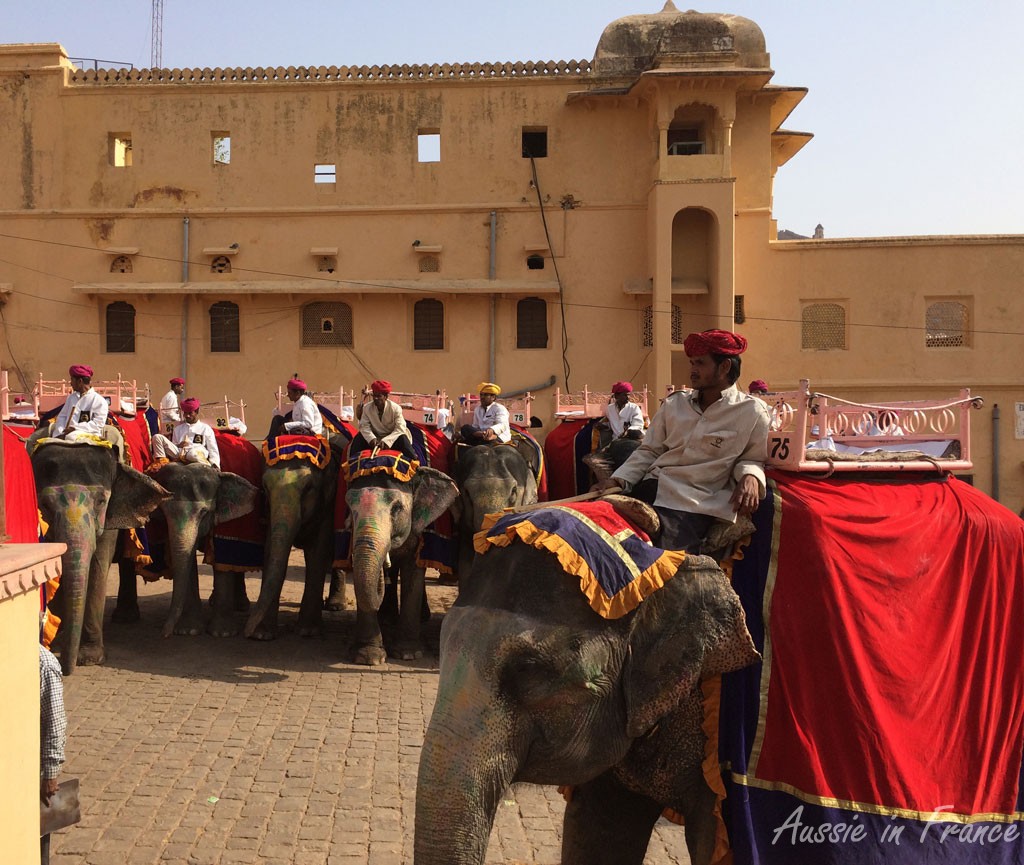 The elephants lined up to take their passengers up the hill to the Amber Fort. You can just see the mounting platform on the left.

The cobbled path up to the fort has become a major tourist attraction because the main way up is by elephant. Praveen goes to get our tickets while we stand in line. A staircase takes us up to a platform so that we are on the same level as the elephants. A bar is lifted so that we can slide backwards onto the elephant then lowered so that we won’t fall off. 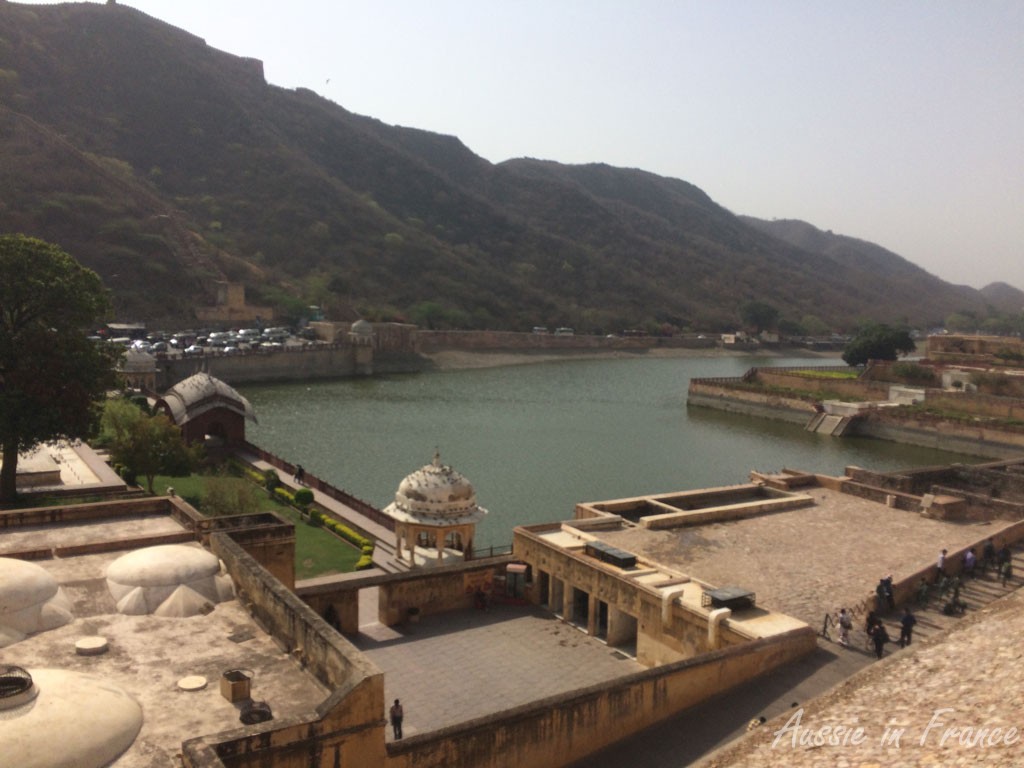 View of the palace gardens from astride the elephant

I am pleased there are two of us because the elephant sways from side to side and it’s a bit scary. It’s hard to keep my iPhone steady so I take the video that I have published in my previous post. The ride takes about 20 minutes. We have to move over towards the edge of the ramparts to let the descending elephants go past which is somewhat nerve-wracking. From time to time, Jean Michel is told to sit back for better balance. 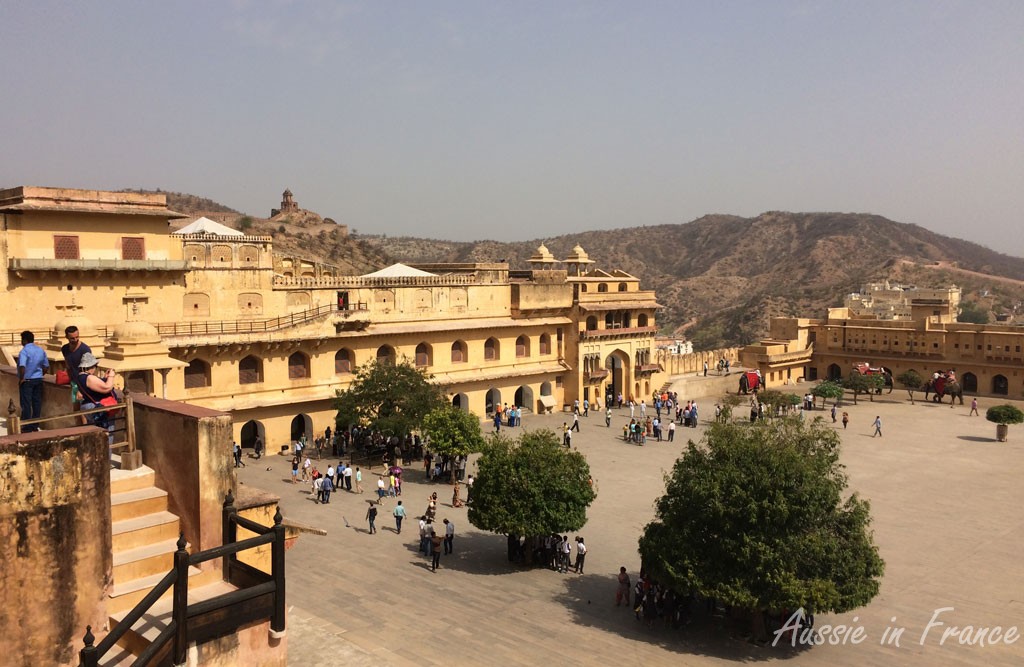 It’s a relief to get up to the top of the hill and into main courtyard where Praveen soon joins us, having walked up from the other side. The palace consists of the Hall of Public Audience, the Hall of Private Audience, the Mirror Palace and the Sukh Niwas where a cool climate is artificially created by winds that blow over a water cascade within the palace. 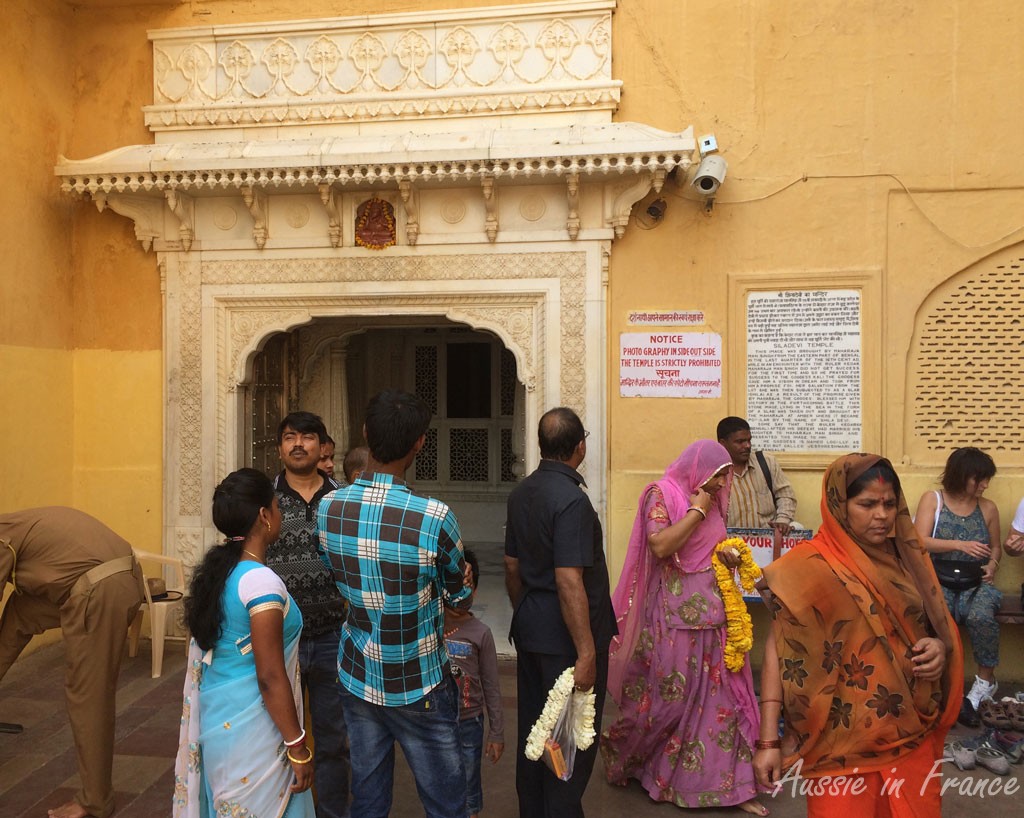 Removing our shoes in front of the temple

At the entrance to the palace there is a temple dedicated to Sila Devi, a goddess of the Chaitanya cult, and given to Raja Man Singh when he defeated the Raja of Jessore (now Bangladesh) in 1604.  We remove our shoes, hand over our camera and enter. We are just in time for a ceremony in which the statue of Ganesh, the elephant, is covered with garlands of flowers and a gong is struck very loudly for ten mind-boggling minutes. I am surprised that the babe in arms next to me makes no protest, but I guess he’s used to it! 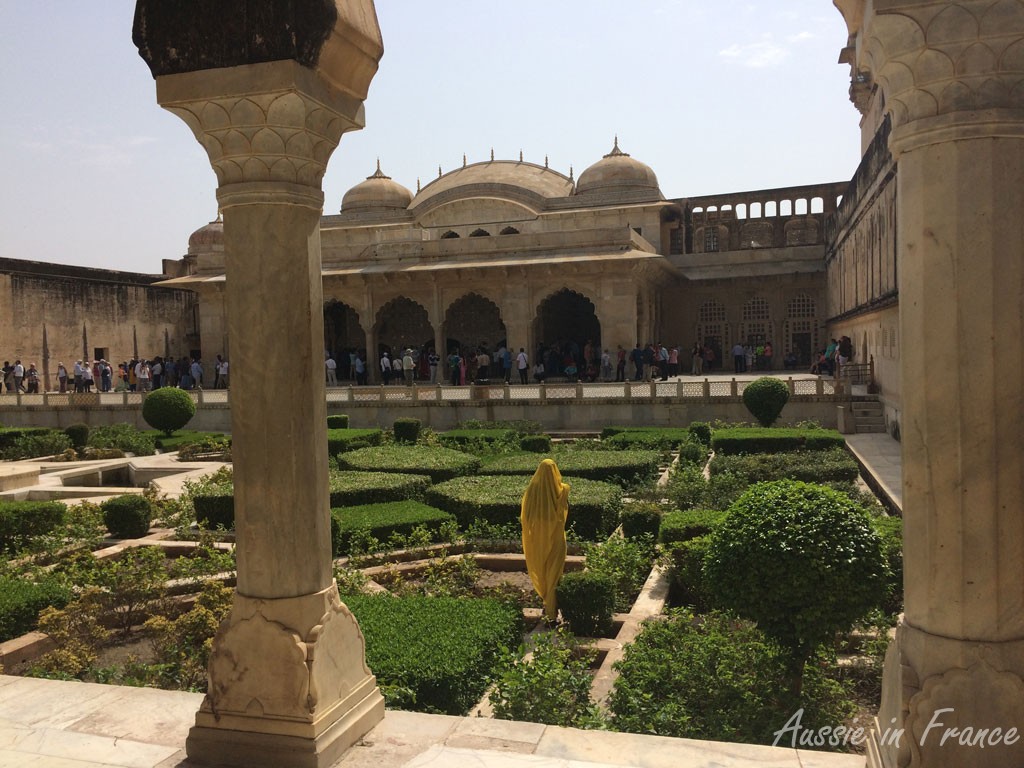 Inside planted couryard at Amber Fort

The palace is extensive with many different areas and fine details, the most beautiful of which is the Mirror Palace. 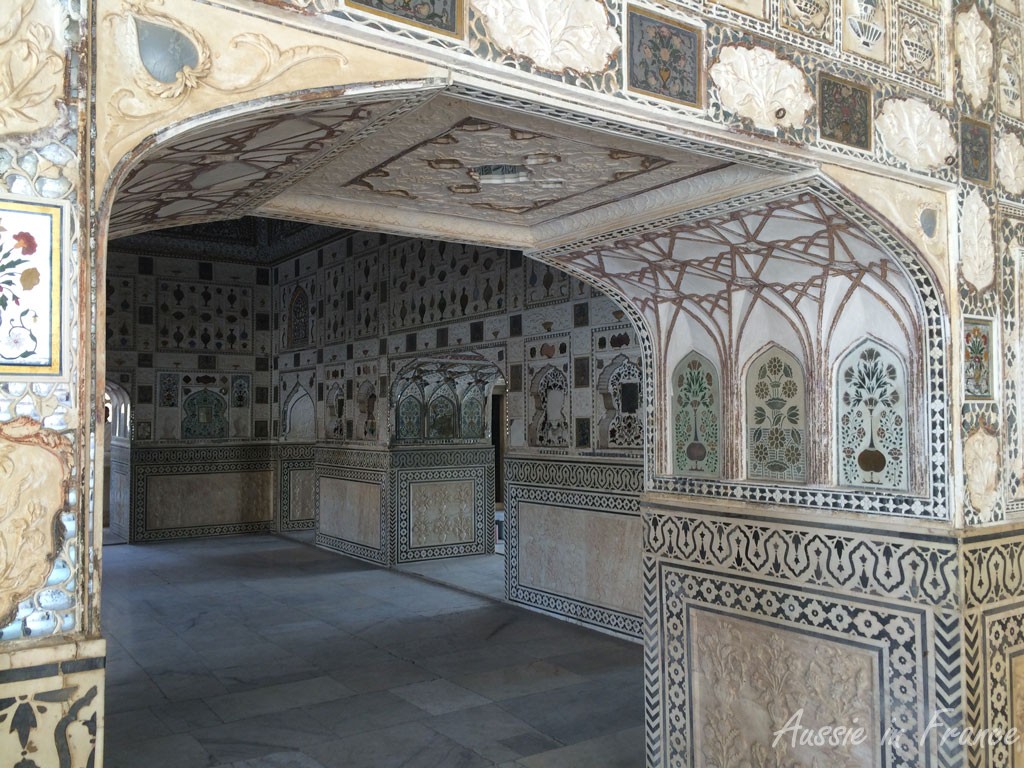 We learn more about Praveen. He has two grown-up children. His daughter is a French teacher and recently spent a year as an assistant English teacher in Rouen during which time her parents went to visit her for three weeks. His son has taken over his grandfather’s pottery business. 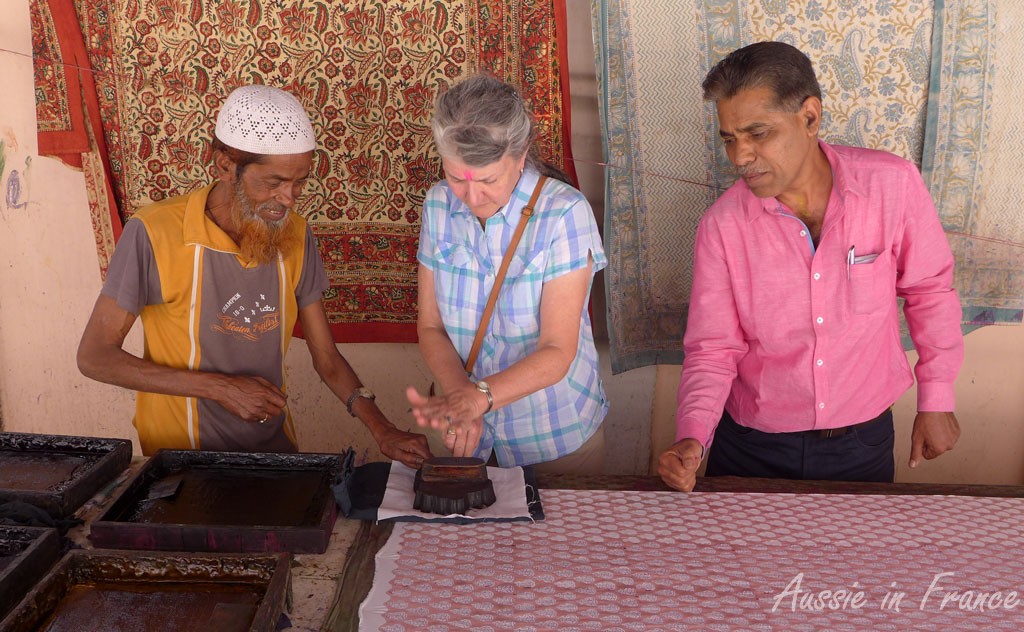 By now, the sun is at its zenith and amazingly hot. Praveen suggests we stop off at a fabric store to see the traditional printing process. He assures us that we don’t need to buy anything. After demonstrating the process during which I am asked to perform a couple of basic tasks, the vendor takes us down to the showroom. I nearly buy a tablecloth but unfortunately he doesn’t have the colour and pattern I want in the right size. Nearly all of patterns include elephants which I don’t really want. 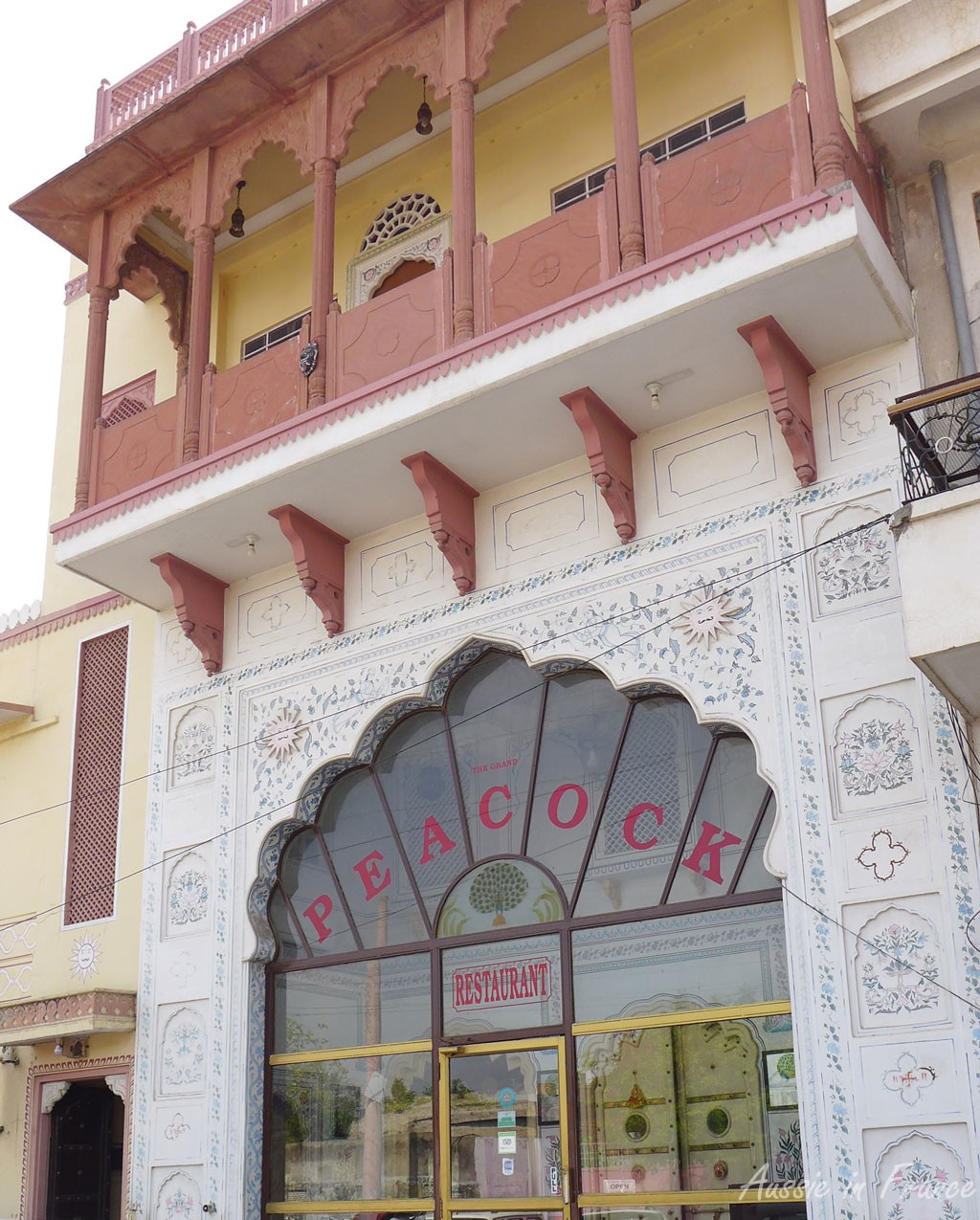 We then go to the Grand Peacock restaurant at Jorawar Singh Gate for lunch. We choose our usual dal, sweet and sour pumpkin, jeera rice, naan and plain curds. It’s the best meal we’ve had so far and only costs 1000 rupees (13 euro).

Some of the many astronomical instruments at Jantar Mantar

Our next stop is Jantar Mantar, a fascinating collection of nineteen architectural astronomical instruments built by the Rajput king, Sawai Jai Singh and completed in 1738. A UNESCO World Heritage site, it has the world’s largest stone sundial. 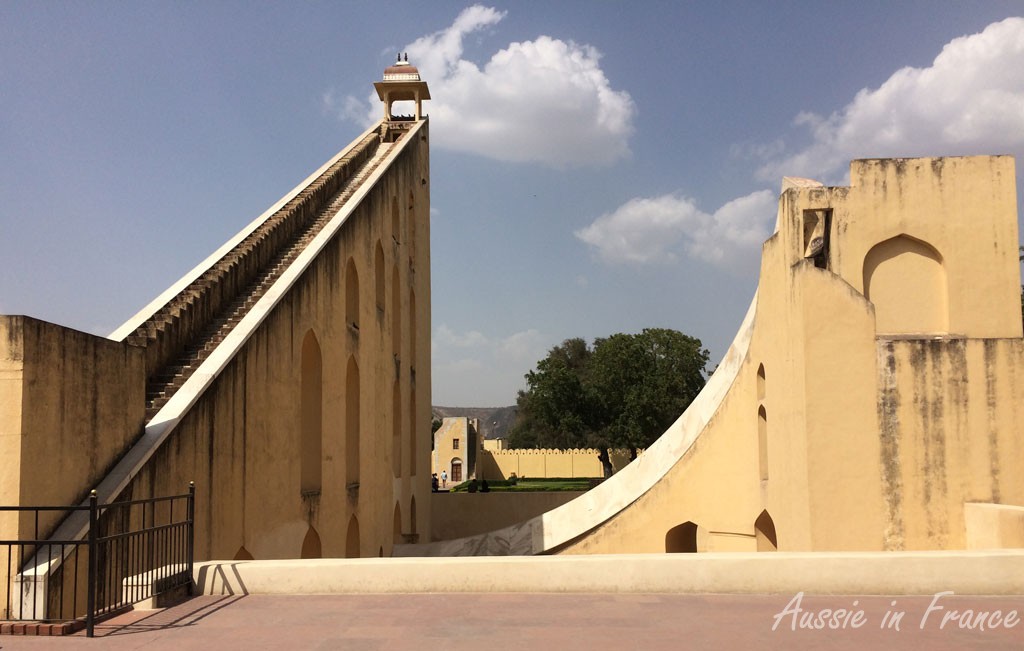 The largest sundial in the world at Jantar Mantar, Jaipur

Each time Praveen explains one of the instruments, he takes us into the shade because the temperature is well over 30°C. However, the full sun is perfect for observing the sundials and other masonry, stone and brass instruments built using the astronomy and instrument design principles of ancient Hindu Sanskrit texts. One of the sundials is accurate to within 2 seconds. 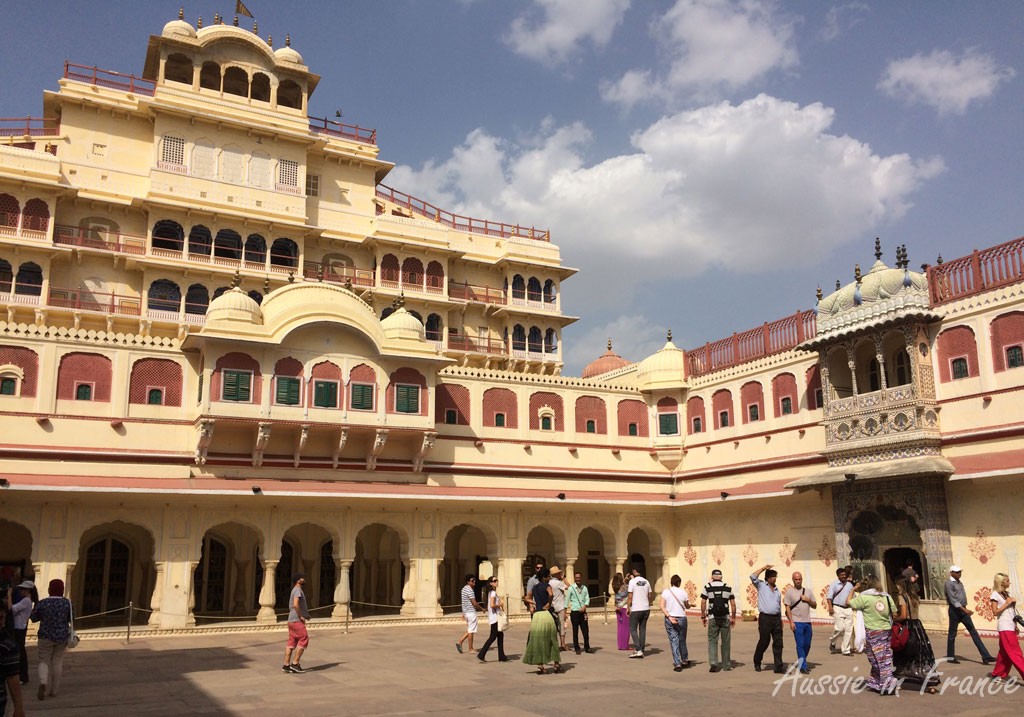 We move on to the City Palace next door, built between 1729 and 1732 by Sawai Jai Singh II, the ruler of Amber, who planned and built the outer walls. Later additions were made by subsequent rulers up until the 20th century. 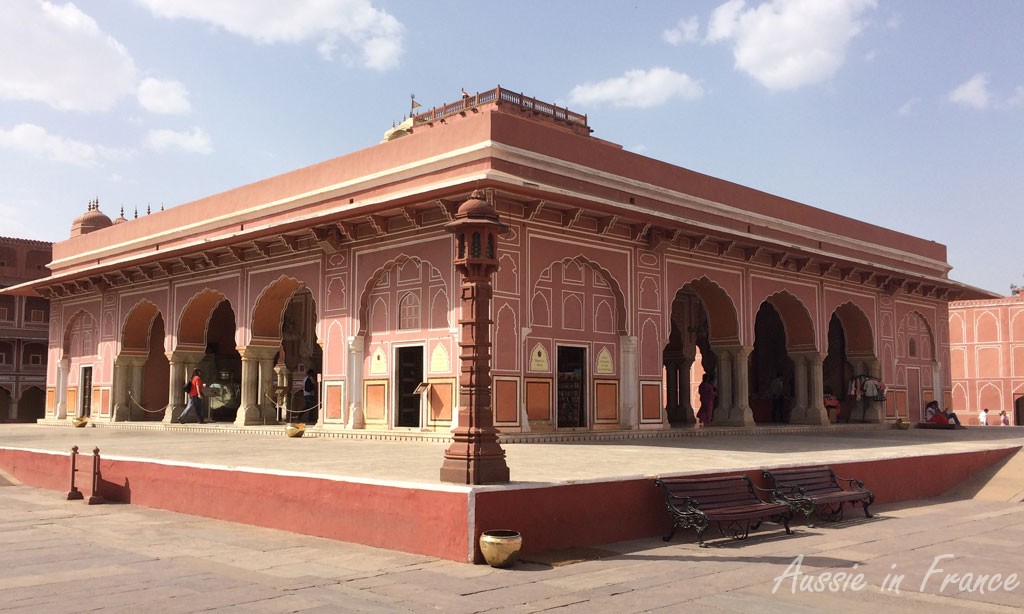 Public audience room at the City Palace in Jaipur

It includes the Chandra Mahal and Mubarek Mahal palaces in addition to a large number of courtyards, gardens and other buildings, and isthe seat of the Maharajah of Jaipur. Praveen explains that when the two flags are present on the Mubaret Mahal, which is still a royal residence, it means the Maharajah is present. 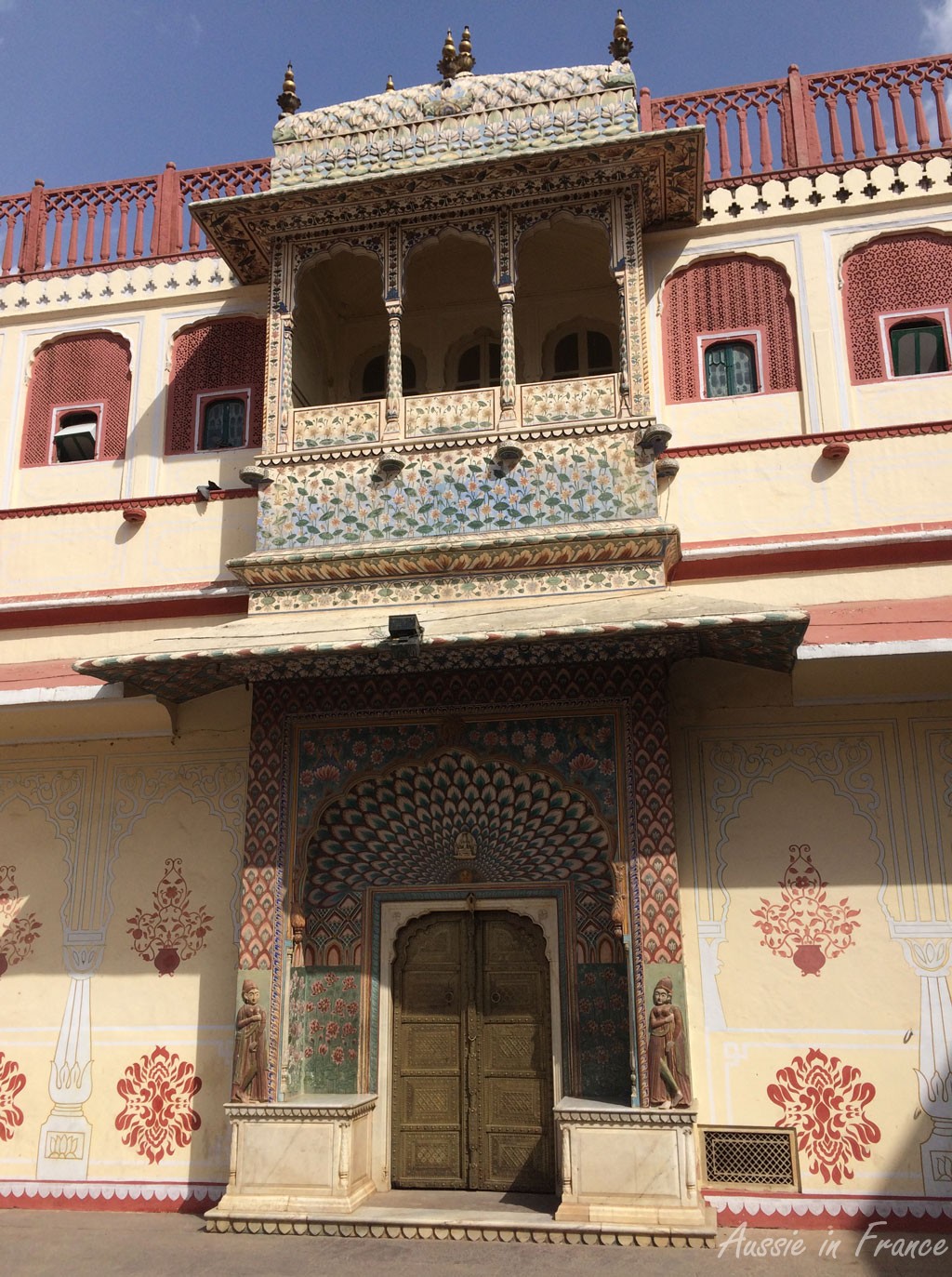 We visit the museum in the Chandra Mahal palace, which mainly includes clothing and weapons such as swords and guns. 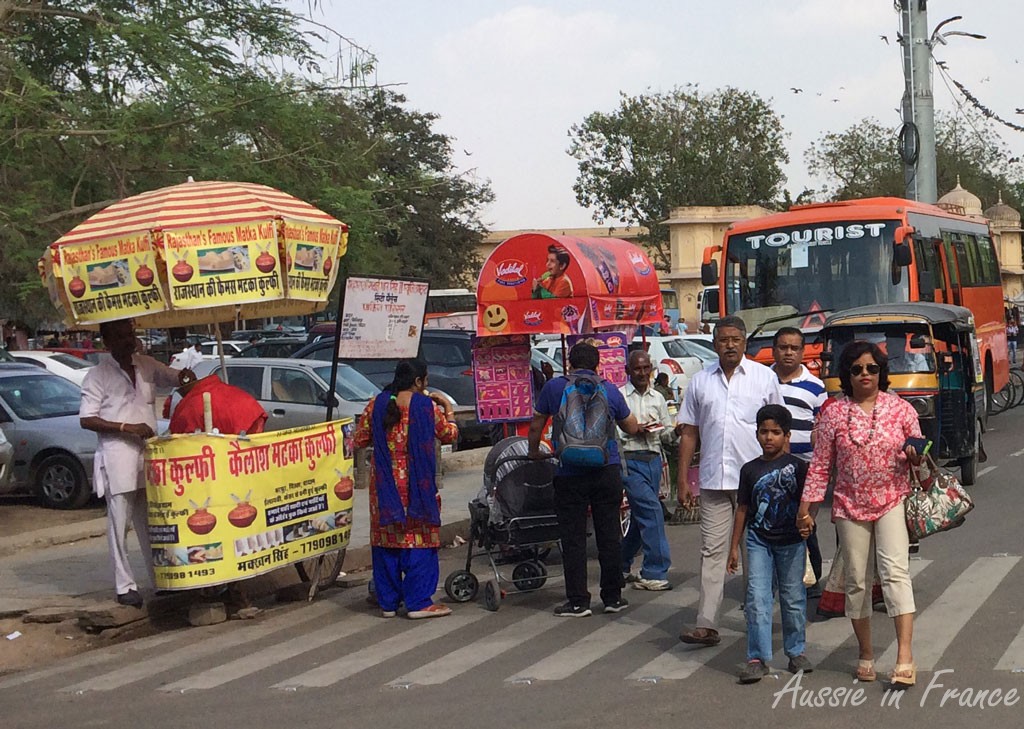 Typical street scene as we leave the City Palace

By now, we’ve reached saturation point and have no desire to go shopping in the bazaar, no doubt to Praveen’s relief, as he nods off in the car on the way back to our beautiful Shapura House Hotel. 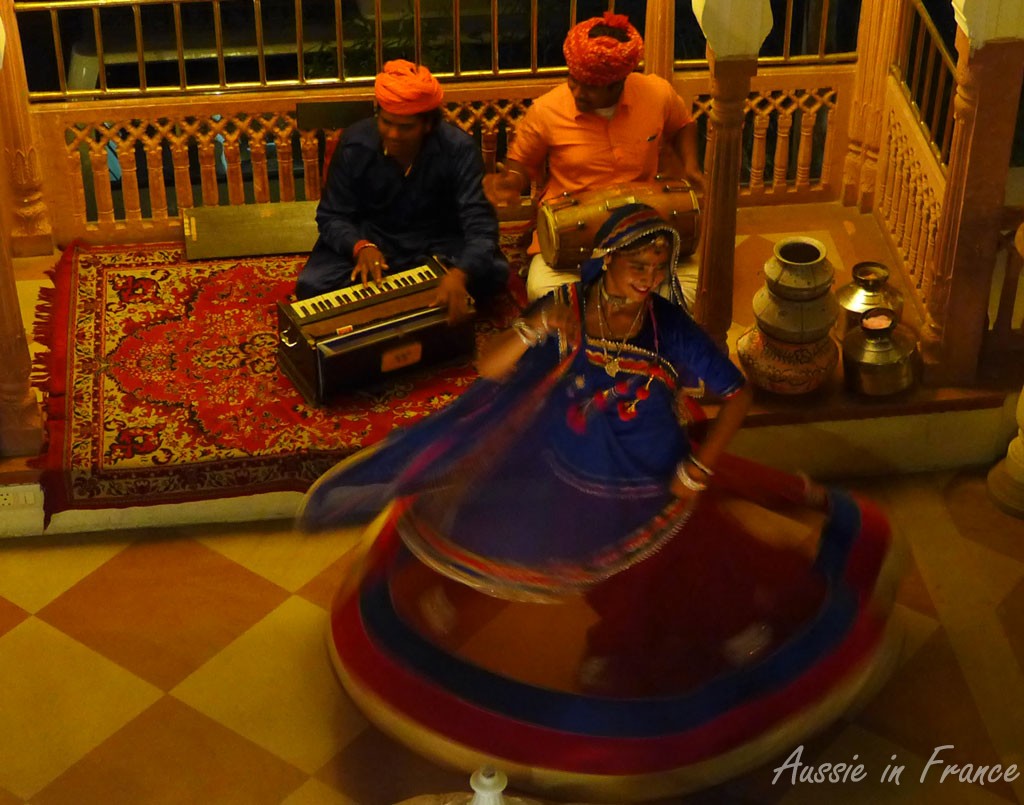 Musicians and dancer at Shahpura House Hotel seen from our terrace

We take a shower and have a welcome cup of tea and a couple of bananas that Rajendar has stopped off to buy for us. We then relax until the nightly live show in the restaurant below starts up again. This time we take a look from our balcony. There are two musicians and a dancer. The restaurant is mainly occupied by groups who are not necessarily staying in our hotel. Not exactly our scene so we have a gin and tonic next to the pool before retiring early as we have another early start tomorrow which includes a long drive to Agra and a visit to the Red Fort.