We left Dubrovnik for Zadar on a Sunday morning at the end of July and it was already very hot. Along the way there were countless vendors selling fruit and vegetables, often with makeshift showers to keep their watermelons cool! We stopped and bought figs, grapes, tomatoes, capsicums and olive oil. 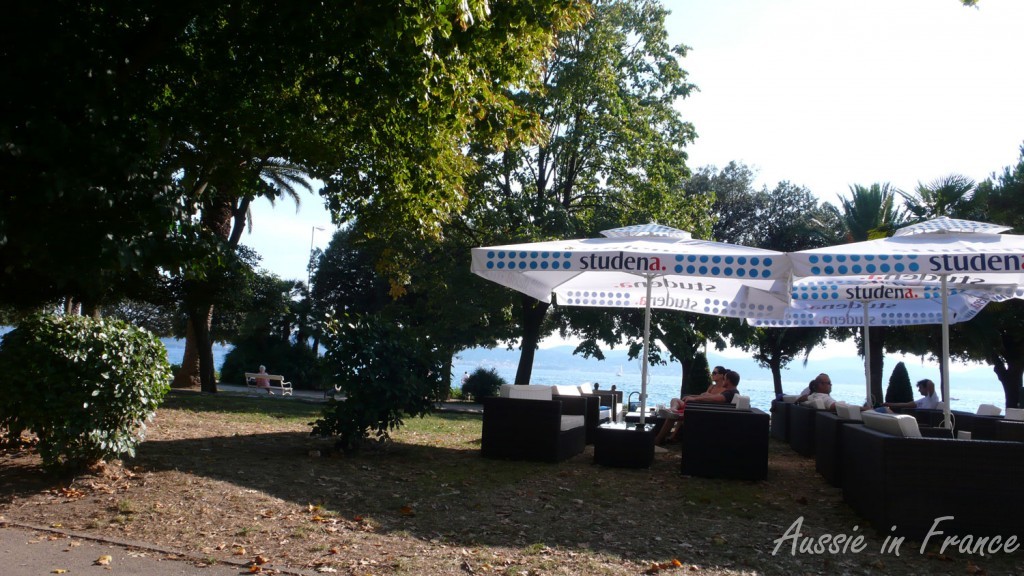 We ate our lunch at a covered picnic table in a very modern service station with a stunning view of the surrounding hills and reached Sibenik mid-afternoon.

Some of the sculpted heads on Saint James’ cathedral

None of the tourist frenzy here. The town is built directly on the edge of the water with boats moored next to the waterfront cafés which all have an excellent view of the islands opposite. We walked up the hill in the heat through a maze of little streets to Saint Michael’s castle then down again to Saint James’ Cathedral, Croatia’s most important example of Renaissance architecture with its lovely portal, beautifully carved baptistry and 71 sculpted heads. Black Cat later told me this was one of her favourite places in Croatia.

Our next port of call was Zadar where we had booked an apartment with easy parking and a terrace, just opposite Saint Donat’s. However, as luck would have it, when we arrived, the parking lot was entirely cordoned off for a major music festival that night! We waited in the car for the owner and envied the people in their arm chairs on the waterfront arrived but when she finally got there, she talked to the policeman and in the end we were able to park just in front of the building for the two nights we were there. The terrace turned out to be at the rear of the apartment looking out over everybody’s washing and cars! The inside however was very modern and spotless. It also had wifi. 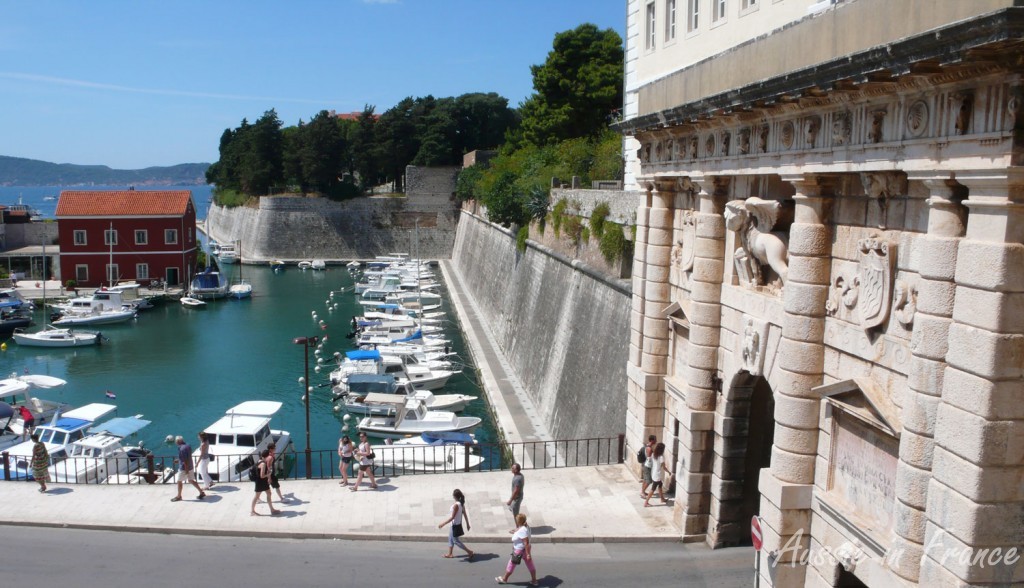 Land gate and lions in Zadar

We had dinner in a restaurant called Bruschetta near the water front recommended by the owner which was very pleasant. We had intended to go cycling on the islands opposite, Pasman and Ugljan, but the return of my turista meant that I spent most of the next day inside while Jean Michel checked out the sites and did some food shopping. In the evening, we visited the beautiful 9th century Saint Donat Byzantine church, the “land gate” with its lion and five wells. Apparently I’d missed the tourists and found it very pleasant and family-oriented. 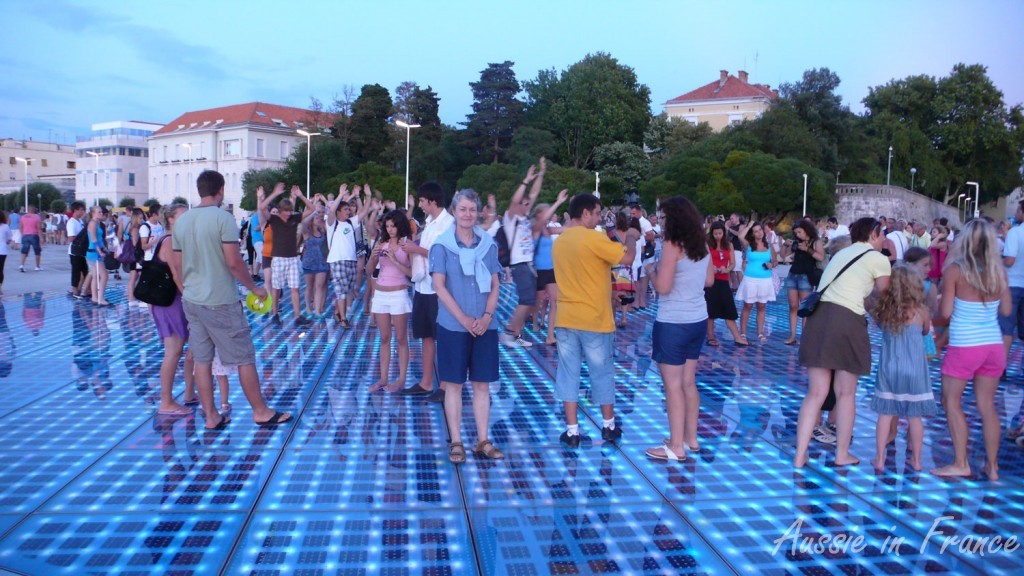 After an aperitif, we joined the local population of Zadar to watch the sun set over the Sea Organ and check out an intriguing attraction by the same architect just next to it called The Greeting to the Sun, consisting of multi-layered glass plates and silicon cells and forming a marine compass which changes colours as the light waxes and wanes. It’s actually a small power plant that is also used to light up the entire waterfront. 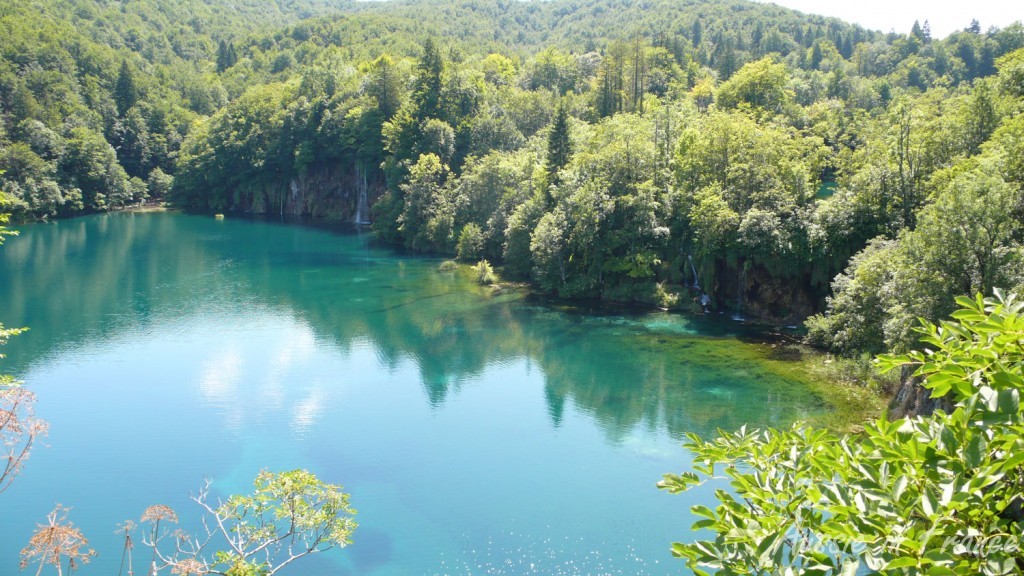 The next day, we headed for Plitvice Falls, one of the highlights of our trip, which I have described in two previous posts (Sunday’s Travel Photos and Cycling in Croatia). We stayed in a lovely and very reasonably priced apartment up in the hills (it even had a barbecue!) with a very convenient access to the lower lakes which enabled us to avoid the crowded car parks and hordes of tourists. I didn’t visit the higher lakes because of my turista, but Jean Michel took the boat and bus next day and joined the crowds of visitors. Having seen both, he said that he definitely preferred the lower lakes so we visited them again before we left the next day for Porec.

This entry was posted in Croatia and tagged Apartmani Lipa, Plitvice Lakes, The Greeting of the Sun, the Sea Organ, Zadar. Bookmark the permalink.