My Croatian Itinerary – Part 6: Porec and Pula in Istria 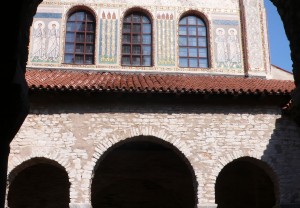 The previous leg of our Croatian itinerary (Part 5) ended at Plitvice lakes which were truly the highlight of our trip. The next stage of our journey took us to Porec in the very Italian peninsula of Istria. We arrived at Hotel Filipini, 7 or 8 K from Porec, around 3.30 pm. First problem – they didn’t have our reservation, despite the fact that it had been confirmed. They also only spoke Croatian and Italian! They eventually found us a room downstairs on the other side of the kitchen that turned out to be opposite a room full of noisy children. The bed was awful and I was bitten by mosquitoes. 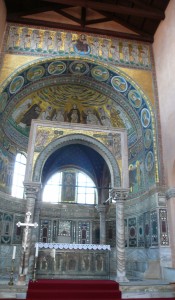 We had hoped to cycle from the hotel to Porec but it was very hot and the cycle path proved to be of no interest whatsoever so we ended up driving there. We found free parking not far from the centre, just next to the post office and went off to visit the Euphrasian Episcopal Complex, a world heritage site and the town’s most important attraction. In addition to the architectural interest of the mainly Byzantine basilica, baptistry, palace and chapel, there is a 16th century bell-tower that affords a panoramic view of the old town. We strolled through the streets which, despite the tourists, seemed very typical with several well-preserved mediaeval houses of obviously Venetian influence. 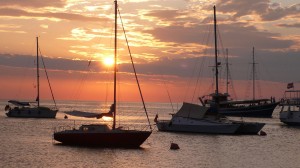 We decided to go to the little village of Novrigrad for dinner. There was some sort of festivity going on which seemed to include food, drink and handicrafts but we had no idea what it really involved. We later saw they were selling mussels and other seafood that you ate standing up. In the meantime, we found a restaurant by the seafront appropriately called “Café del Mar” and had an enjoyable meal watching the sun set over the little harbour. Lots of shops were open so we purchased swimming shoes for next day because we had already seen that there is no sand on the beaches, just sharp rocks. 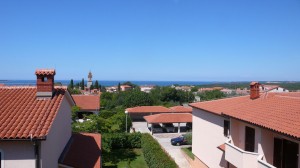 Despite the excellent breakfast, we left the hotel next day because of the bed, noise and mosquitoes. Their Visa card machine was “broken” so we had to drive into Porec to get cash. We then left for Pula. After a half an hour, I realised the hotel hadn’t returned our IDs, so back we went! We arrived in Fanzana at about 11.30 and immediately found a hotel more to our liking, the Villa Letan, in Peroj. It was a bit more expensive, but had a good bed, a balcony with a great view and air conditioning. I was even able to have my clothes ironed at a very reasonable price!

After lunch at a very friendly portside restaurant in Fanzana called the Batana and some well-deserved R&R at the hotel, we went swimming in the Adriatic for the first time. Thanks to our swimming shoes, we finally managed to get out far enough to enjoy ourselves before staggering back over the rocks. 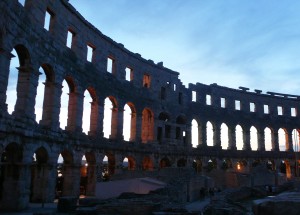 We arrived in Pula at about 8 pm and were delighted to find the famous amphitheatre still open. It was wonderful to visit in the setting sun with hardly a soul in sight. I’m told it is packed during the daytime. They were preparing for some sort of show and it was easy to imagine the Romans occupying the 23,000 seats and milling in and out of the stores and shops beneath its 72 arches.  The old town was very animated and after strolling past the Temple of Augustus, the Town Hall built in 1296 and various gothic and renaissance buildings, we found a very friendly outdoor restaurant called Angulus on Hermana Dalmatina. 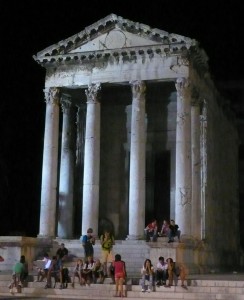 Breakfast next morning was nothing special but at least we’d had a good night’s sleep.  We had initially planned to visit some of the nearby islands, but they are very protected and you can’t take your own bikes so we decided to work out our own cycling itinerary around the tip of the peninsula west of Pula. It proved to be an excellent choice that I have already described in a previous post. Next day, we headed for Slovenia.

3 Responses to My Croatian Itinerary – Part 6: Porec and Pula in Istria