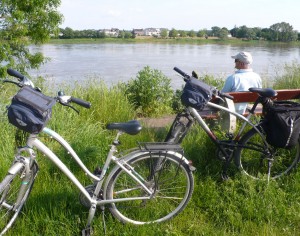 Loire by Bike is part of the EuroVelo bike route from the Atlantic to the Black Sea. We’ve already covered quite a bit of the Loire route as well as a small portion in Germany, in the Rhine Valley, between Basel and Lake Constance, on our way back from Croatia last year. In another post, I talked about cycling around Angers and crossing the river on barge, which I thought was rather exciting! 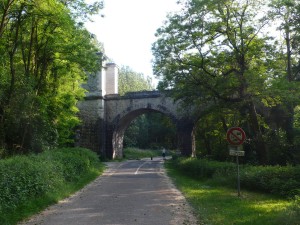 Yesterday, we did a portion closer to home, setting out from Closerie Falaiseau and going as far as Menars, a 30 K round trip altogether. The first 7 kilometres are not too wonderful, as you have to take the main road that runs along the Loire Valley, with the first 3 K at 70 kph. After that, the speed limit drops to 50 kph but it probably takes the cars another couple of kilometres to  really drop speed. After that, you can take the “mail” as they call the esplanade used as a parking lot on the waterfront in Blois and Amboise. 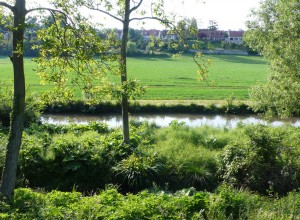 Next, you have another couple of kilometres along a “shared bike/car route” with very little traffic, flanked by houses with climbing roses on one side and a grass verge on the other. Then once you reach the riding school, motorised traffic is prohibited and you cycle along a bitumen road mainly through a lovely shady forest. Next time, we’ll put the bikes on our Thule bike carrier on the back of the car and start at the end of the “mail”. 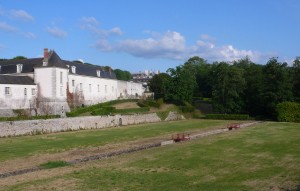 At one stage, we cycled under a lovely old stone railway bridge no longer in use (it’s cut off completely at one end) and many clusters of water irises in the little stream on the left of the cycle path. The path wasn’t over busy, but we still passed other cyclists, often with children and lots of joggers and strollers. There are also benches along the way to rest. 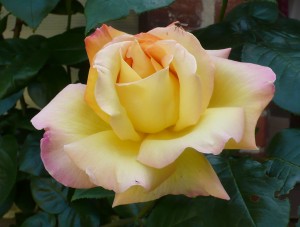 When we got to Menars, we rode into the village, which has a very large castle built in the 17th and 18th century with very dry looking grounds. Unfortunately, since it was Monday and a public holiday to boot, there were no bars open so we had to make do with our usual water and biscuits then ride all the way back to Blois for an apéritif at Le Penalty. After that, we rode home, stopping on the way at L’Embarcadère to reserve a riverside table.

When we got back, our first yellow rose was out!