Our Anniversary Dinner in the Loire

This is not our wedding anniversary, which is in June, but the anniversary of the day we met which we consider far more significant. We used to go back to our first restaurant called Les Deux Chevrons in the 15th in Paris – it had really wonderful pan-fried foie gras – but one day it had the temerity to close so we decided we go to a different place each year. Now that the years have gone by (15!), we have clocked up quite a few different restaurants. I’m embarrassed to admit that I don’t remember where we went last year. 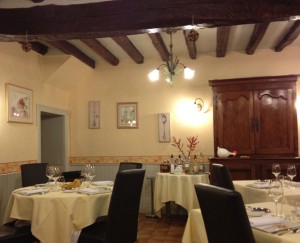 Relationnel was supposed to be arriving in Blois on 7th December but when I realised the 6th was our anniversary, he rescheduled a couple of meetings and came on the 6th (minus his suit, shirt and cuff links for the Loire Connexion Christmas party, but with two hats). I had tracked down and booked a restaurant recommended by a friend: Le Lion d’Or Val de Loire.

It was a country inn, in the little town of Candé sur Beuvron which we knew from cycling this summer, with lots of oak beams and panelling. Only three tables were occupied but it was a weekday in winter, out in the sticks, so it wasn’t surprising. I wonder sometimes how these places manage to keep afloat but it has a terrace and is obviously very popular in the warmer months. 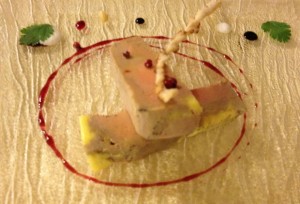 We started with pétillant de Touraine (Susan, are you listening?) because we’ve discovered that the champagne here is horrifically expensive. It was served with a verrine of fromage blanc and spices with granny smith apple on top, little savoury cummin croissants and nut & olive cakes, followed by  a beetroot emulsion with spices and prawns. 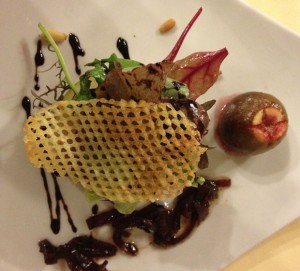 We chose the fixed menu at 42 euro. For starters, Relationnel had lobster ravioli with three types of cabbage and a crustacean and coriander emulsion while I had foie gras, served with mixed leafy greens and candied figs (delicious). 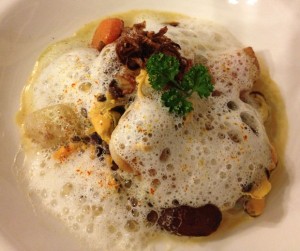 As a main course, Relationnel chose the braised ris de veau, “forgotten” (as in dug up from the past) vegetables and cream sauce. I had baked monkfish on a saffron mussel nage with mashed Vitelot potatoes with herbs and lemon zests. Unfortunately the fish was either overcooked or deep frozen, which made it very tough and rubbery. 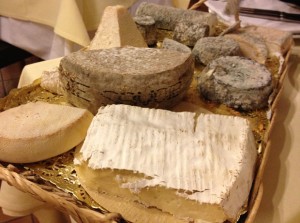 We then had an excellent cheese platter (even though we certainly didn’t need it!) followed by a “mango-chocolate-praliné” dessert with passionfruit coulis for Relationnel and “French toast” made with pain d’épices, poached pear in spices, caramel and brown sugar biscuit (spéculos) ice-cream for me. The pain d’épices wasn’t brilliant either. 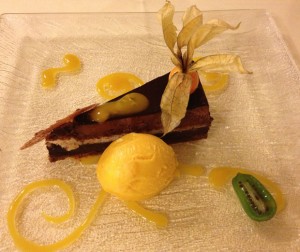 Coffee was served with a chestnut cream and fromage blanc verrine with fruit jelly squares and little biscuits. We had a lovely evening even though the food (and service) were uneven. Perhaps it would be better to go during the weekend or in peak season when there is a greater turnover. It was much better than “Le Rendez Vous du Pêcheur” in any case! 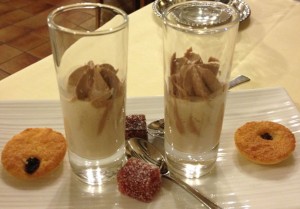 5 Responses to Our Anniversary Dinner in the Loire