Cycling to the Rendez-vous du Chocolat at Château de Villesavin

We can’t believe that it’s mid-October and the temperature is going to be 25°C in the afternoon! Absolutely unheard-of. We can’t wait to get out on our bikes. It’s also the 9th Rendez-vous du Chocolat at Château de Villesavin so we choose Itinerary n° 5 on the Châteaux à Vélo route called “Shadow and Light” and drive the 20 minutes to Cour Cheverny, about halfway along the 30 kilometre loop. 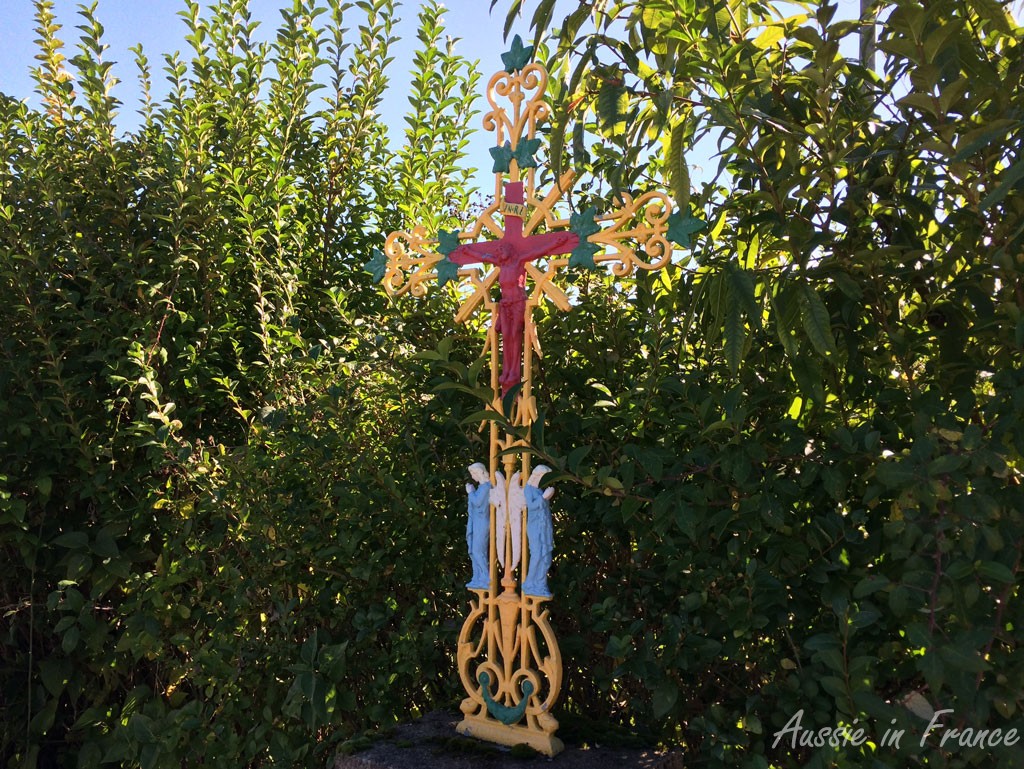 We cycle through typical Sologne countryside, mainly fields and ponds, and come across several several roadside crosses. I’ve never seen one as colourful as this before! 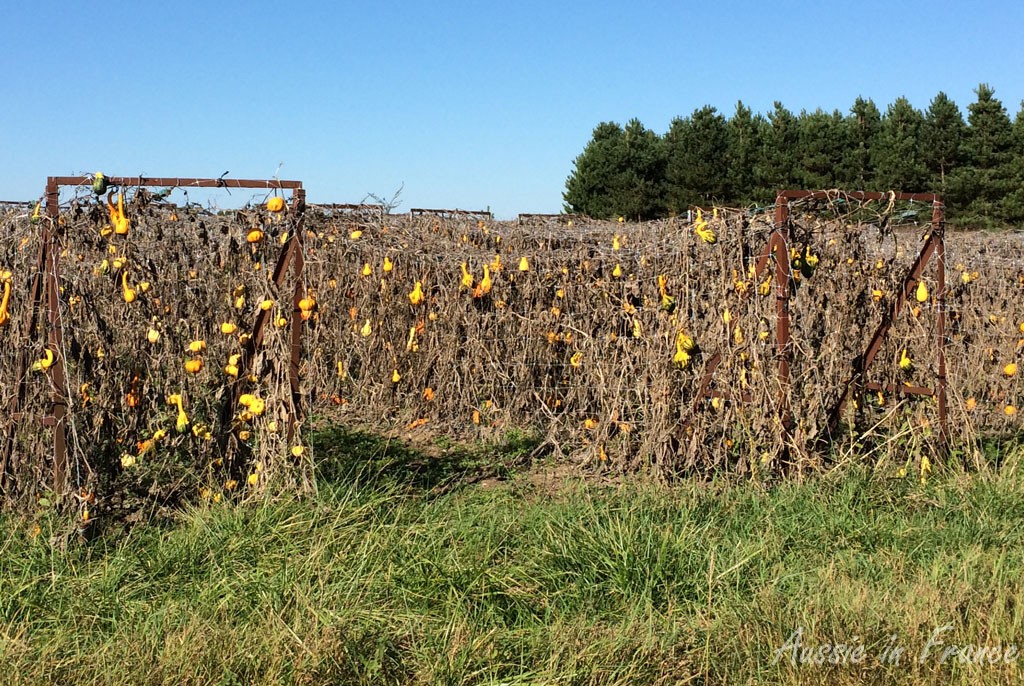 Further along, we see an unusual crop of small squashes which are very popular at Halloween and make great indoor decorations. 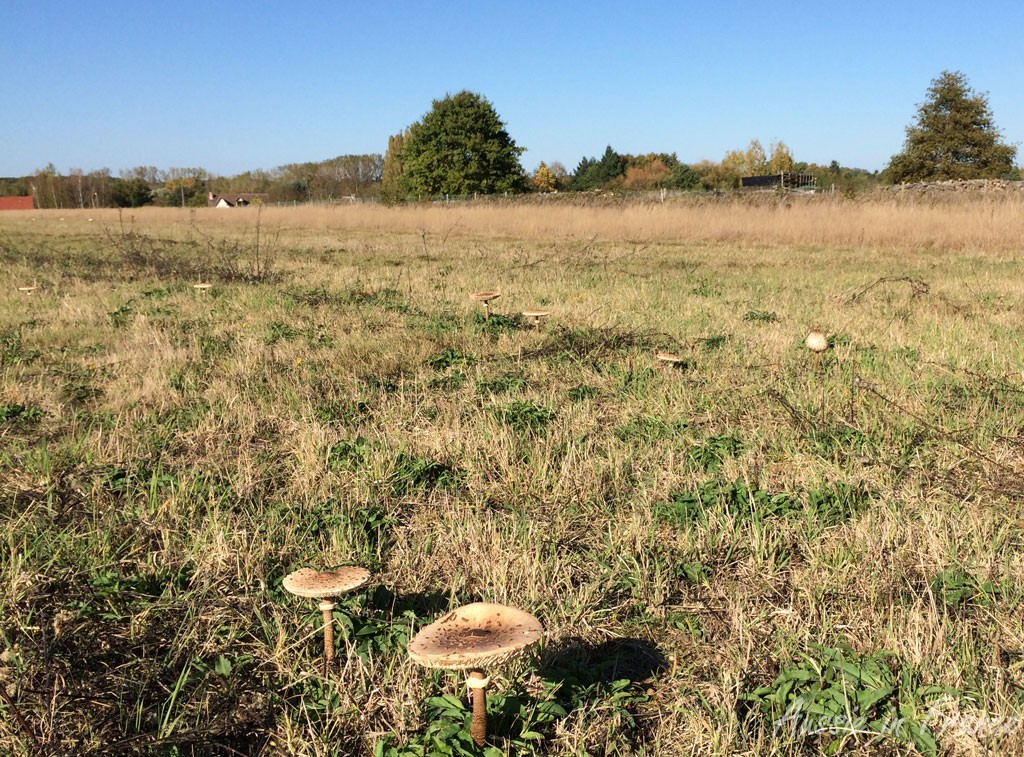 A field of parasol mushrooms

Suddenly Jean Michel calls out “champignons!” and we stop next to a field with the stubs of a cereal crop after harvesting. It’s full of umbrella mushrooms which is a nice surprise because we haven’t found any mushrooms for ages due to the lack of rain in September. As there is no fence, we pick all the half-open mushrooms we can see. 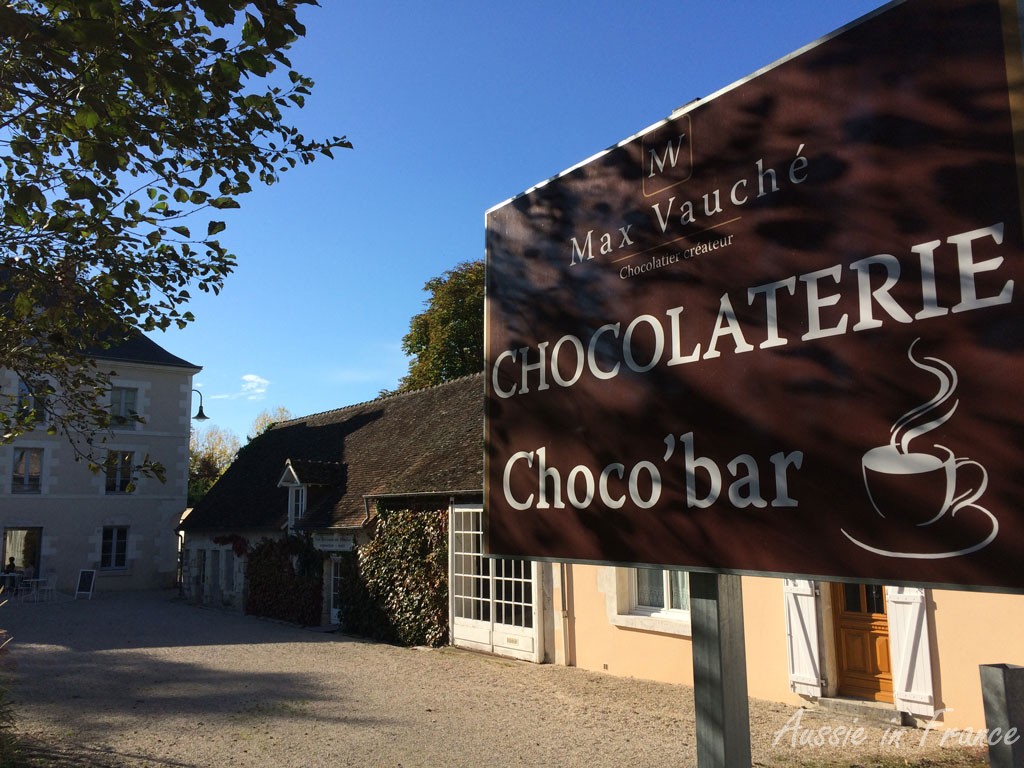 In Bracieux, with its beautiful halles, where we once attracted the comment “at your age and in love“, we ride past Max Vaucher’s chocolate factory, but it is not our destination today. We’ll go back on a cold winter’s day! 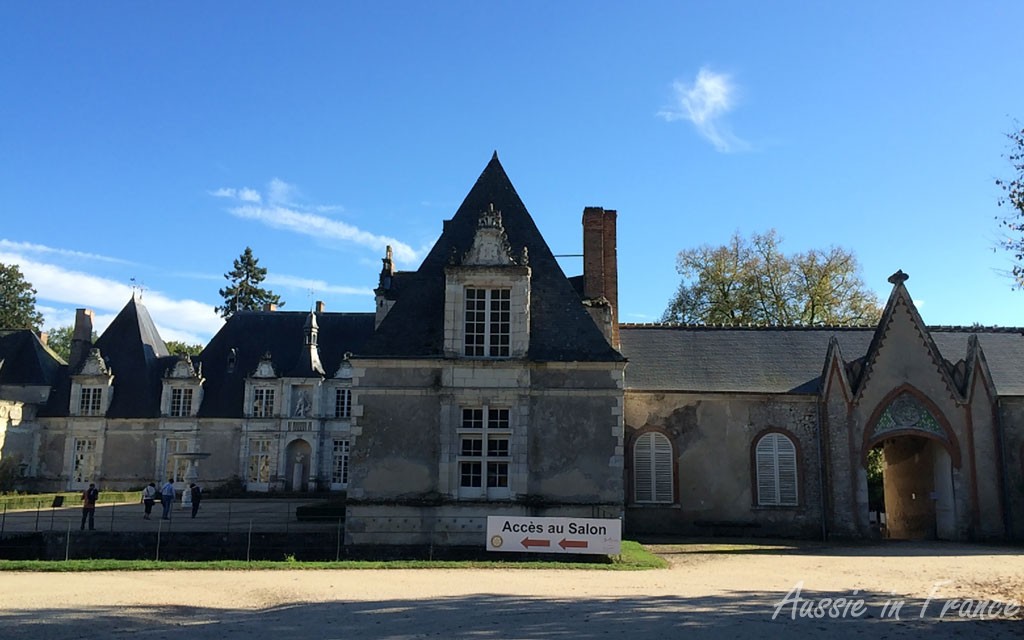 A couple of kilometers further on, we arrive at Château de Villesavin and are told that cyclists can ride ride right up to the entrance. Now that’s one of the things I really like about arriving somewhere on a bike! After securing our bikes we continue on foot to the entrance of the Rendez-vous. We pay 4 euros each and are given some documentation. 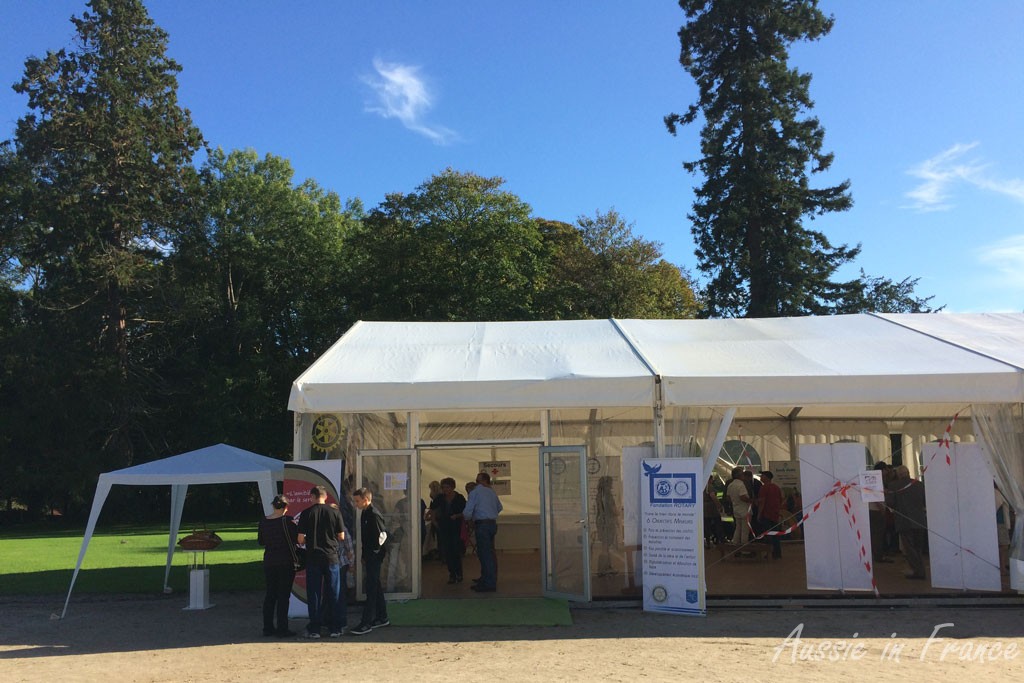 I’m not sure exactly what I was expecting (maybe those chocolate dresses they have in Paris that Mary Kay told us all about in Out and About in Paris?) but it is really like any other food fair except that everyone is selling chocolate. 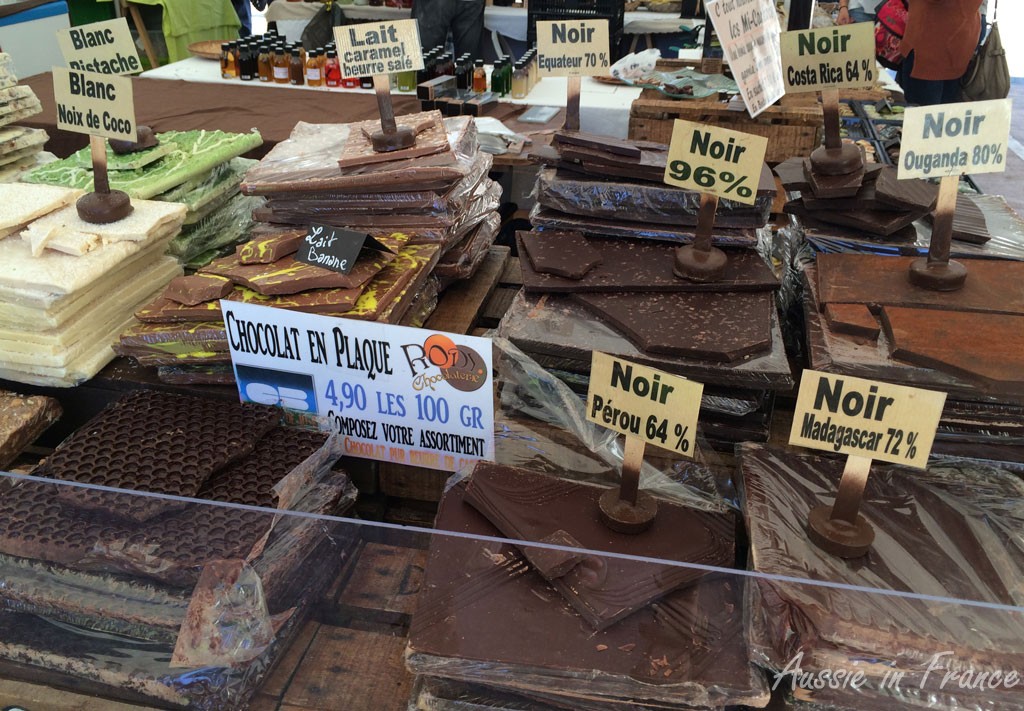 We taste our way around the large tent and are particularly interested to see what chocolat sans sucre and 96% chocolate are like. The chocolate without sugar tastes like any other chocolate. The young man explains that the sugar is replaced with malitol and it’s designed for diabetics. We don’t buy any.

The 96% chocolate is less bitter than I imagined but not particualrly tasty. We don’t buy that either although I’ve read that it’s an excellent appetite suppressant. 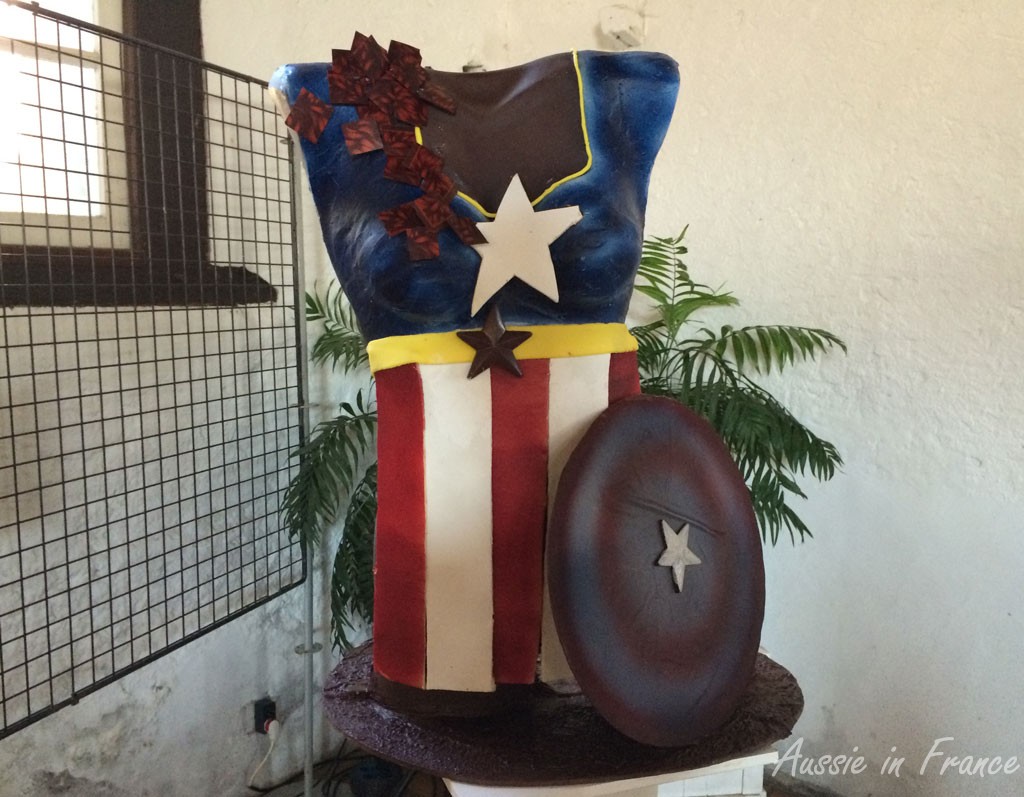 In the château itself, there are several demonstrations going on and we see a malleable sort of chocolate that can be flattened with a rolling pin and several torso sculptures. 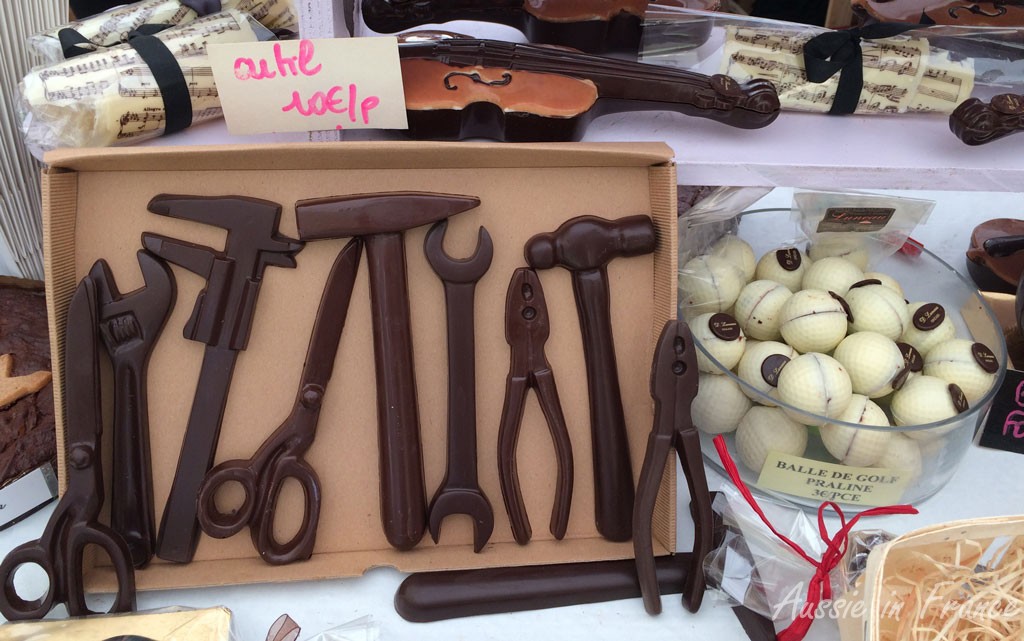 At one stage, I look around and who do I see? The lady who used to live in our “house of happiness” as a child! Running into someone we know at a local event gives us a sense of belonging in our new home in the Loire. 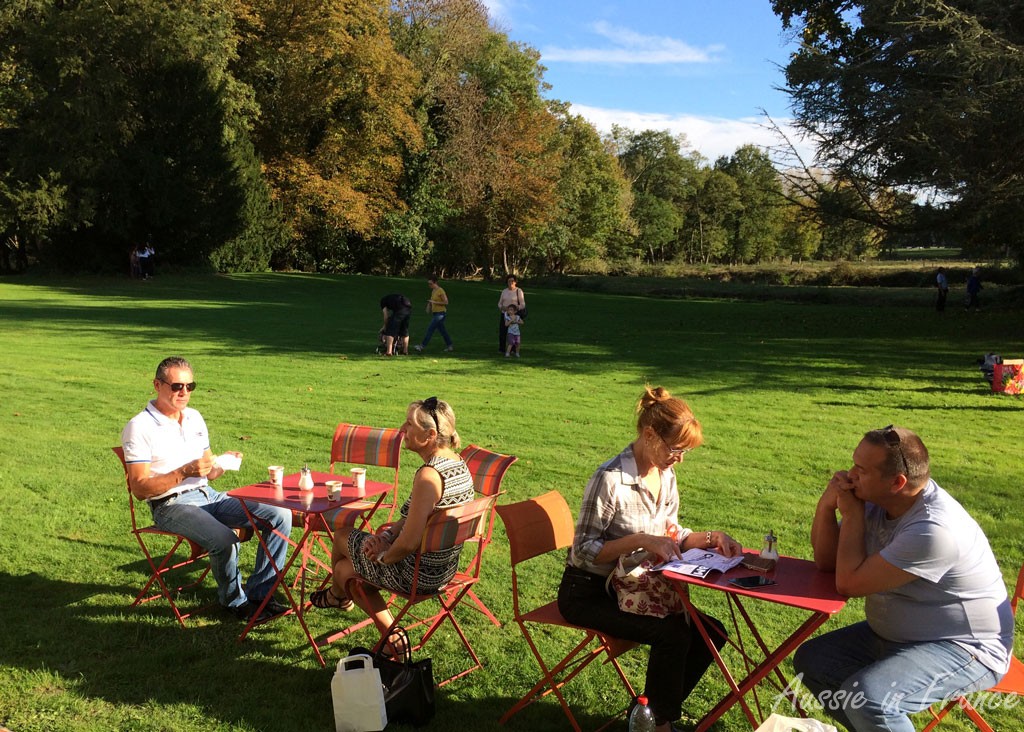 Tea time in the sun!

We go to the afternoon tea tent and get a glass of rosé each and a slice of cake. Jean Michel chooses chocolate while I prefer the apple, which is a much better choice! We find a seat looking out over the lovely grounds of the château. 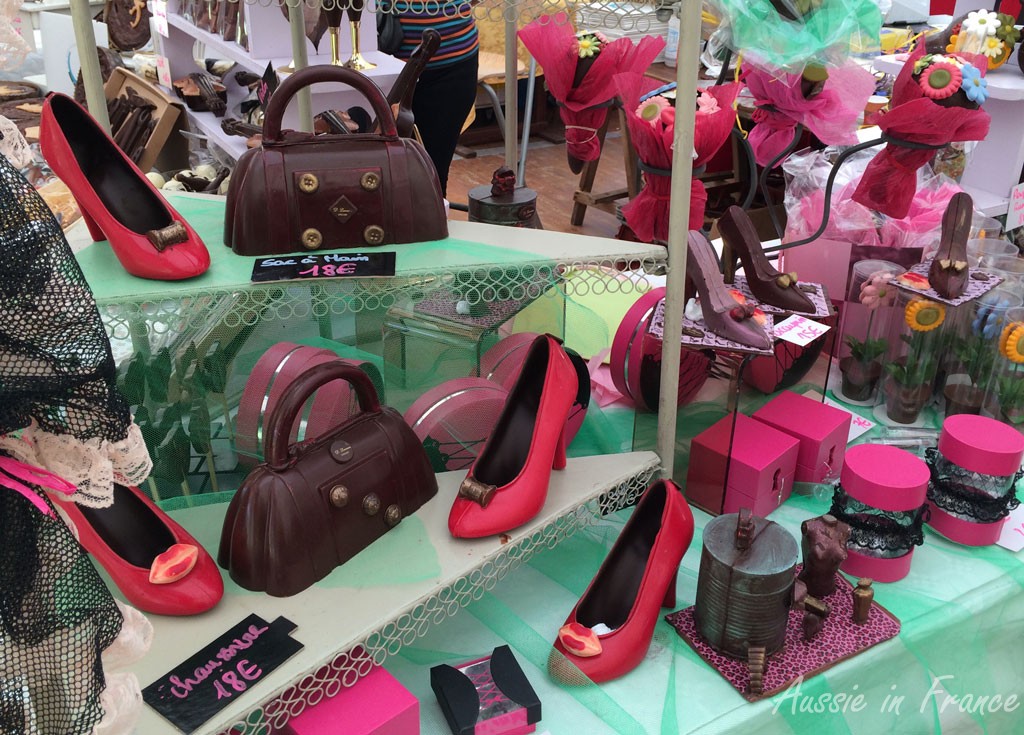 We then do the rounds again and find some blocks of chocolate to accompany our coffee. I love the chocolate shoes and bags but we don’t buy any of those either! 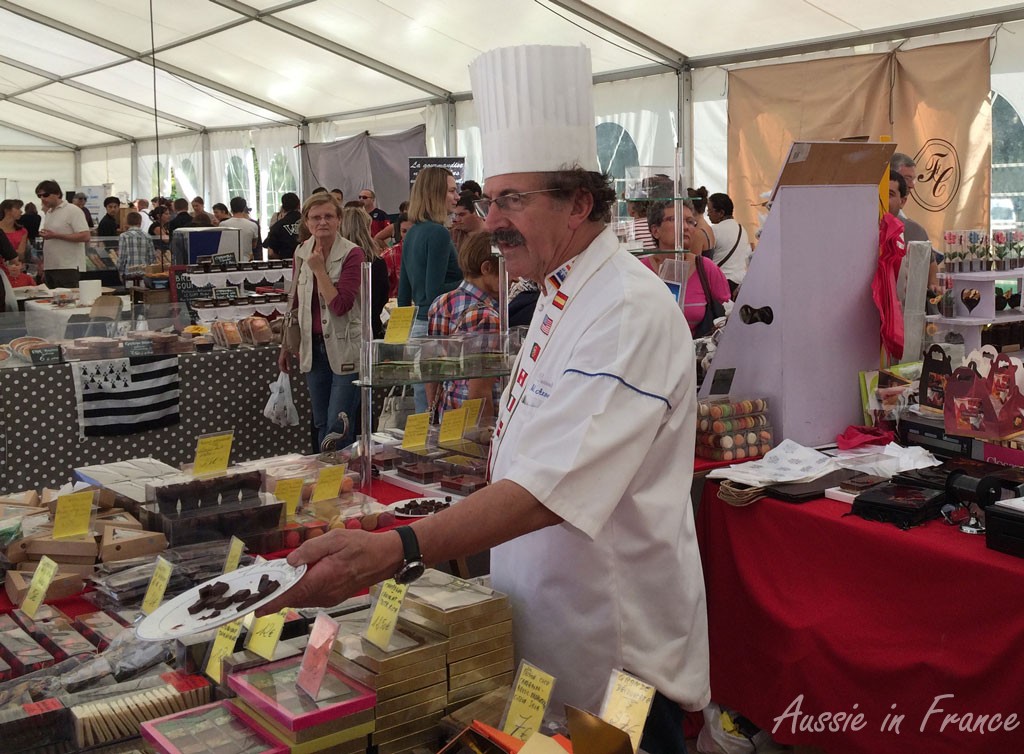 There is even a world chocolate-making champion among us but his products are very sophisticated and I only like plain dark chocolate … I’m almost tempted by the chocolate shirts and glasses on another stand though. 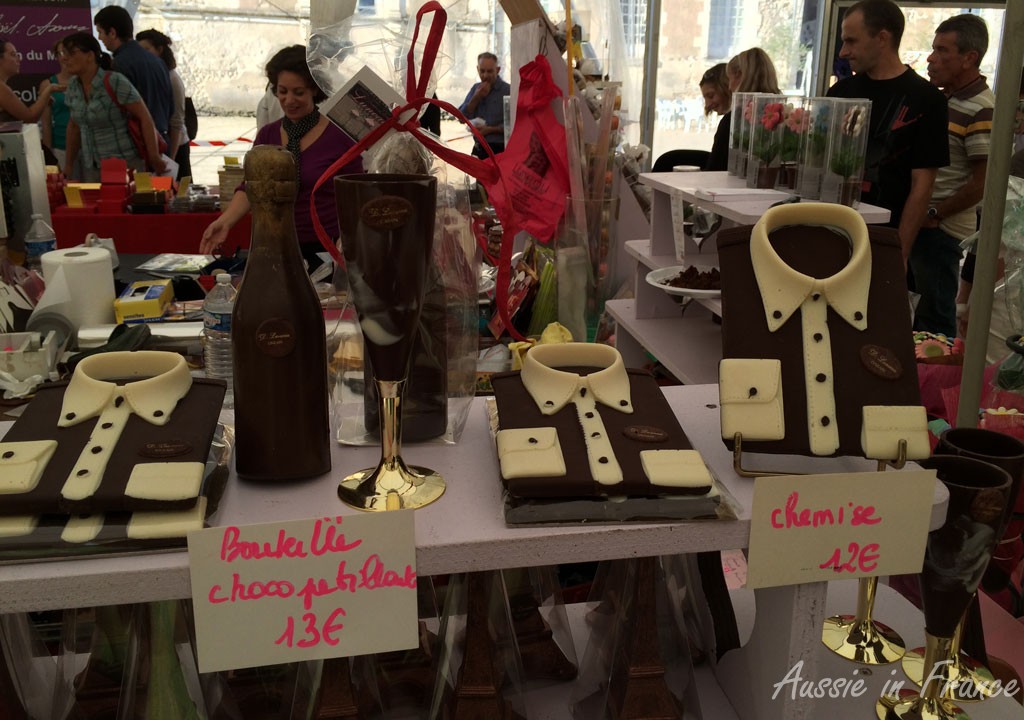 We get back on our bikes and cycle the 15 km back to the car. At Cour Cheverny, we find a butcher and buy a côte de bœuf for the barbecue to accompany our mushrooms. Surely in mid-October, it must be the last of the season!