We’ve talked it over and decided that, based on the experience of the practice window, the kitchen windows may take a lot longer than expected and we may well have to forego our summer cycling holiday this year. I was hoping to go to Romania but we would need at least a month to cross half of Europe by car so the plan is now to go for short trips closer to home instead whenever my workload permits. Otherwise Jean Michel is going to be stressed out of his mind trying to get everything finished. 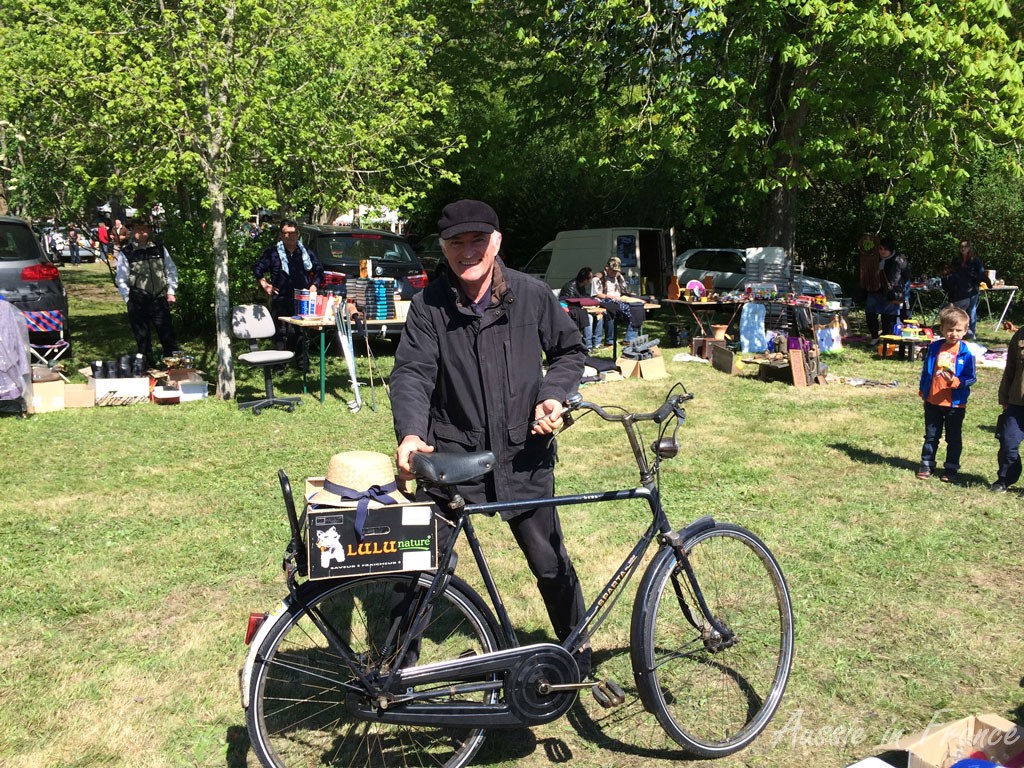 The practice window is now in place. The laundry still isn’t finished – it’s missing the sink – but I have no urgent work waiting for me and the weather forecast is looking good. After participating in the local garage sale on Sunday which was held in the grounds of the old school, we pour ourselves a gin tonic (our holiday beverage) and debate on where to go. I’ve been wanting to go back to Gien for a while to complete our porcelain breakfast service, especially since I broke one of the two egg cups. 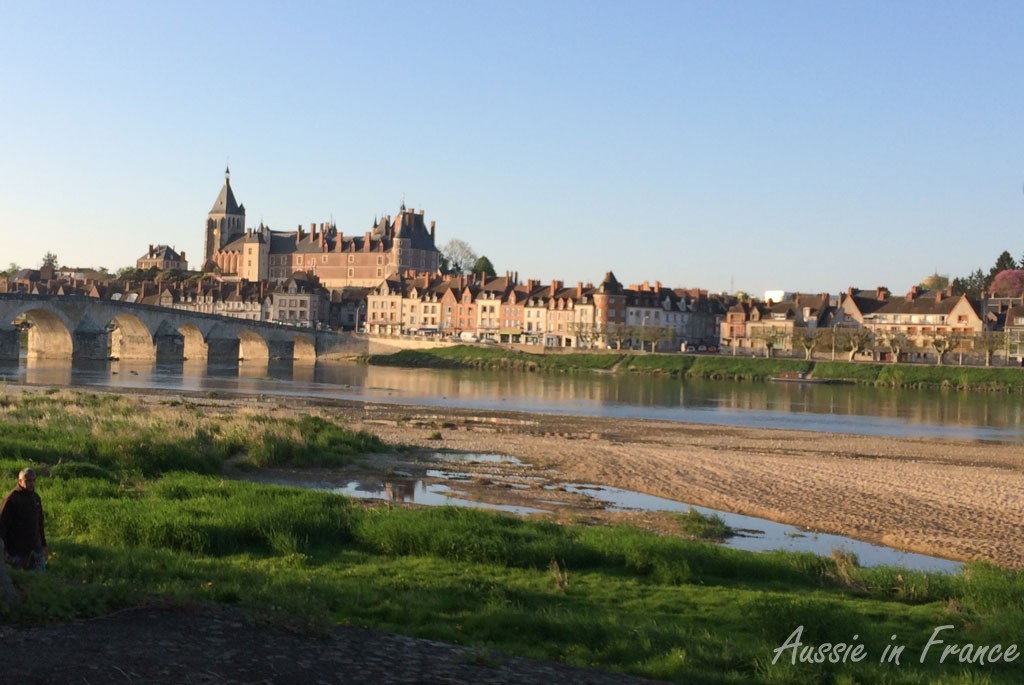 Gien at dusk taken in a moving car!

Gien is a two and a half  hour drive east from Blois along the Loire and is part of the Loire à Vélo and Eurovélo 6 cycle routes (the one that goes from Saint Nazaire on the eastern Atlantic seabord to the Black Sea). We find and book a B&B about 10 km out of Gien for the next evening – it seems to have plenty of positive comments on Trip Advisor. 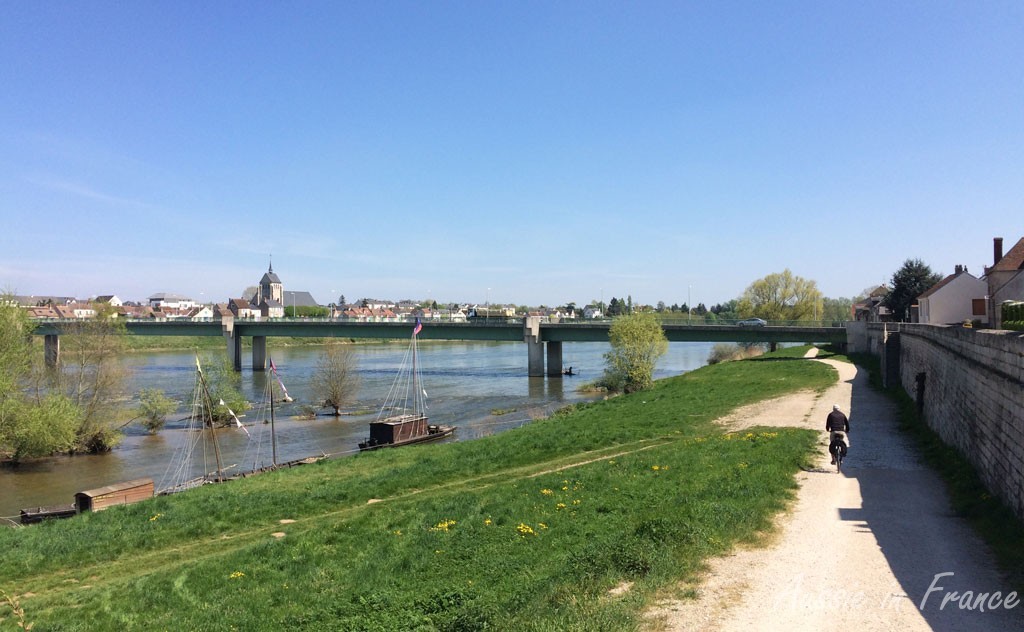 The bike path from Jargeau with the gabarre flat-bottomed boats

By the time we get up and get ready – it’s amazing how much we always seem to need for even a short trip – it’s nearly midday. We take the motorway to Orléans then drive along the Loire until we get to Jargeau. We can’t find our Eurovelo 6 maps, which is annoying, but I’ve been checking out the route on my phone app. The 30 K return ride from Jargeau to Germigny via Châteauneuf-sur-Loire looks good according to the description. 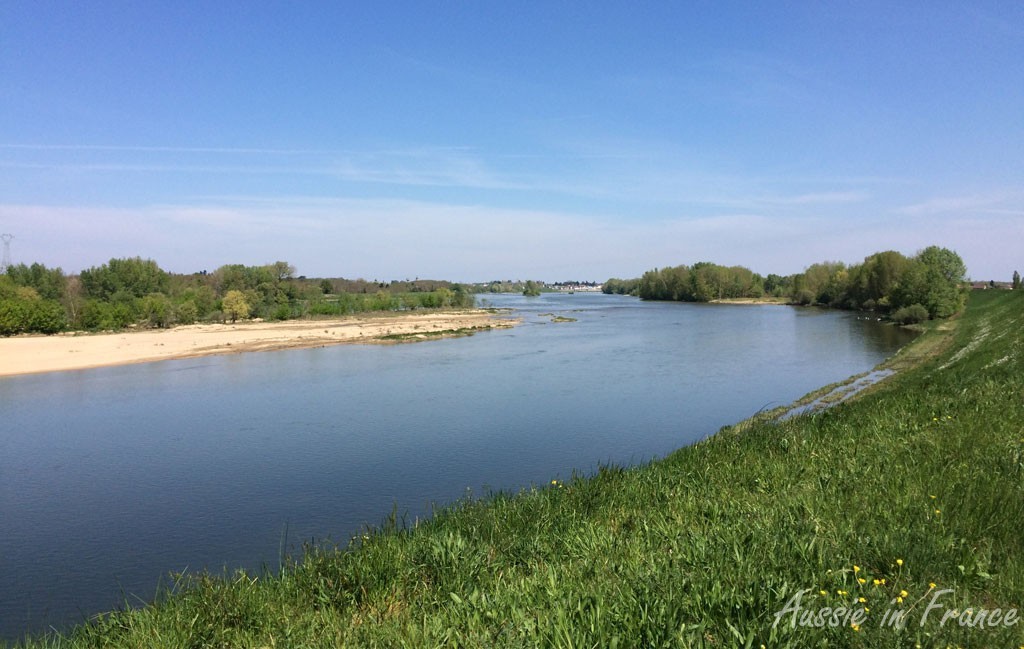 Wide-sweeping view of the Loire

The bike path  along the river to Châteauneuf takes us past the inevitable gabarre flat-bottomed boats in Jargeau before offering wide-sweeping views of the Loire from the levee. 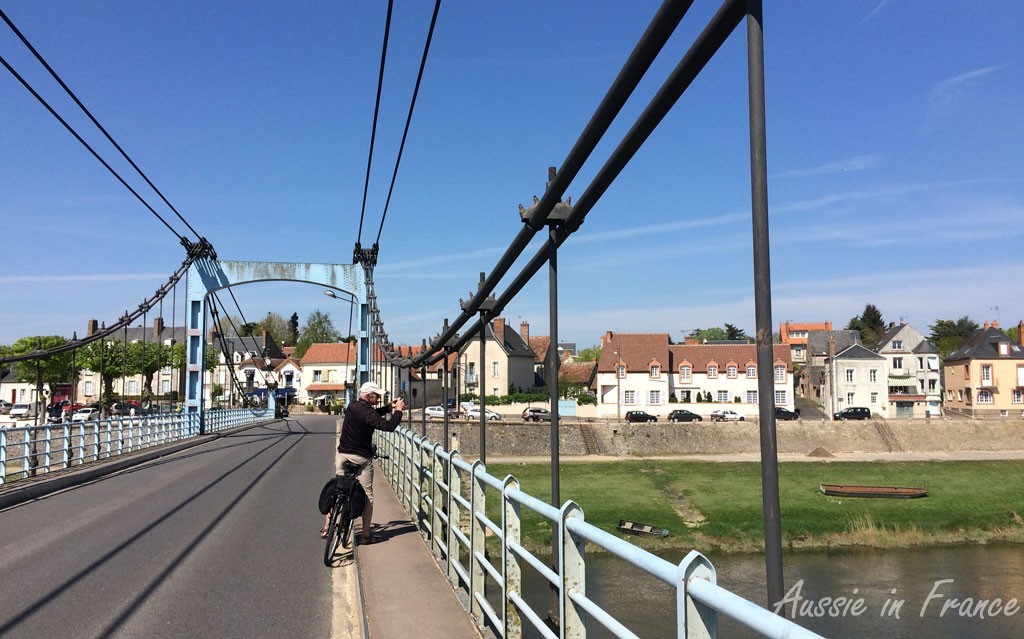 Jean Michel halfway across the bridge at Châteauneuf

At Châteauneuf, we cross the 276 metre long suspension bridge (initially built in 1838) which unfortunately doesn’t have a bike lane, but there isn’t much traffic so we are able to stop and take photos. 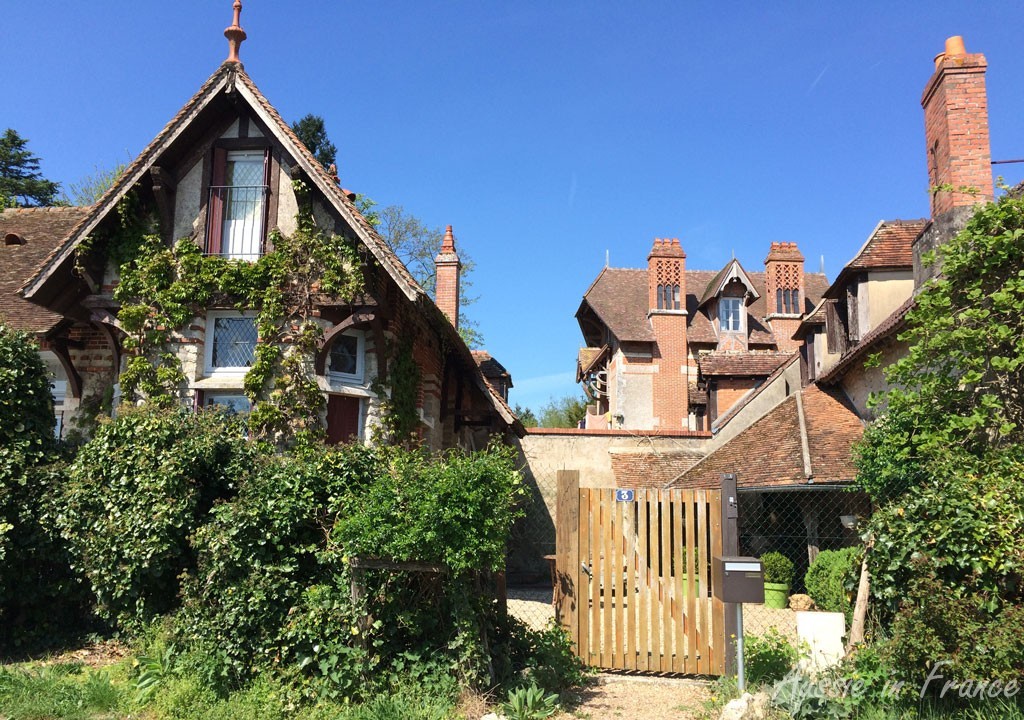 Houses with their unusual chimneys

On the other side, we turn right and evenutally come to a cluster of quaint houses with very unusual brick chimneys. 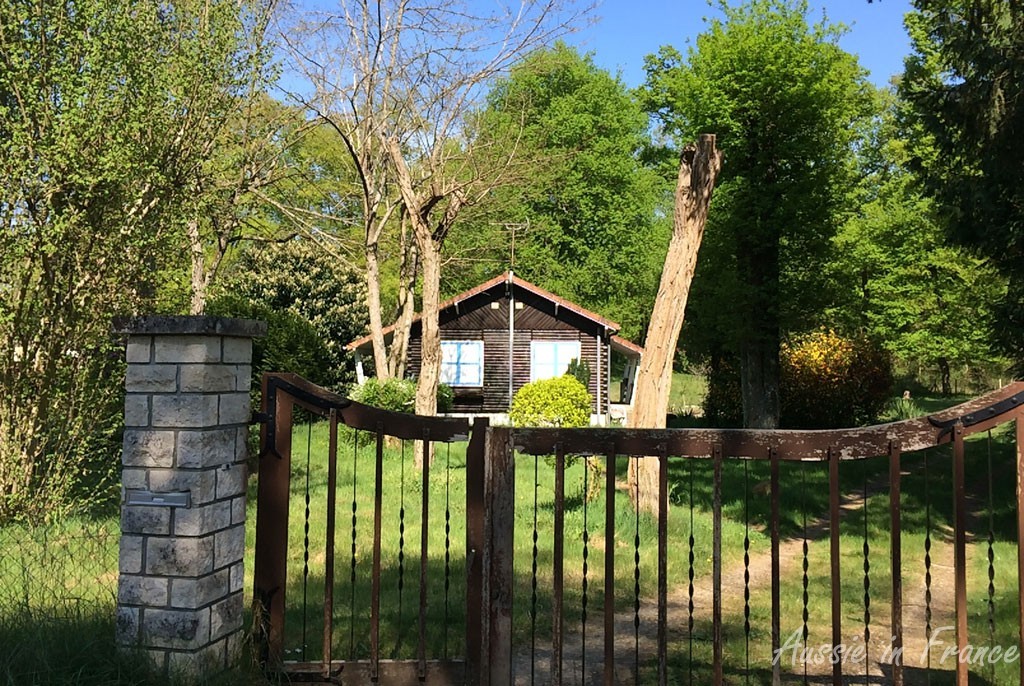 One of the less ramshackle houses

Another village follows full of somewhat ramshackle dwellings most of which are very kitch but I am thwarted in my attempt to photograph the best examples. There seem to be people all over the place! 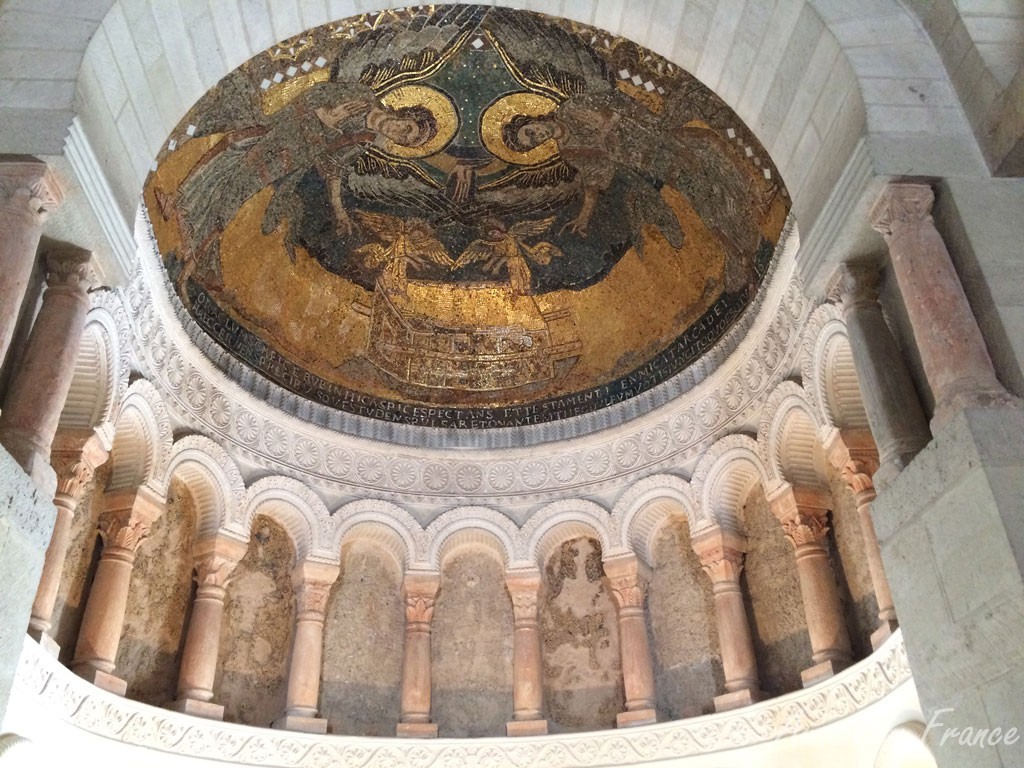 The beautiful mosaic work in the Carolingian oratory in Germigny

We finally arrive at Germigny which is rather dull after the other villages along the way. It is not until we go past it in the car later on that I discover that it has a Carolingian oratory. Jean Michel remembers it perfectly from a previous occasion. I am embarrassed to say that I only remember having a cold drink in the café opposite. Jean Michel makes his usual comment about how wonderful it is to take me anywhere. Since I don’t have any recollection of a lot of the places we go to, I derive new pleasure each time we visit again!  Now that I’m blogging I tell myself that at least I’ll have photos to remind me of where I’ve been. 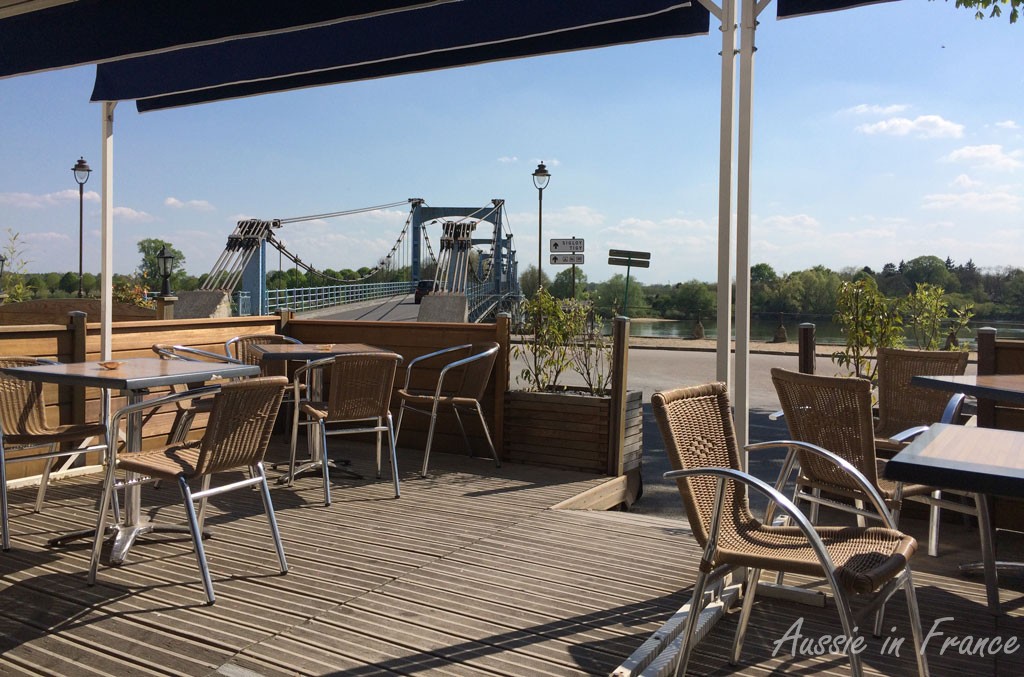 On the way back to Jargeau, we stop at the café at the end of the bridge at Châteauneuf for a Coca Zero – it’s an intermittent fast day so we can’t indulge ourselves any further. 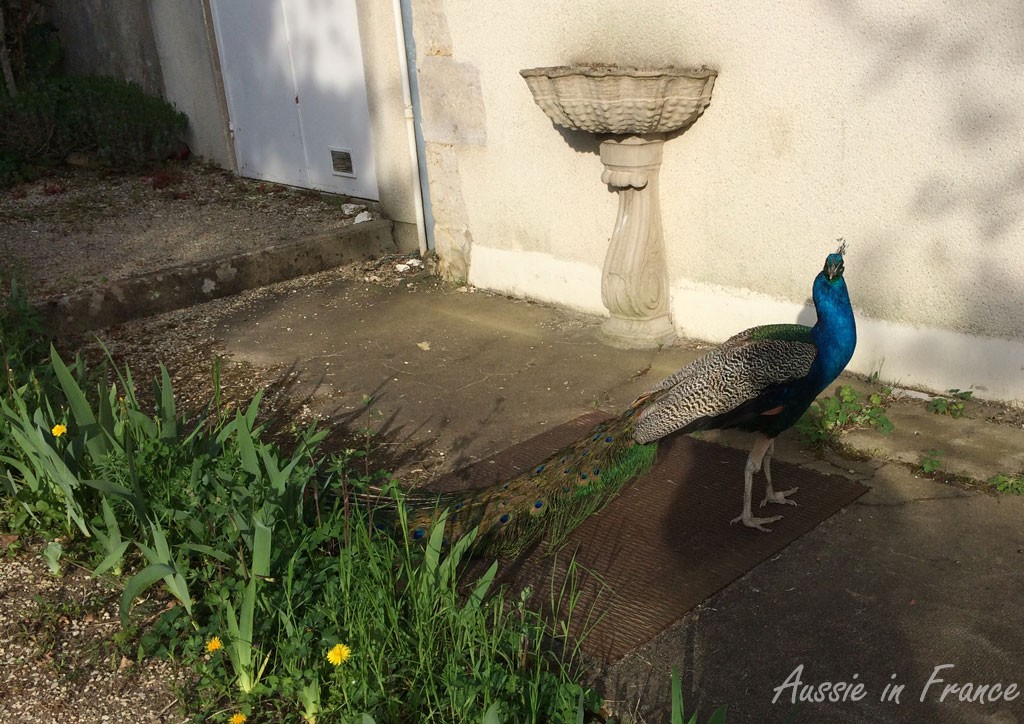 The resident peacock at our B&B

We reach our B&B at about 6.30 pm. The 18th century mansion, renovated and redecorated when the owners bought it twenty-five years ago, is set in a beautiful park. It even has a couple of peacocks. Unfortunately it’s a little early in the season for the male to be spreading his tail feathers. He seems to make a lot of noise though! 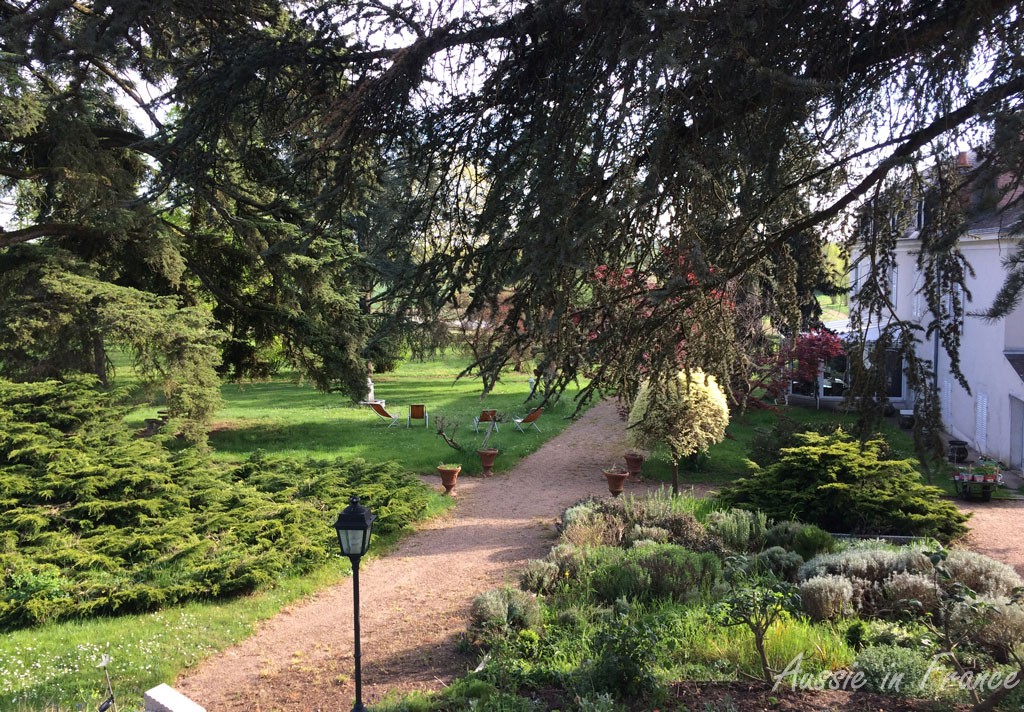 The view of the park from our bedroom

The room is spacious and full of light, its windows looking onto the park on one side and wisteria on the other – the perfect setting for our picnic dinner. Afterwards we walk around the park examining the different types of vegetation. Some of the trees must be centuries old. But we see how much upkeep is needed and are glad of our little wood which is so much easier to look after!

10 Responses to Cycling along the Loire from Jargeau to Germigny