Posted on February 7, 2012 by Rosemary Kneipp 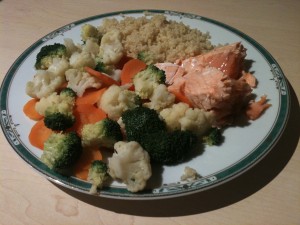 Two weeks ago, in part 2, I told you about my visit to Dr Séjean, a touchy-feely encouraging nutritionist from Martinique. She basically told me to cut out all wheat-based products for three weeks and divide my plate into four: ½ protein, ½ carbs (the contents of a Chinese bowl) and ½ cooked vegetables (cooking and storage tips in part 3). The result was astonishing.  I’d lost 2 ½ kilos and 4 cm from my waist and tummy! She’d also told me to note down everything I ate. Of course, this in itself caused me to modify my diet. What’s more, it hadn’t seemed difficult at all because there wasn’t anything I wasn’t allowed to eat (apart from wheat). I could still have côte de boeuf and oysters on Sunday.

Many of you have talked to me about your weight problems since the last post and one of the main concerns seems to be binge eating. Once I started the diet, I no longer had a problem with that, but as I explained in part 1, I had been listening to hypnosis tapes for a few months and I’m sure they were extremely effective. However, it does seem that making sure you get enough protein, particularly at breakfast, can definitely help. 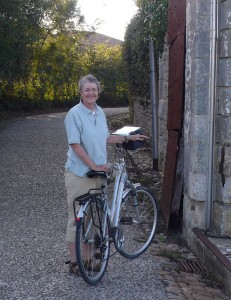 There are various ways to combat the urge to binge. First, you need to analyse what’s causing the problem.  Most people binge from stress so you need to find a way to destress yourself. Relaxation cassettes, yoga, exercise, cycling, soaking in a hot bath, having a shower, going on a buying spree, having a cup of tea – there are all sorts of things you can do instead of eating. It takes one month to change a habit, Leonardo tells me, so if you can get past that first month, you’re halfway there. One method that I had found useful in the past was to go and sit in a comfortable chair if I felt the urge to raid the fridge. I’d close my eyes and breathe deeply, thinking zen thoughts. After a few minutes, the urge would disappear. Most of the time.

And one thing to remember – it’s not because you binged one day that all is lost. If you really want to lose weight and not put it back on, you have to be nice to yourself. OK, so today you ate all those biscuits or foie gras or whatever. But tomorrow’s another day. In fact, tomorrow is the first day of the rest of your life! Pretty good, huh? It means you can always begin again. 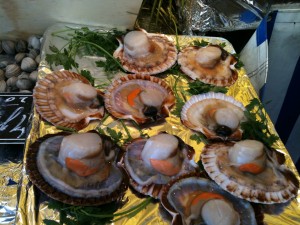 Doctor Séjean looked at the list of what I’d eaten during the previous two weeks and noticed that I didn’t eat much fish. What I like is seafood (especially oysters on Sunda and coquilles Saint Jacques), reef fish and salmon, not those insipid white fish you find in France. If you have to add beurre nantais, there doesn’t seem to be much point in eating bar (bass) instead of entrecôte. However, I had tasted raw fish in the form of capaccio in Venise the year before and figured I could give it ago. 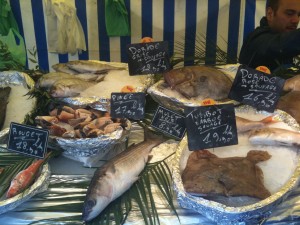 Fresh fish at the market

I soon discovered that most fish is overcooked, particularly in restaurants and that when it’s raw, it’s delicious. Also, it doesn’t smell out the kitchen. I’d ask the fishmonger on the market each week for the freshest fish and had soon tasted practically everything tartare, sprinkled with a bit of lemon and olive oil. And after about a year, I started liking it lightly cooked as well. Now we buy different types of fish on the market on Sunday that we eat at each lunch and dinner until Tuesday night. I mainly like mackerel, limande (lemon-sole), rouget (red mullet), carrelet (plaice), lotte (monk-fish) and turbot, and I dislike colin (hake) and cabillaud (cod).  I prefer bar (bass), dorade (sea-bream) and tuna uncooked. I deep-freeze fresh salmon and defreeze it and cook it in the microwave. It’s really easy and delicious when it’s not overcooked. So I guess that I now eat fish at about half my meals. 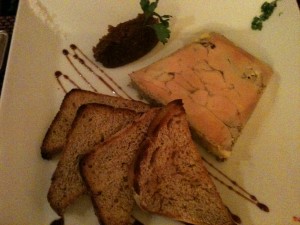 But Christmas was coming up and I was a bit worried about putting back on my newly-lost kilos. Dr Séjean told me not to worry, that I should just make sure that if I drank alcohol, I always ate something with it. That was a surprise but she explained that the food absorbs the sugar whereas if you just have a glass of wine by itself, you store the calories immediately.  She said that if I ate foie gras (as if I wouldn’t!) I should have it with toasted bread and, generally speaking, if I was going to have bread, I should have it toasted whenever possible because that way, it doesn’t have a bloating effect. 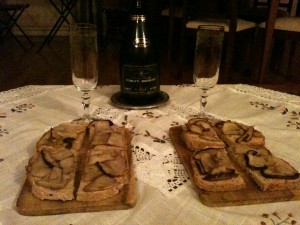 Wild mushrooms on toast for apéritif

We were planning a few côtes de boeuf of course but she advised me to eat them with vegetables and not just potatoes, for example.  She reminded me not to forget the carbs and said I could re-introduce wheat-based foods after another week. But in the meantime, I’d got used to eating quinoa and polenta so I wasn’t really missing the wheat very much except for home-made fresh bread. Another thing she told me is that I should have at least 2 tablespoons of oil a day.

Having recharged my batteries, I took another appointment for a month later. Watch out for Part 5 and let me know how it’s going!

This entry was posted in Dieting, Food, Lifestyle. Bookmark the permalink.