Take a look at the following photo taken from our bike path. What do you think of the view? 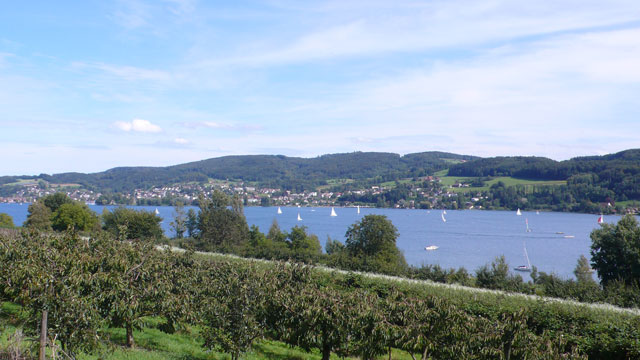 View of Lake Constance cycling down to Stein am Rein

Amazing, isn’t it? Well, there is only one way you can have repeated views like this one and that’s to pedal up and down the hills, walking your bike up when it’s a 15% climb! 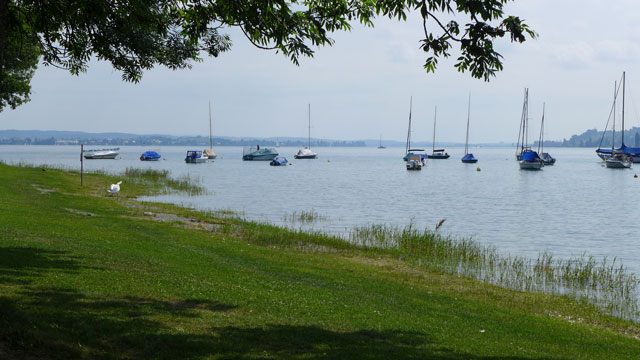 Having a break at Gaienhofen between two hilly bits

We debated whether to drive to somewhere else on the lake and explore an area we don’t know or to set out from the hotel directly on the bike path for Stein am Rhein which we visited two years ago. I voted for the second solution because it’s a lovely little town and the views on the way are truly magnificent. I’d forgotten just how many hills there were though. 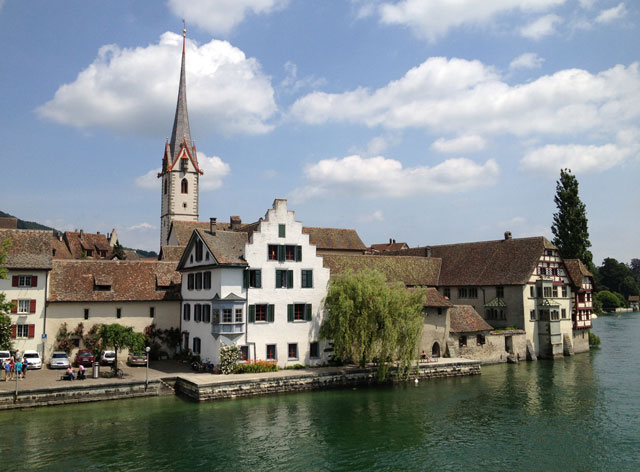 Stein am Rein from the bridge over the Rhine

By the time we reached Stein, my knees were a little wobbly but I didn’t regret it for one minute. The views are certainly worth it. 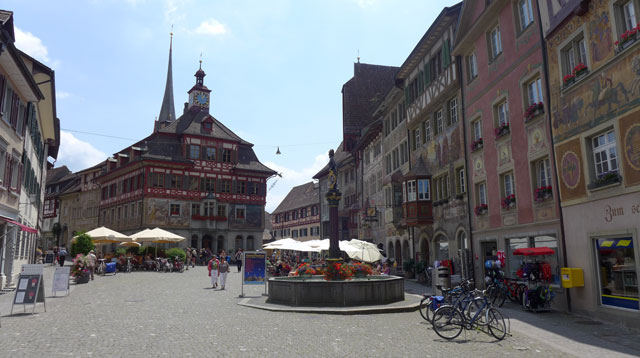 Main quare at Stein am Rein

The last time we were in Stein, on a Sunday in August 2011, there were musicians in the main square with trestle tables and benches. Today, there were bikes and people and it was just as charming. 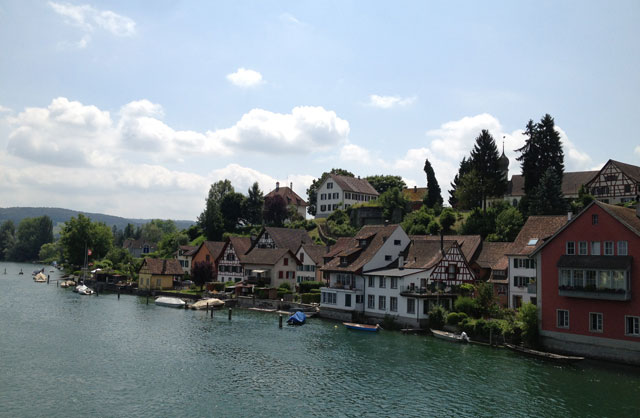 We’d consulted our ferry schedule ahead of time and instead of going back along the same path, we went round the other side of the Untersee, staying in Switzerland, with the aim of catching the 4.11 pm ferry in Steckborn. I was secretely hoping there wouldn’t be as many hills on the other side. 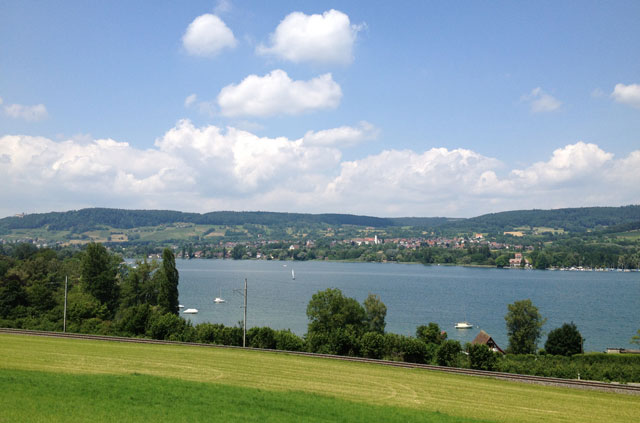 Our view at lunch from our picnic bench

Well, there were fewer and at least they weren’t the same ones! After yesterday’s experience, we took a picnic lunch and ate it on a bench overlooking the lake. No restaurant could have afforded a better view. 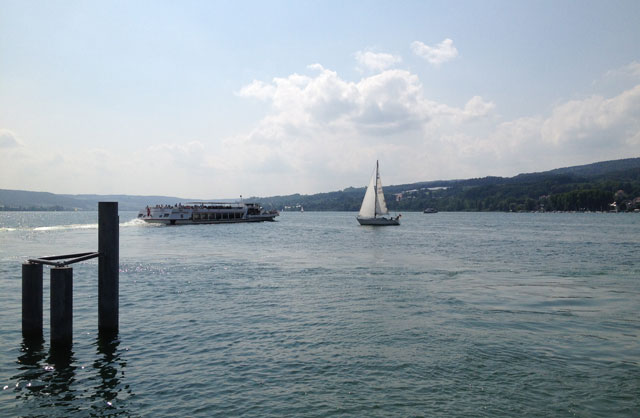 We had to wait an hour or so for the ferry in Steckborn, but that was not a problem. It was so peaceful sitting on a bench in the shade watching the activity on the lake. 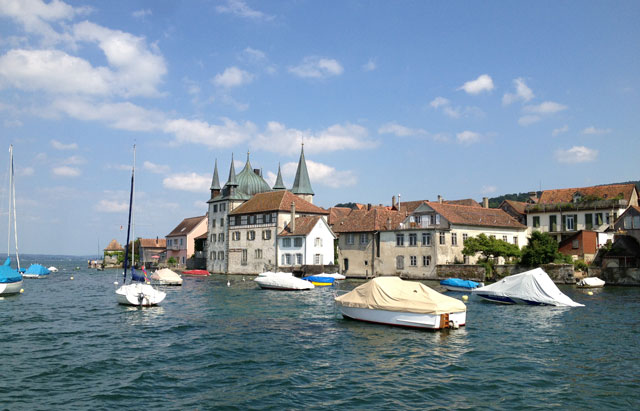 We were home by 5 pm, which is quite a record, particularly since we cycled more than 50 kilometers. 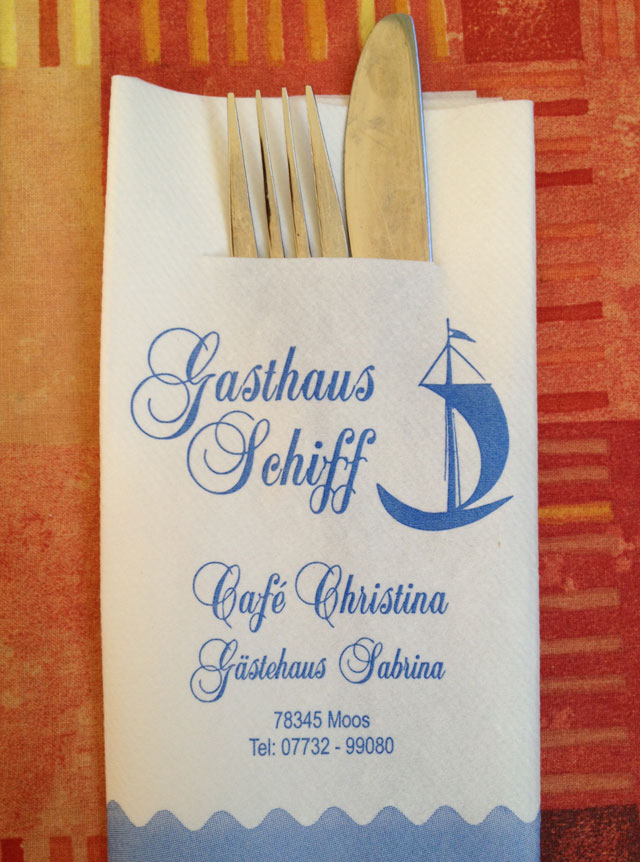 And then we had dinner at the gasthaus restaurant which has a menu in English and a waitress whom I can communicate with. An excellent meal and a last taste of Germany before we go back to France tomorrow, without the strain associated with not speaking more than a smattering of German, with no one else but myself to blame of course.

This entry was posted in Cycling, Germany, Switzerland and tagged cycling on Lake Constance, Eurovelo 6, Steckborn, Stein am Rein. Bookmark the permalink.