Cyclng in Germany #15 – Turgermünde, the prettiest village on the Elbe

After Magdeburg and the Green Citadel, we continue on to our next location in the little village of Dahlenstedt near Stendal, where we are to spend 3 nights, including a rest day. We first heard of this little town from guests who came to stay at Closerie Falaiseau last year. Henri Beyle, the author of Le Rouge et le Noir took the pseudonym of Stendhal, in hommage of his great passion for Wilhelmina de Grisheim in 1807 and 1808. 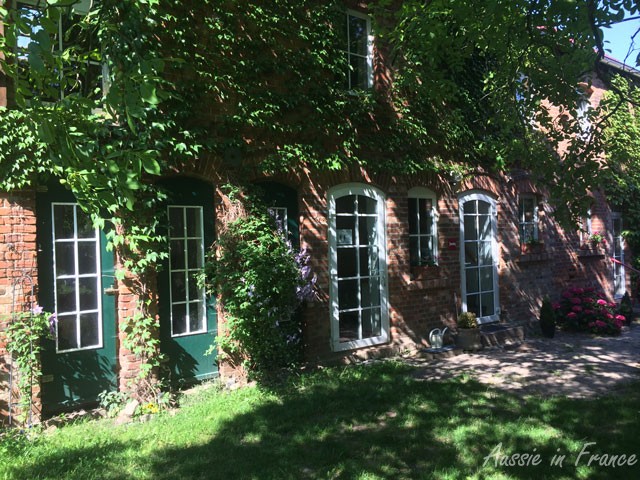 Pension Kunsthof with our door on the far right

When we arrive, it is blazing hot and Kunsthof Pension with its shady trees is very inviting. Several old restored red brick farmhouse buildings form a grass-covered inner courtyard. Our large room has a kitchen corner, with a sink and electric jug. My heart sinks when I see that only the windows on one side have proper curtains. On the other side, there is a flimsy white curtain on the glass door and a window with no curtains at all. As it turns out, the ivy-covered wall opposite keeps out the 4 am sunlight. 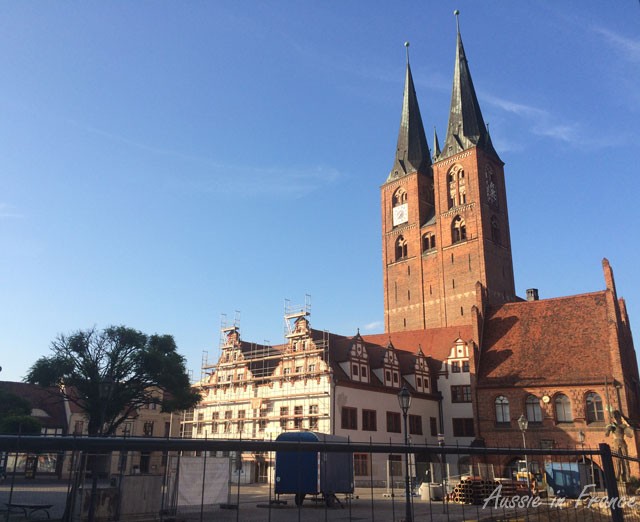 It’s too hot to even think about cycling, it’s Sunday and we’ve forgotten to buy something to eat so we drive into Stendal for dinner. We’re relieved we didn’t choose a hotel there! The only landmarks are a large church with roadworks in front and the Uengling Gate, a red-brick tower regarded as one of the most splendid late medieval town gates in northern Germany. 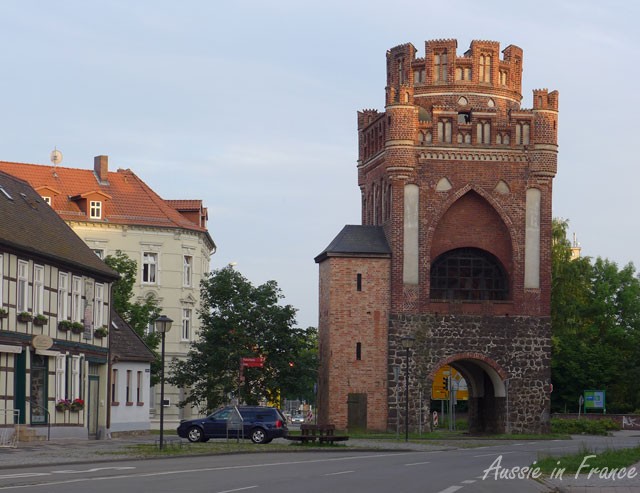 We can choose between Asian, Italian and a steakhouse. Surprisingly, the waitress speaks English and we order a glass of rosé and an entrecôte and chips with side salad. The entrecôte is very thick and served in a red-hot pan. 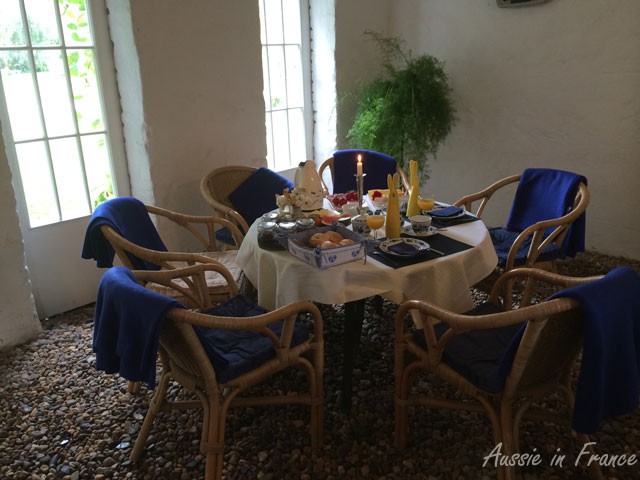 The breakfast room at Kunsthof Pension

We sleep well, despite the paving stones outside our window that make the passing trucks and cars sound like a thundering train and have a good breakfast in a very pleasant room with large windows overlooking the courtyard. We are the only guests. 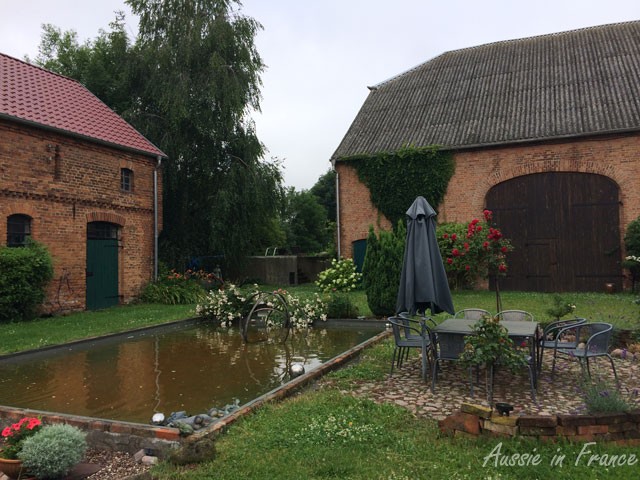 The view from the breakfast room

It’s very overcast and the weather report says it will rain in the afternoon so we drive to Turgermünde and park near the bike path, leaving our visit of the town until our return. 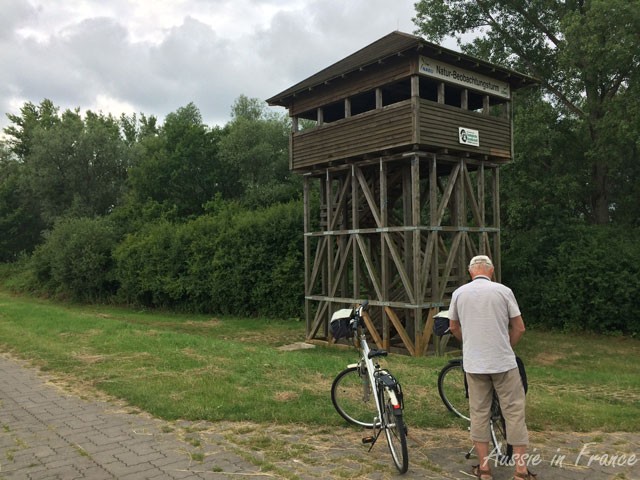 Bird observatory along the bike path

At this part of its course, the Elbe divides into several branches, making it perfect for wildlife. We stop at a bird observatory and take our binoculars up. 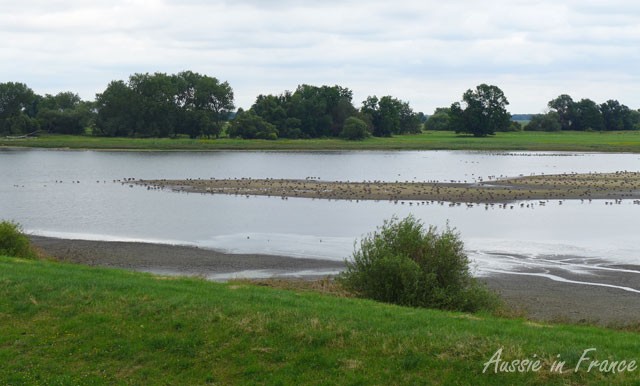 The view from the bird observatory

We also see stork nests along the way which reminds us of the Danube last year. 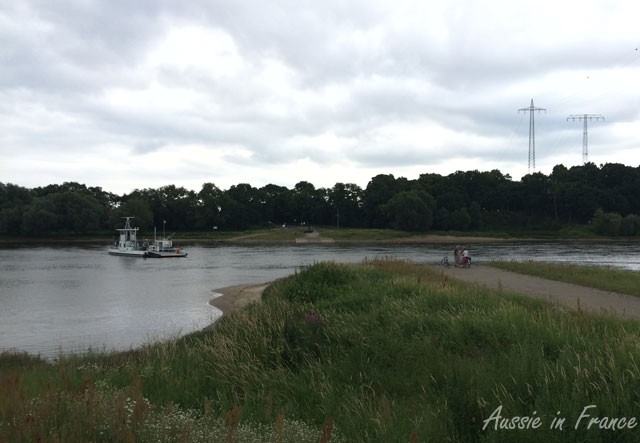 At Grieben, we find a biergarten full of other cyclists sitting down to lunch at 11.30 am which is a little early for us. We have a not-very-good (and expensive) cappuccino instead. After crossing on the ferry near Ferchland, we go north to Jerichow, a very dull little town. 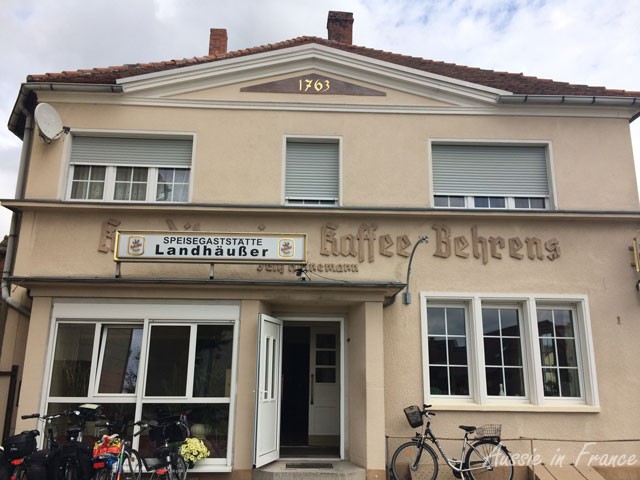 By then, we’re hungry so we choose not to eat at the imbiss (Turkish snack bar) but, encouraged by the number of bikes outside, at Kaffee Behrens, built in 1763. It turns out they belong to the local soaks! 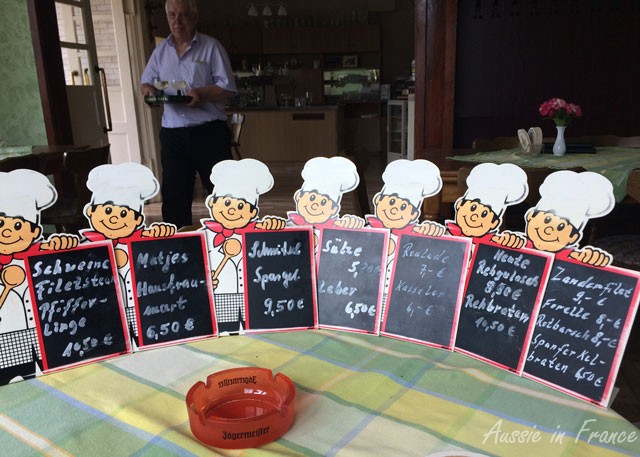 The owner comes over with a set of menu cards which he flicks open and places in a hemisphere on the table. Our schweinfilet and pfifferlings (pork fillet and chanterelle mushrooms) are a good choice. 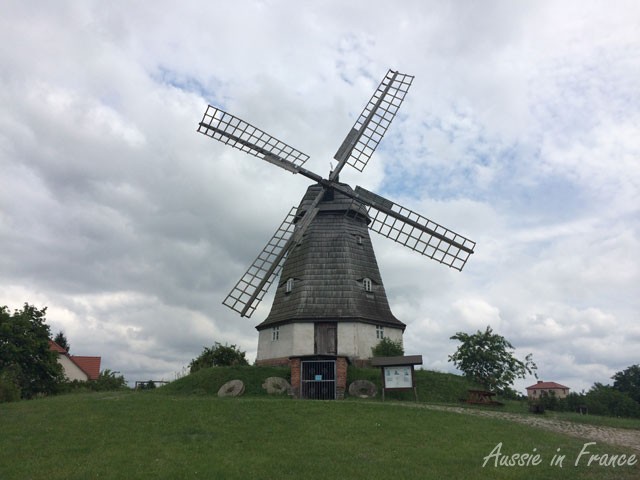 Afterwards we visit the local windmill (there are so few places to see that we follow up every lead). 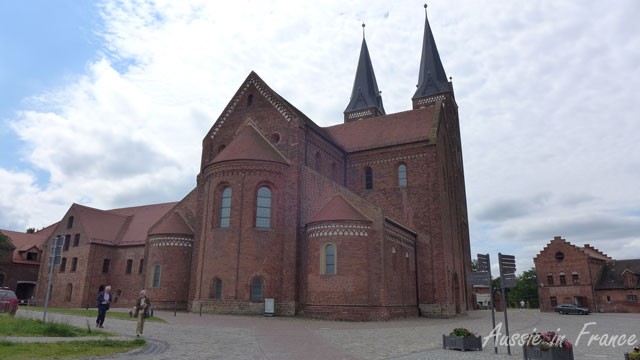 We also check out the red-brick Romanesque kloster which is on the Compostela route. Unfortunately, it’s closed. 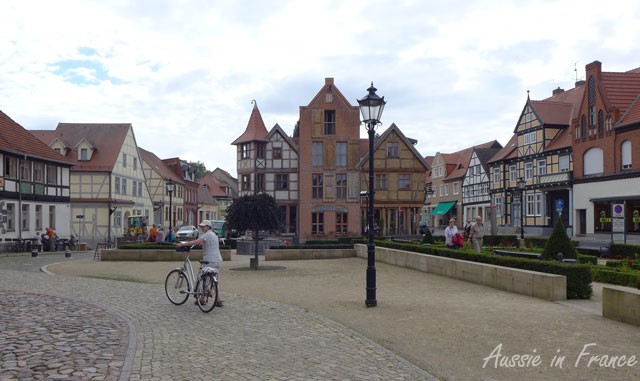 After cycling a total of forty-five kilometers we arrive back at Tungermünde and I’m very saddle sore! 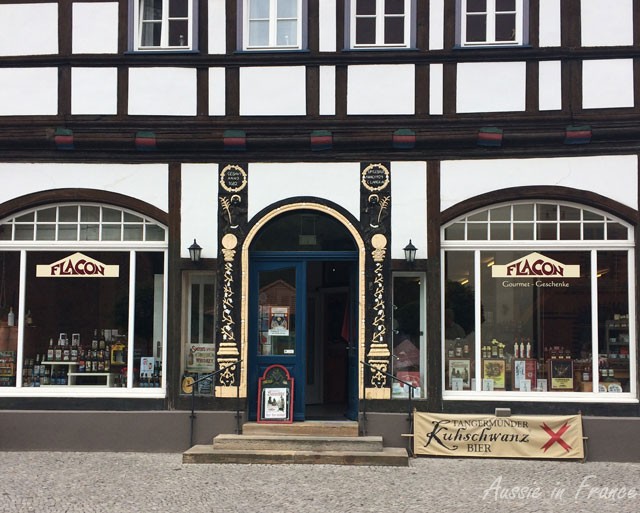 And here, to our immense surprise, we discover that Tangermünde is the prettiest village we have seen on the Elbe! This charming little mediaeval Hanseatic town is hardly mentionedin our guidebooks and there is hardly a tourist in sight. 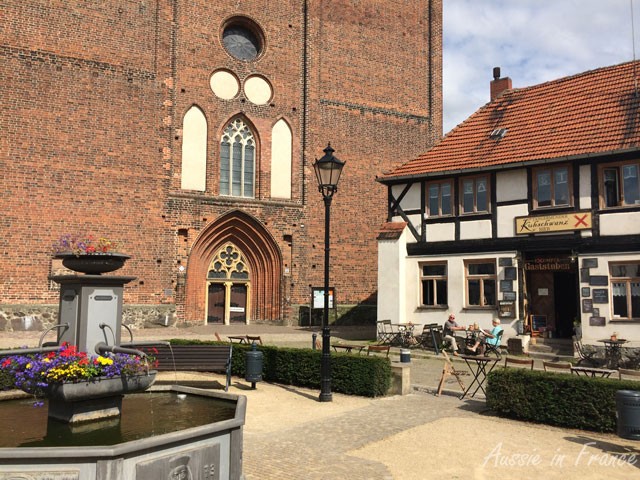 We have kaffee and kuchen at the first café we come to. Jean Michel insists on having the only two desserts on the menu (I later see they have large cakes inside). The Petit Feodora is fine – a rather rich fudge-like cake but the Süsser Klump, a regional speciality, does not appeal to me at all. 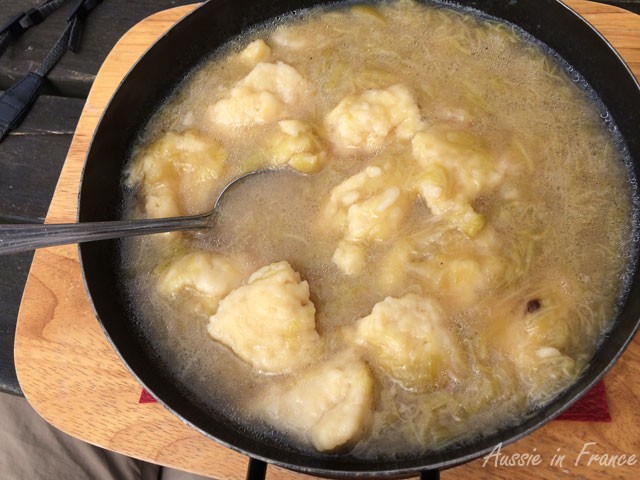 It has some sort of thick dumplings floating in thin rhubarb soup. Jean Michel valiantly eats half of it along with half the Feodora. 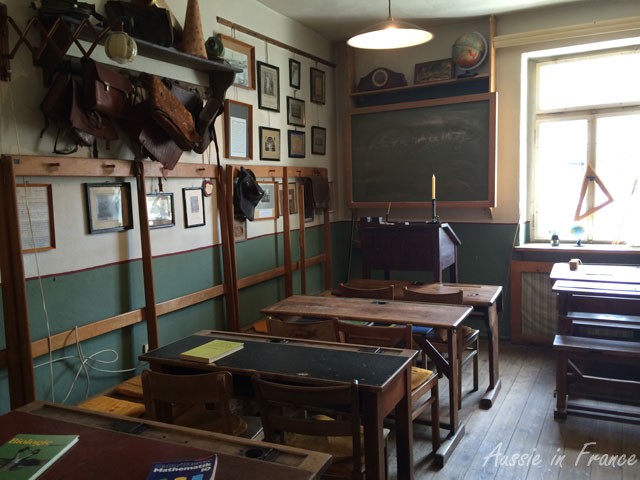 The café-restaurant turns out to be an old school with the original classroom set-up (or so I understand).

We visit the red-brick church of St Stephan’s with its painted gallery. The church was completely rebuilt after being destroyed by fire in 1617. 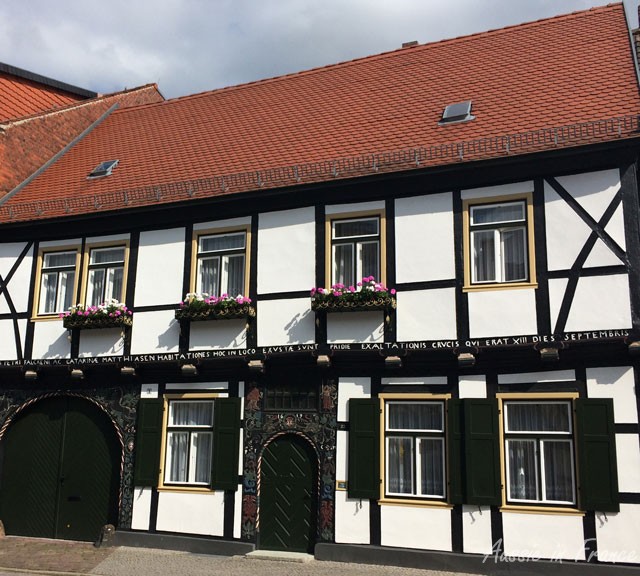 But what we really like are the beautiful arched doorways on the half-timbered houses. 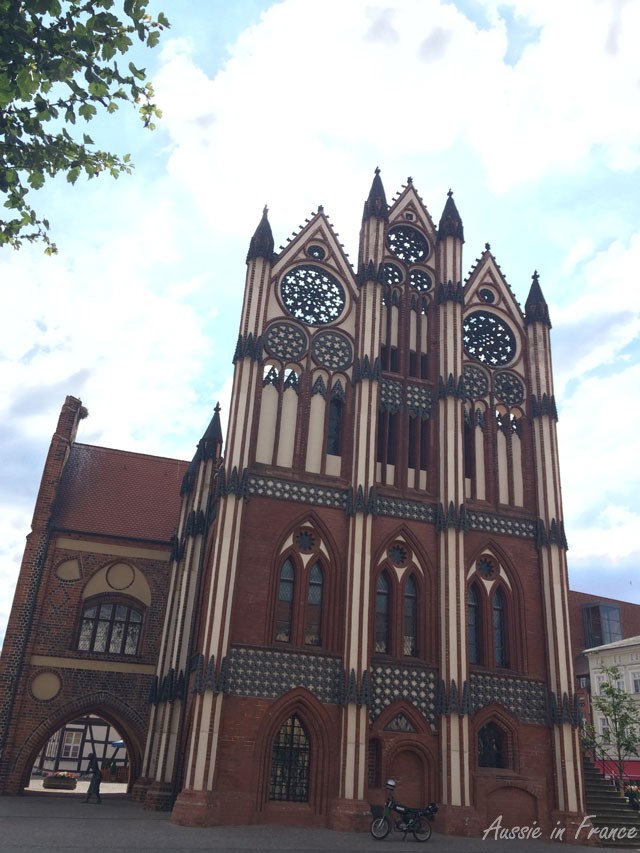 The Rathaus with its complex gothic architecture

The rathaus, built in the 1430s, with its gothic and Romanesque structural elements, is also very striking. The façade has three staggered gables each with a miniature spire. reminiscent of the gothic architecture on cathedral exteriors. 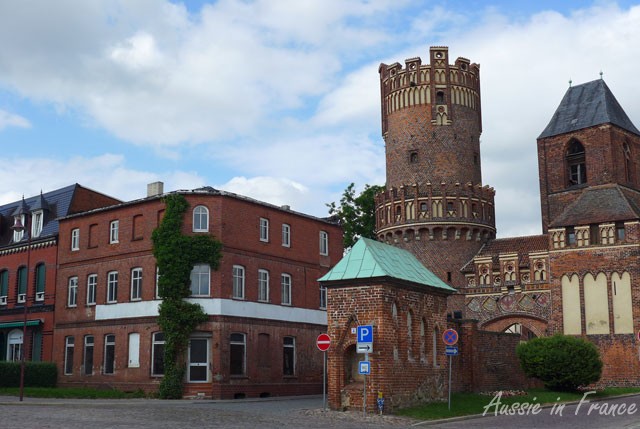 The impressive entrance to the town, with its round tower, has the same type of features, including the off-white contrast on red brick. 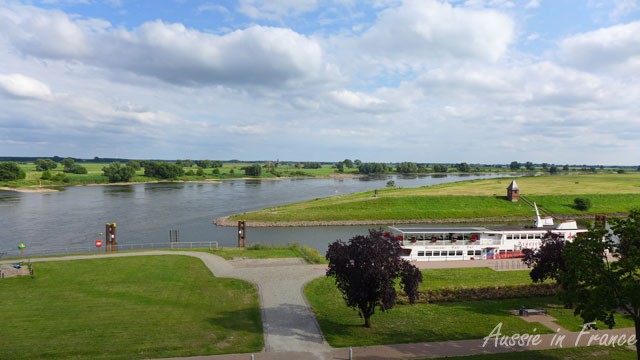 View of the Elb from Tangermünde

The Schloss Hotel in the ramparts has a little garden behind it with a view of the Elb so we cycle back along the river to the car, having managed to escape the rain altogether. What a wonderful day!

This entry was posted in Accommodation, Architecture, Cycling, Germany and tagged cycling on the Elbe, Tangermunde. Bookmark the permalink.

44 Responses to Cyclng in Germany #15 – Turgermünde, the prettiest village on the Elbe