Cycling along the Danube – Watch out for trains!

Today I nearly got run over by a train when on my bike. When I heard the blast just next to me, a searing pain shot through my head and my legs turned to jelly. I immediately backtracked and got out of its way. Then I burst into tears. 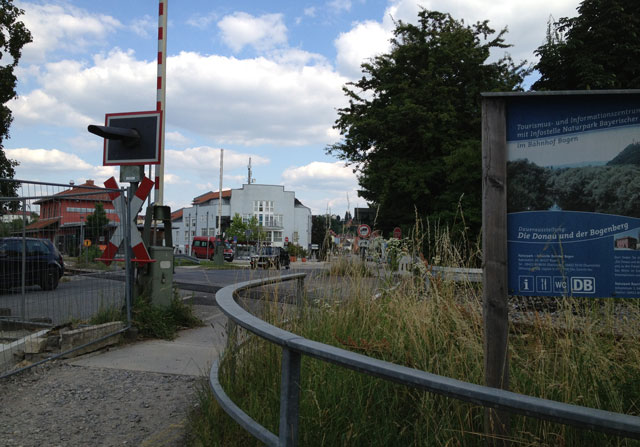 Now how could this happen, you may well ask. It’s because level crossings in Germany don’t always have boom gates and when they do, they don’t necessarily extend to bike and pedestrian paths. I was a little sluggish this morning when we set out on our bikes from Riebersdorf near Straubing and had trouble keeping up with Jean Michel. 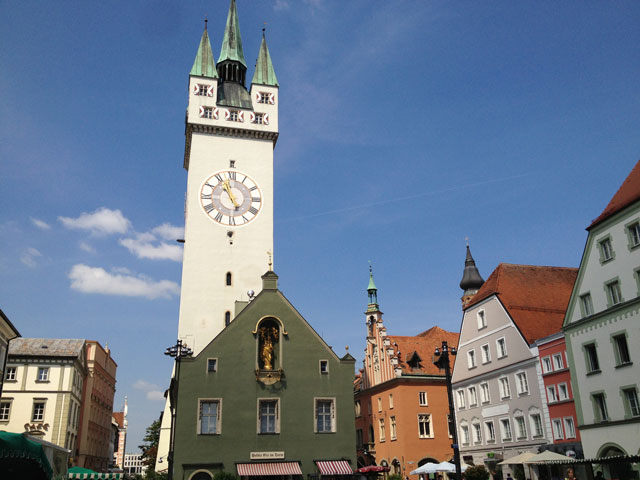 The clock tower in Straubing

He got to the level crossing in Bogen before me and crossed the tracks, without noticing the flashing  red light over to the left. When I rounded the corner of the bike path and saw him across the tracks, I didn’t even look to see if there was a train – there are a lot of disused train tracks in this part of Germany – and followed him. That was when I heard the blast.

I looked right and saw the train coming along the track VERY FAST. I have never been so frightened in my life. After a near accident that you have successfully avoided, the important thing is to remember that it didn’t happen and not imagine the consequences. We went to a pharmacy to get some aspirin to relieve my horrendous headache which gave me something practical to do. 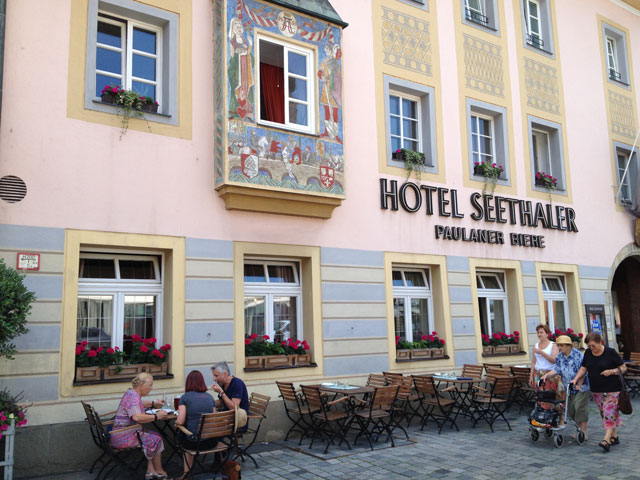 I don’t know what the girl in the pharmacy thought was wrong, but she discreetly gave me a packet of tissues which I thought was very sweet of her. The pharmacy also had a water distributor and paper cups which is very civilised. 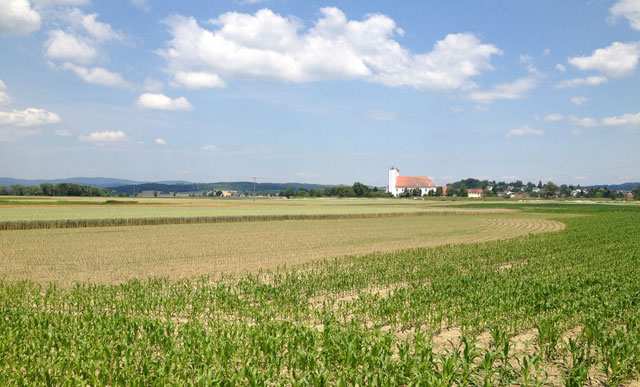 Typical scenery between Straubing and Mariaposching

By then I had calmed down and could get on my bike again but it was not our most successful day. There are usually gasthofs all along the Danube, but the few we found were all closed on Monday, including the radler freundlisch one which I didn’t think was very cyclist-friendly at all! What’s more, we hardly ever saw the Danube, just fields of crops. 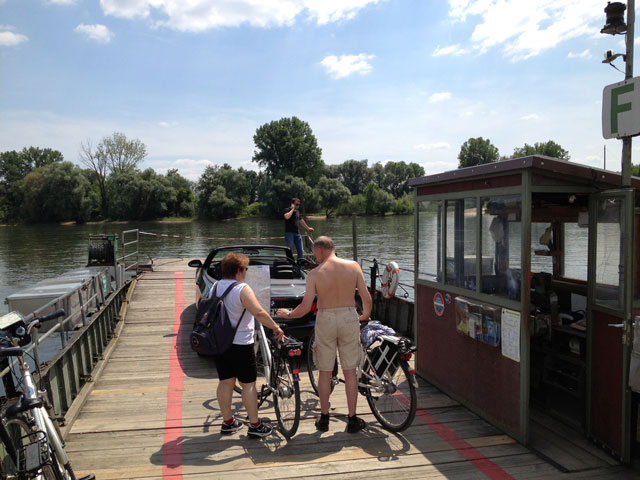 Crossing on the ferry – the couple is not us

We hoped that Mariaposching, the village from which the ferry was to take us across the Danube might have something open, but all I saw were a couple of radler zimmer signs (rooms for cyclists) which weren’t much use. However, we got to the ferry just in time so at least we didn’t have to wait around in the boiling sun. It was the most rudimentary ferry we’ve seen so far – and the cheapest at 3 euros for us and our bikes. 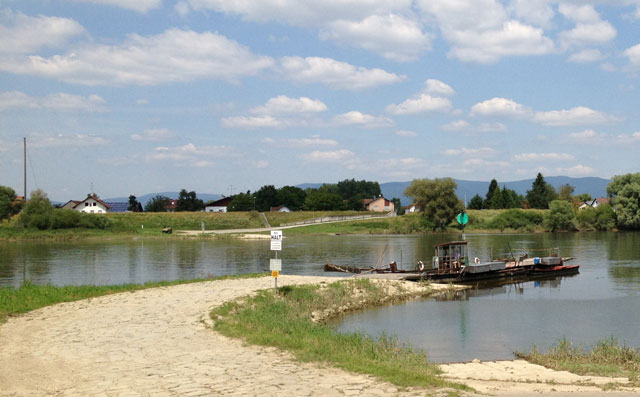 The ferry from the banks of the Danube

Stephans-posching on the other side was much bigger but nothing was open there either so since it was 3 pm by then, we sat on a shady bench with a harvesting machine droning opposite and ate all our emergency biscuits. 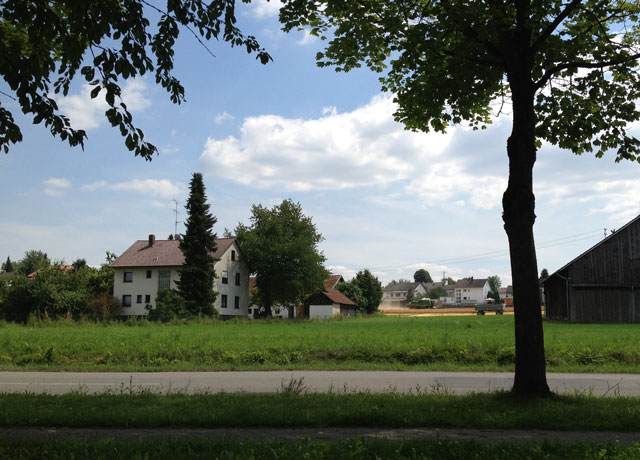 An hour later, having ridden along a very busy road and over a very long bridge whose bike/pedestrian section was closed for some unknown reason, we were back in Bogen where all we could find to eat was a cheese and tomato sandwich and an ice-cream sunday. At least the ice-cream was good and the chairs had padded seats because 50 kilometers of flat paths without a proper lunch break take their toll. 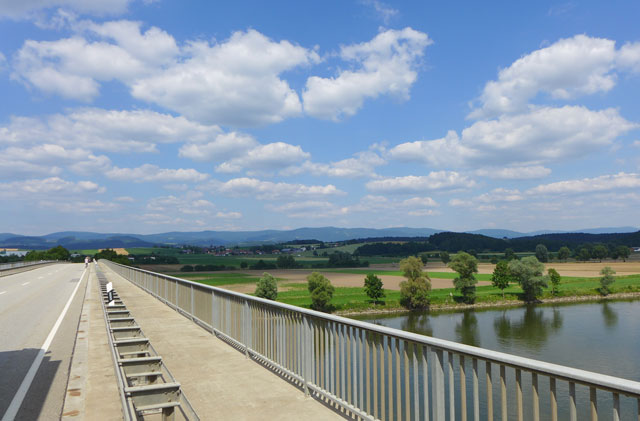 The bridge over the Danube with its pedestrian/cycle lane closed

Now it’s 8 pm and we’re waiting for our Rheingraf feinherb riesling 2009 bought in Straubing this morning to be cold enough to drink.

This entry was posted in Cycling, Germany and tagged cycling, danube, ferry at Maria-poschling, level crossings in Germany. Bookmark the permalink.

43 Responses to Cycling along the Danube – Watch out for trains!