We arrive at our Black Bear Hotel (Schwarzer Baer) about 2 pm in stifling heat and appreciate the coolness of the rooms. We don’t have a terrace but we have a little closed-in verandah afffair with a leadlight window which is very neat. Even neater is the fact that the curtains are of the total blackout sort. The room will not be flooded with light from 4.30 am onwards as it was at the Radhaus! 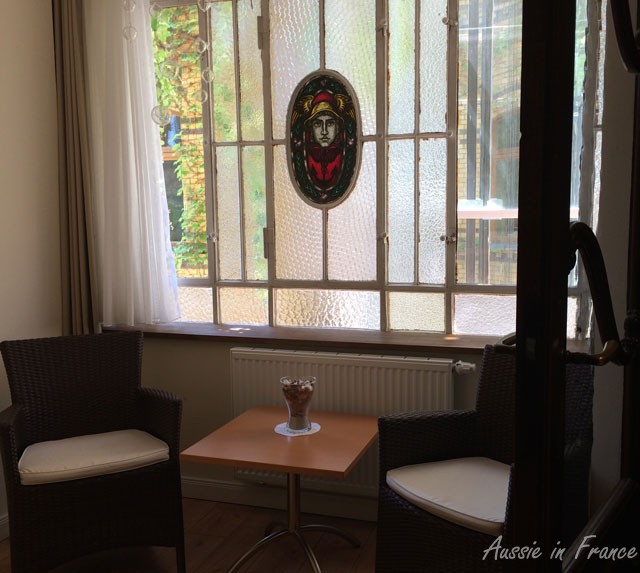 The leadlight in our alcove at Stathotel Wittenberg Schwarzer Baer

After a long siesta, we explore the town. It is very attractive with its renovated Marktplatz appropriately adorned with statues of Luther and fellow reformer Melanchthon. Like most town centres, Wittenberg is pedestrian (and bike) only. 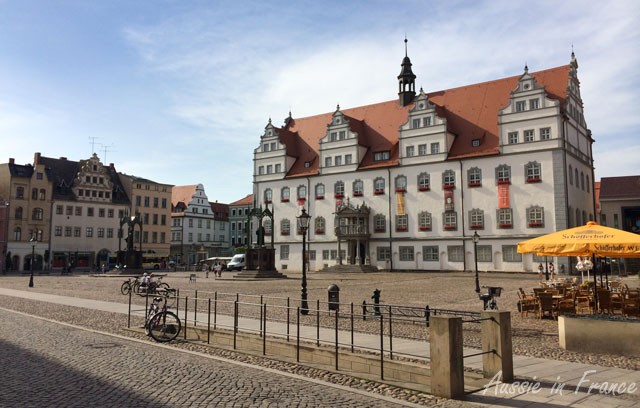 Rathaus with statues of Luther and Melanthon

Unlike Dresden, Wittenberg was mostly spared in the Second World War, but it doesn’t have many historical buildiings because it was bombarded by the Austrians in 1760 during the Seven Years War during the Prussian occupation. It was later occupied by the French in 1806 and stormed by the Prussian Army the next year. 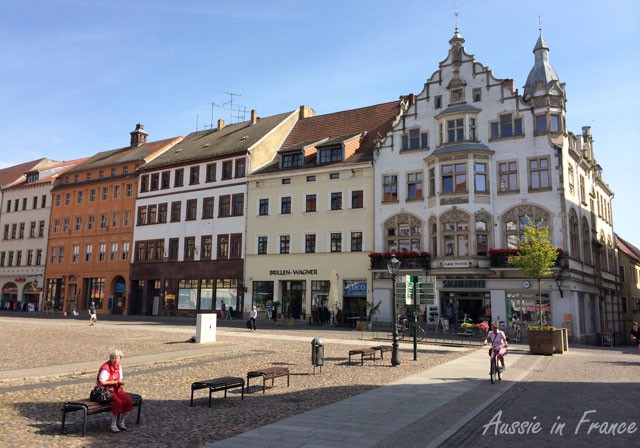 Other side of Marktplatz

As we walk through the streets, we nevertheless discover several 16th century entries some of which have been restored, others not. 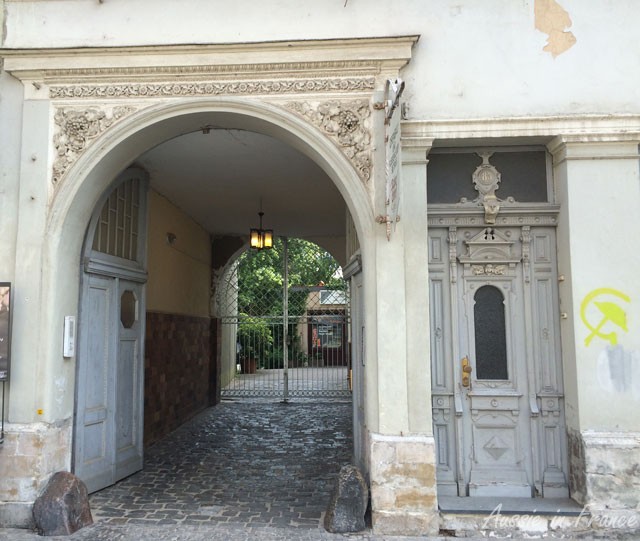 In front of one building, we see a before and after photo of the house where the painter Cranach once lived. The difference is stunning. 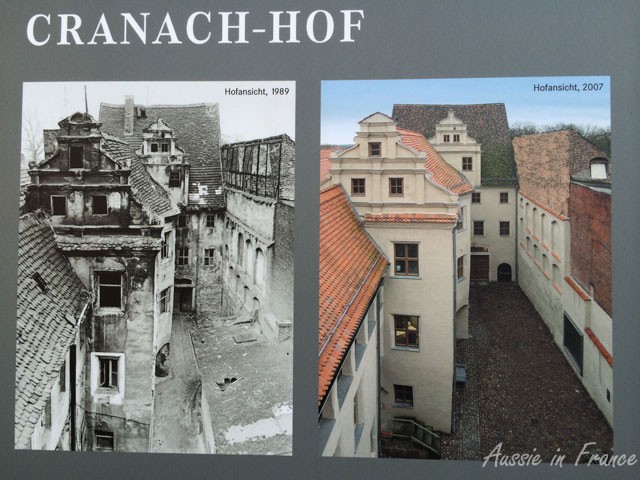 Restored courtyard before and after

We also see a lot of leafy courtyards often containing biergartens. In one, there is a scene painted on a wooden panel representing life-sized figures of Katharina and Martin Luther and two of their children, with holes instead of faces so Jean Michel and I take turns to stick our heads through. A man seated at a nearby table comes over and offers to take our photo! 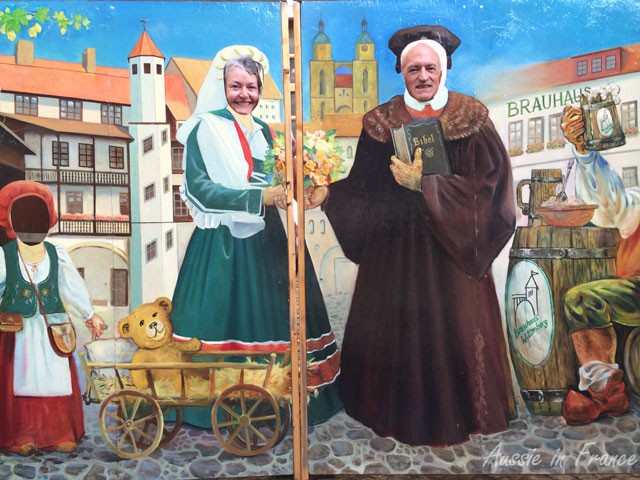 Unfortunately both of the town’s churches are being renovated in preparation of the 500th anniversary of the Reformation which will take place in 2017. 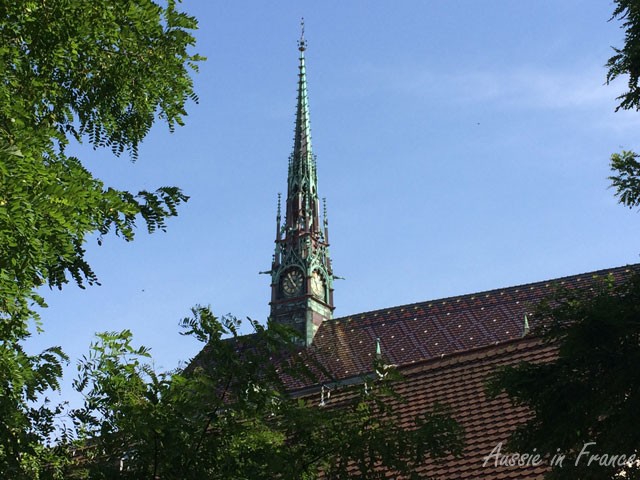 The roof of the Schlosskirche, the only part not being restored, taken from the little memorial garden next to the Tourist Information office.

In 1517, Luther nailed his 95 theses on the doors of the Schlosskirche which was badly damaged by fire in 1760 as a result of the Austrian bombardment. It was rebuilt and later restored at the end of the 19th century. The orignal wooden doors were replaced in 1858 by bronze doors with the Latin text of the theses. Inside are the tombs of Luther and Melanchthon, but we are not able to go inside. 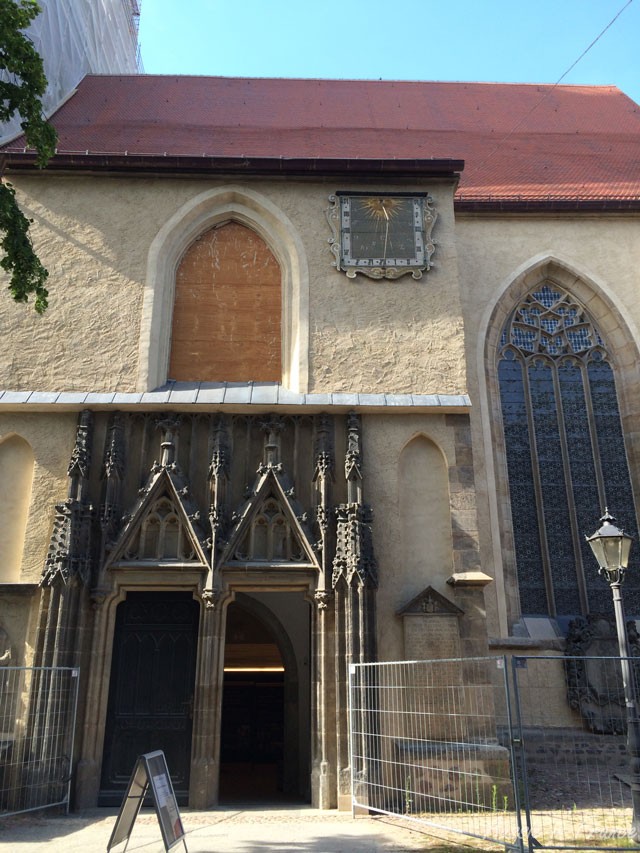 The parish Church of Saint Mary is also being renovated so we aren’t able to see Lucas Cranach the Elder’s Last Supper, Baptism and Confession. There’s a slide show though so we are able to get an idea of what we are missing. 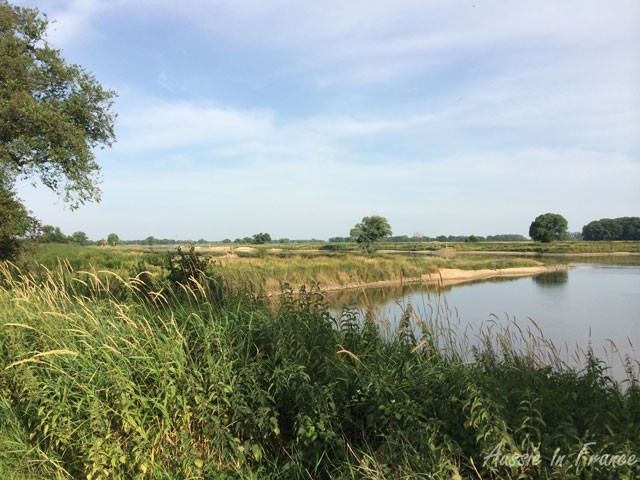 Marshland around the Elbe

As the heat has died down somewhat, we pack a picnic dinner (it’s an intermitttent fast day) and cycle 15 kilometers to Elster. The countryside is rather marshy, quite different from what we have seen along the Elbe so far. 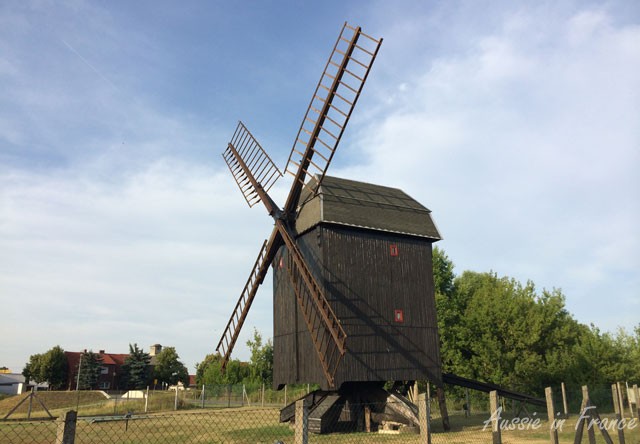 As we get closer to Elster, we see a restored windmill with a picnic table next to it but without a drop of shade! 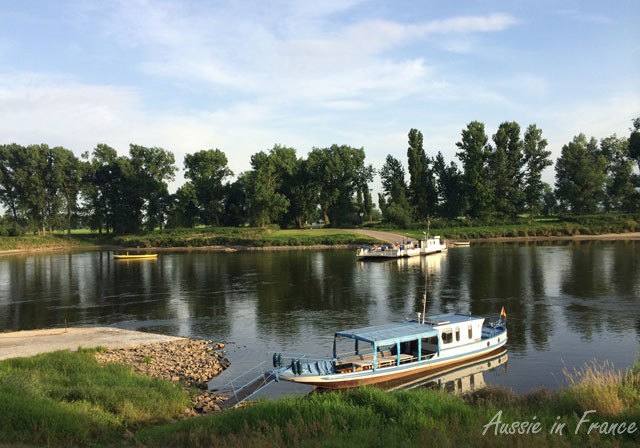 We end up having our picnic on a bench in the centre of Elster, watching the ferryman closing up for the night with the France-Germany soccer match in the background. When its over, there is no reaction from the adults but the children clap. Hmm. 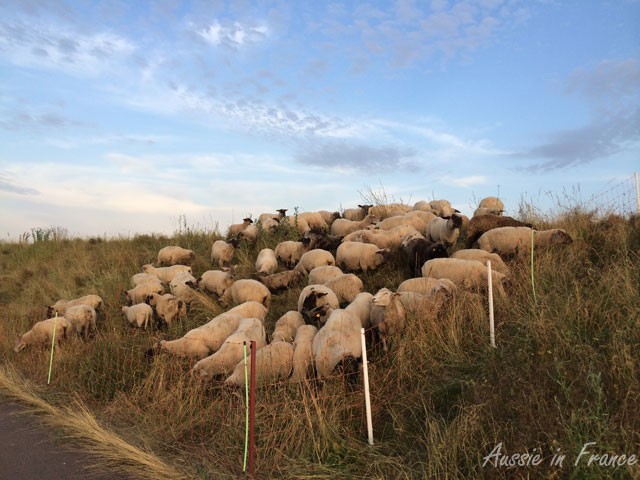 Sheep on the levee

On the way home, I stop to take a photo of the sheep scattered along the levee. Within one minute, they’re all clustered together, baaing at me! By the time we get back to the Black Bear, we are exhausted which explains why yesterday’s post only talked about Torgau.