Cycling in Germany #9 – Country Roads around Niederlommatzsch on the Elbe

We reach Elbklause, our Radhaus (bike hotel), in Niederlommatzsch around 12.30. Our room is new, large and airy with a wonderful view of the Elb. The wifi works immediately and doesn’t require endless codes. We are directly on the bike path. 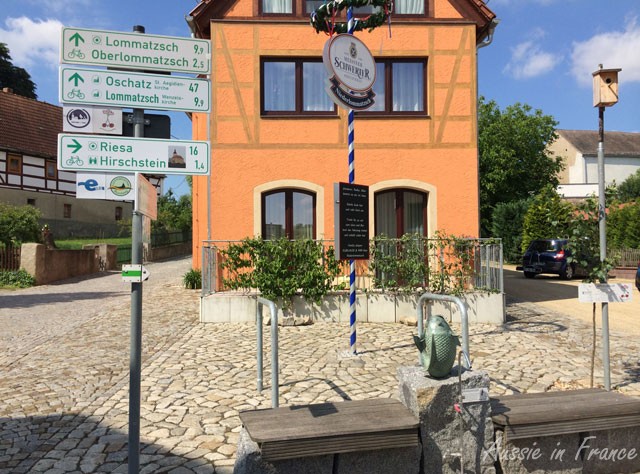 Our bike hotel on the bike path

The hotel’s restaurant on the river looks very inviting. We order two local white wines – a Muller-Thurgau and a goldriesling. We prefer the Muller-Thurgau. I work out from the all-German menu that pork is the local speciality so we order pork cutlets. They are king-size and served with a large variety fresh vegetables – one of the best meals so far. 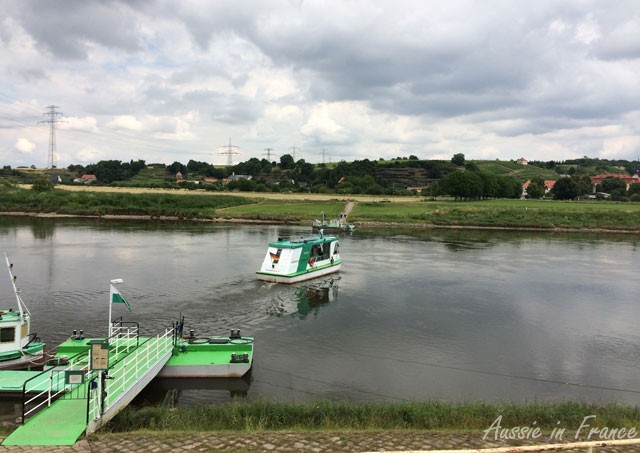 We set off on our bikes for Riesa, theoretically 14 km away but we end up doing 36 km there and back due to a detour. The ferry is just outside our hotel so we begin with the east bank. Having gone for two days without cycling in Dresden has improved my saddle soreness. Good thing because the initial paths are a sort of crazy paving which is even worse than cobblestones. 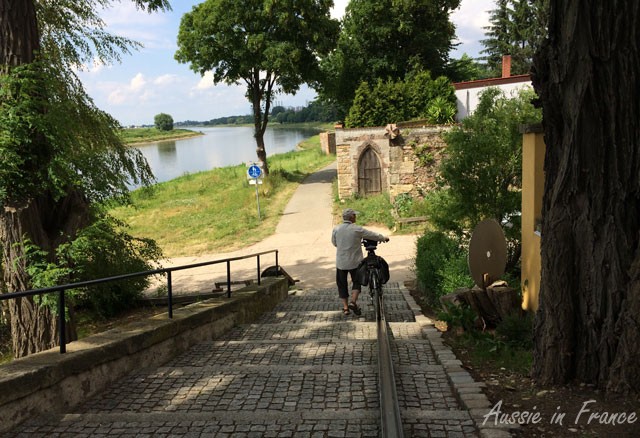 The cobblestones are bad enough but the crazy pavement (not shown here) is worse. Sometimes, we have to take our bikes down a steep slope with a bike runner

The countryside is very tranquil and takes us past back gardens with their own machinery exhibitions, a surprising building that turns out to be a sawmill with a crane, a renovated windmill without sails and an absolutely enormous chemical refinery that employs 1400 people. I find it very colourful – typically German – but Jean Michel explains that the different coloured pipes are compulsory and indicate what they contain. Ah well. You learn something new every day! 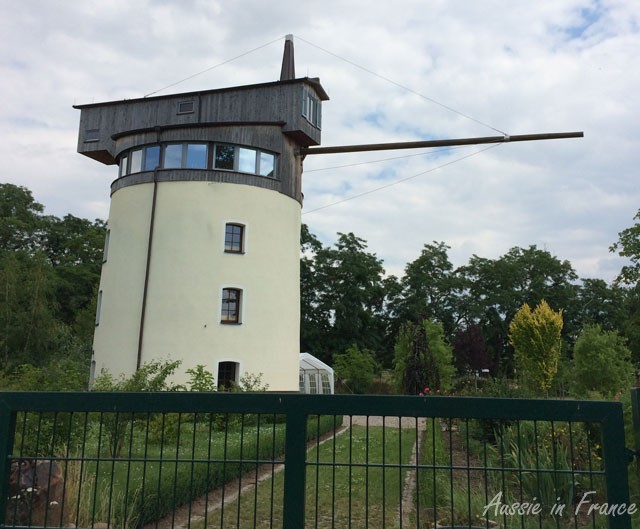 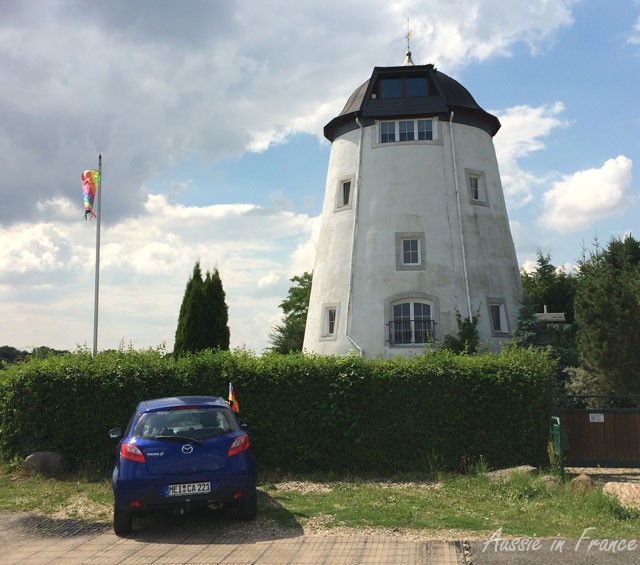 Restored windmill of the Dutch type – note the patriotic car

Riesa, our destination, is obviously a new town that drains the refinery workers and its only redeeming features are the biggest wisteria I have ever seen, the town hall and an amazing blind wall with a music store painted on it. 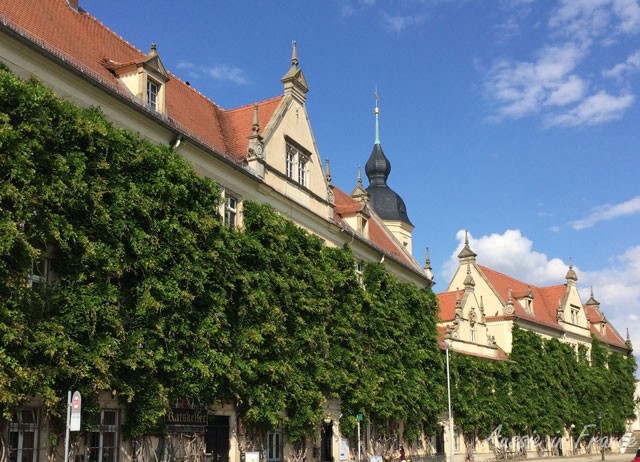 Magnificent wall of wisteria in Riesa 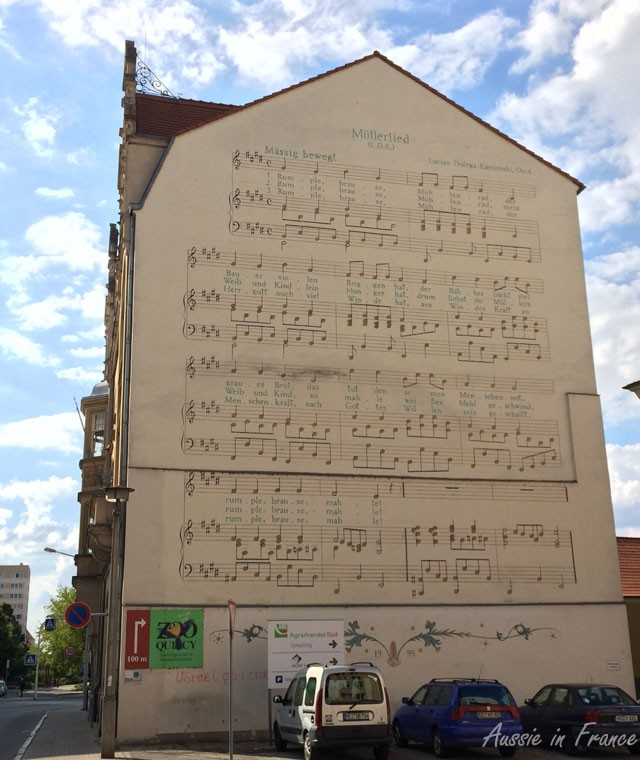 A musical wall in Riesa

We do however find an excellent eiscafé where we manage to order icecream and mineral water in German. The East Germans, who are obviously not used to foreigners, understand my German even less than the Bavarians! I’m amused by the fact that a man stops me in the street and asks in English where the police station is. Jean Michel knows of course so sends him in the right direction. 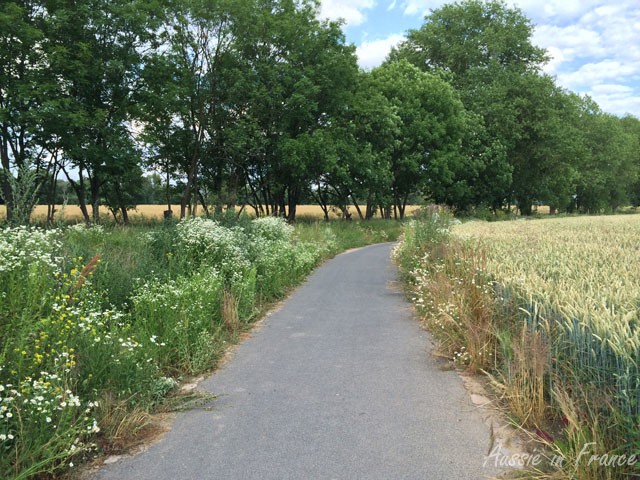 Rape and wheat with wild flowers on both sides

Having crossed the bridge at Riese, we are able to cycle back on the other side of the river, through cultivated fields lined with wild flowers. We see corn, wheat, barley, rye, rape, sunflowers, potatoes, peas, sugarbeet and runner beans, and a few sheep and cows. We also smell numerous pigsties. Also an incredibly long barge. 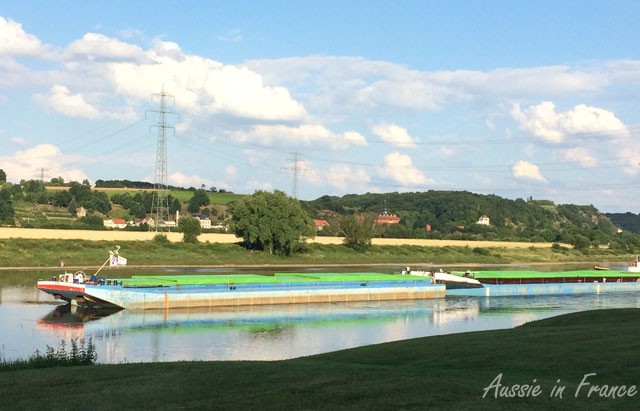 It’s nearly 8 pm when we get back so we finish off the sweet wine we bought in Bad Schandau followed by a cucumber, tomato and cheese salad. We eat the cherries we bought along the way for one euro outside someone’s house. We sink thankfully into bed at 10.30 pm after an unsuccessful attempt to find a hotel for our next stop at Wittenberg. 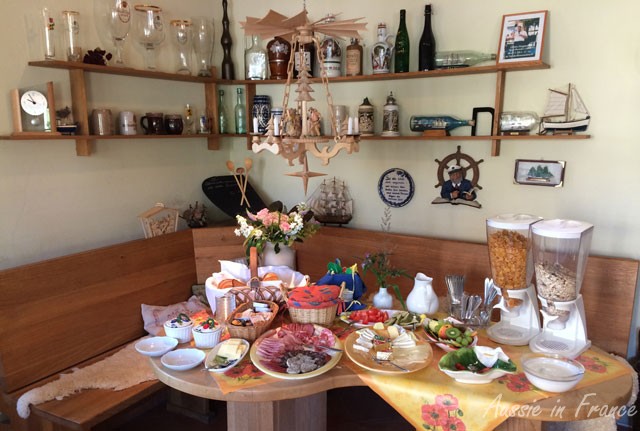 Breakfast at Elbklause, the best yet, according to Jean Michel

It’s next morning and we learn the downside of our river view. The curtains are thin and the windows are facing east which means maximum light from 5 am onwards. There is also a street light outside which seems to stay on all night. So after the best breakfast so far according to Jean Michel (the usual cold meats and cheese but a better selection, boiled eggs, very compact dry bread, cereal, yoghurt, tomato, butter & jam and fresh fruit), we decide to stay at home to catch up on our travel log and blog and deal with such mundane things as washing and repairing Jean Michel’s inner tube. 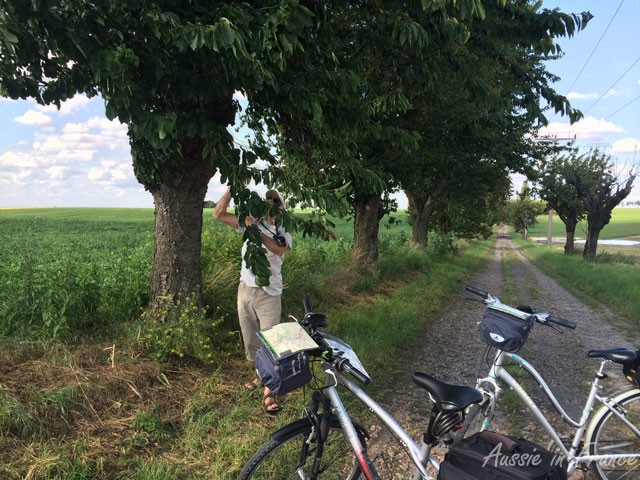 We have lunch again at the hotel restaurant overlooking the Elb. Jean Michel chooses some sort of pork and sauerkraut and I have duck with cooked shredded beetroot which is excellent. We have the Müller-Thurgau again and try the Weissburgunder (white burgundy) but it’s a bit green. 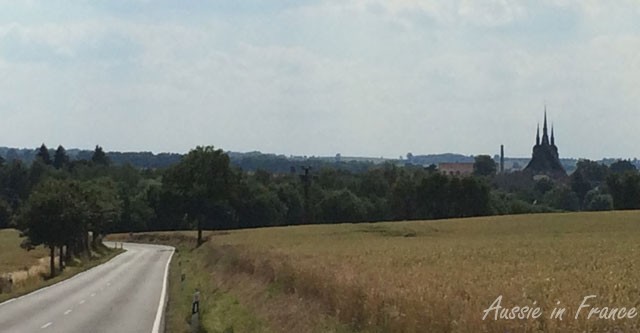 At least there’s a view after that hilltop climb

As we’re keeping Meissen for tomorrow, we choose to go west of the Elb to Lommatzsch. I don’t think I’ve ever climbed so many hills in such a short time. I’m as red as the beetroot I ate at lunch. 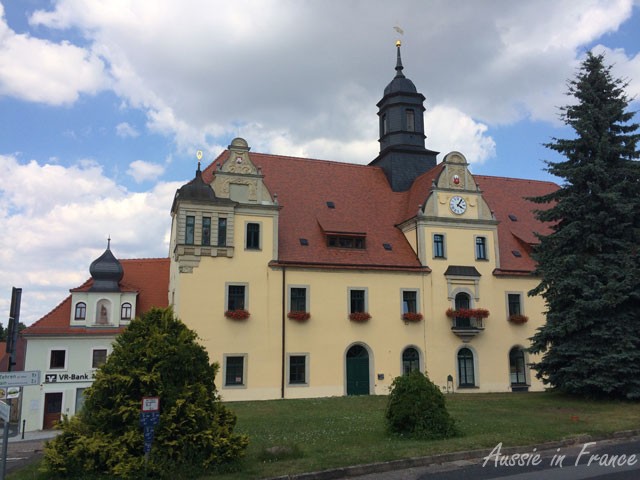 Not much to see in Lommatzsch. The town hall looks exactly the same as the wooden village I had as a child. I feel I deserve the ice-cream at the Konditorei more than other. We’re amused to see that it comes from large containers of Carte d’Or ice-cream.

The ride home after shopping for dinner at Netto is much easier, mainly downhill of course. Jean Michel stops at practically every cherry tree along the way to see if the cherries are edible. He can never resist free food, particularly in the country. All he manages to do is to get stains on his shirt … 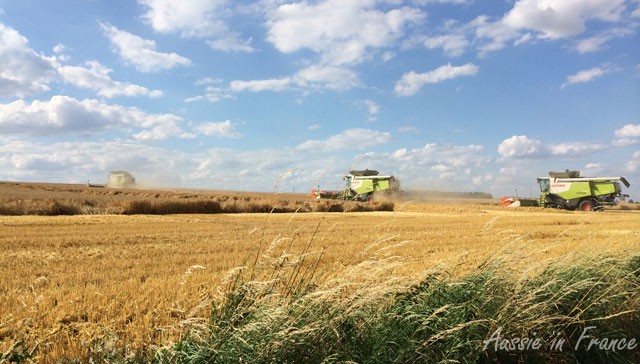 Three combine harvesters all in the same field of barley 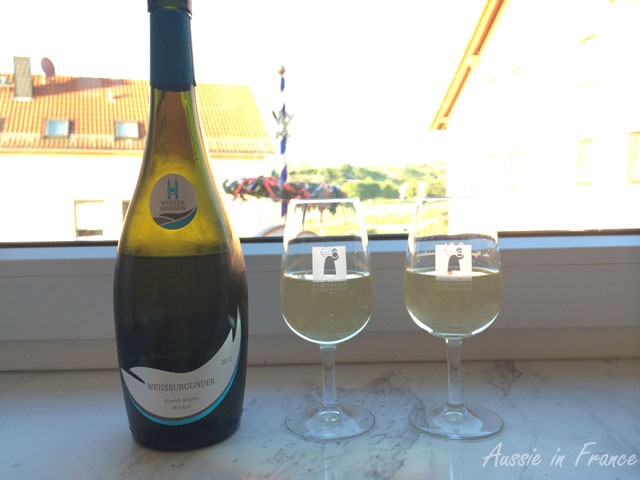 Our Meissen weissburgunder aperitif on the window-sill

For our apertif we try the Winzer Meissen weissburgunder (pinot blanc) we bought in Reise for 11.50 euro the day before in a most unlikely looking shop. It’s much better than the one I had a lunchtime – certainly not as green – but no nose to speak of.