Cycling in Germany #16 – Celle and Bremen

Bad weather has struck so we’ve studied the weather report and after a day of R&R at Kunsthof Pension in Dahrenstedt we’re off to Bremen via Celle which has over 400 timber-framed houses. 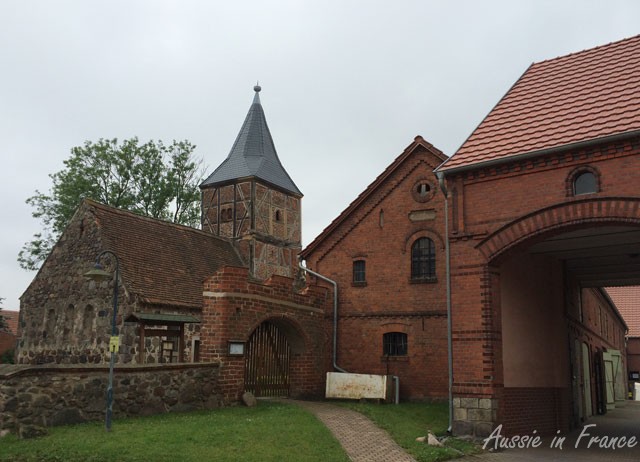 Church and farm building in the little village of Dahrenstedt

We are going back into the former West Germany today and wonder whether it will be noticeable. Nothing could be more flagrant! The houses are different, there are more gardens and trees, more shops in the towns and village. Everything is neat and tidy again, there are no more ruins. However, there is also a small forest with prostitutes’ vans from one end to the other, which is a little worrying. 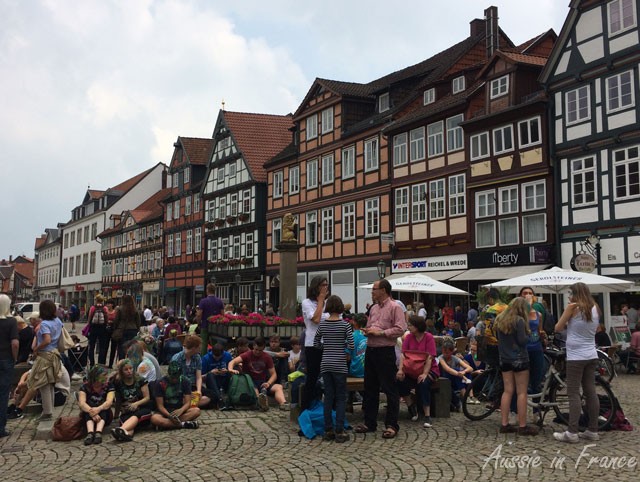 Painted faces and hair in Bremen

The first thing we see when we arrive in Celle are teenagers with colourfully dyed hair and faces. The lady in the tourist office tells me they are celebrating the end of high school. She doesn’t speak enough English to tell me whether it is only a custom in Celle or something that happens throughout Germany. 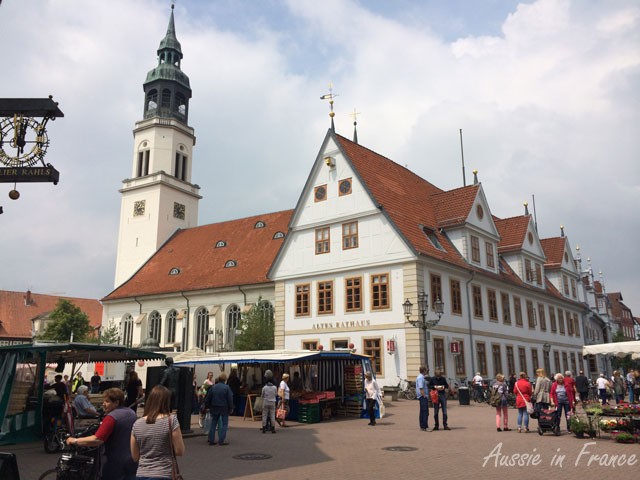 The Rathaus in Celle

Miraculously the grey clouds have made way for the sun so we take lots of photos before lunch just in case it starts raining again. 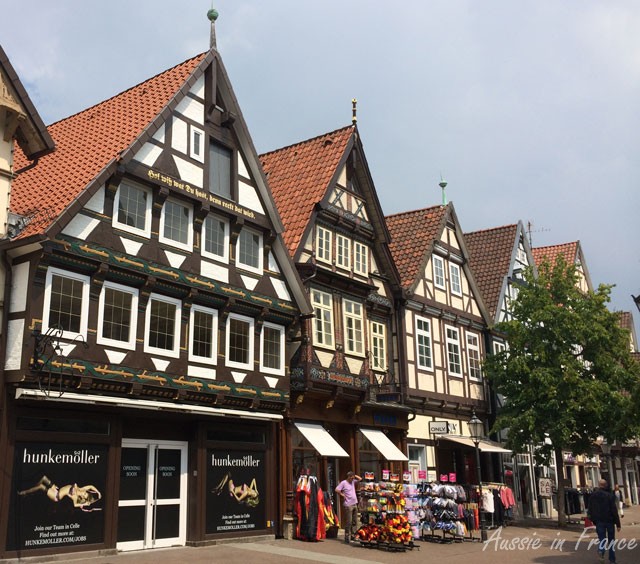 From 1378 to 1705, Celle was the official residence of the Lüneburg branch of the dukes of Brunswick-Lüneburg. In 1534, the Reformation was introduced into Celle. From 1655 to 1705 Celle experienced a cultural boom under Duke George William mainly due to his French wife Eléonore d’Olbreuse who brought fellow Hugenot Christians and Italian architects to Celle. 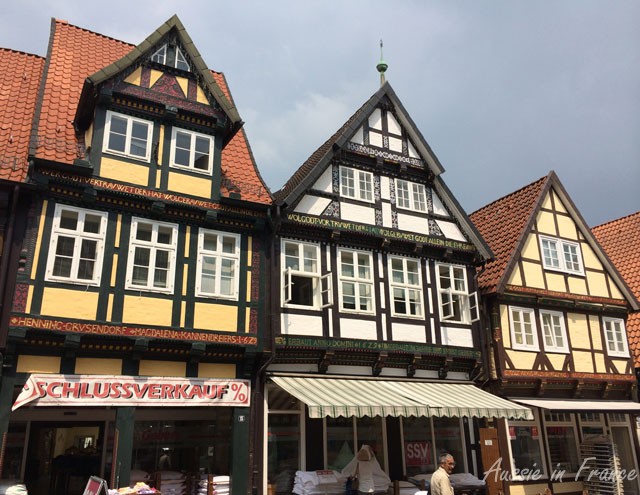 The result is a wonderful collection of colourful timber-framed houses with learned German inscription on them. They are often dated so we set out to find the oldest – 1526 – but it is nowhere to be seen. 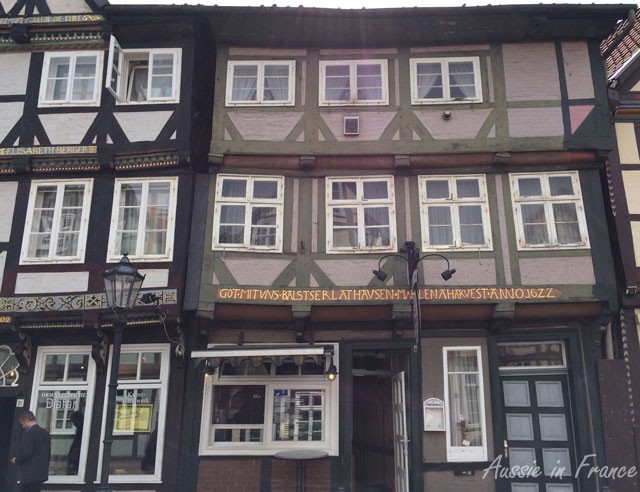 We look for a place to eat and finally settle on the Schweine-Schulze which has a terrace in a shady street and is serving kotelett und pfifferlings. Our trocken weiss wein has just arrived when there is a sudden downpour. Everyone is swept inside and we finish our excellent meal at a rough wooden table. We discover we’re not the only famous people to eat here – Helmut Khol and Gerhard Schröder are also patrons. 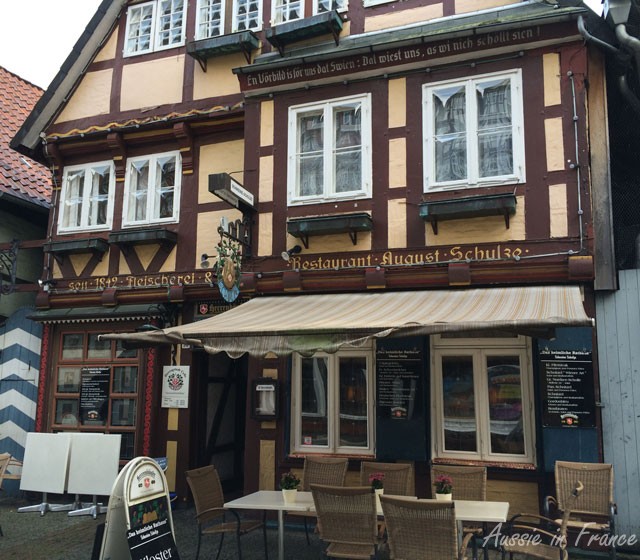 By the time we finish, the sun has come out again so we finish our visit, ending with the French gardens attributed to Eléonore d’Olbreuse. We don’t have time to visit the castle. 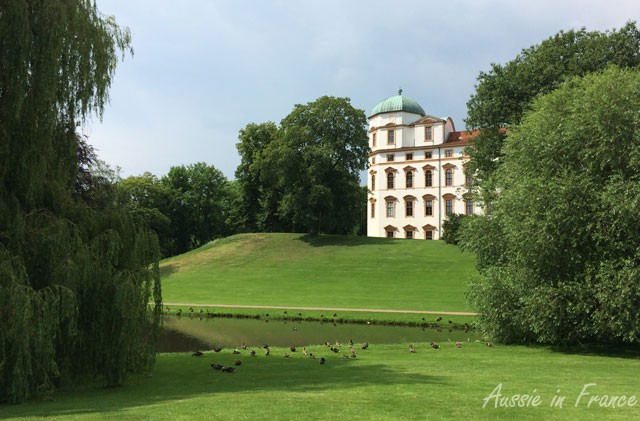 The French garden in Celle with the castle in the background

Bremen is only about an hour away but unbeknown to us, it has been the victim of a violent storm and trees are now covering some of the roads into the city causing an immense traffic jam. 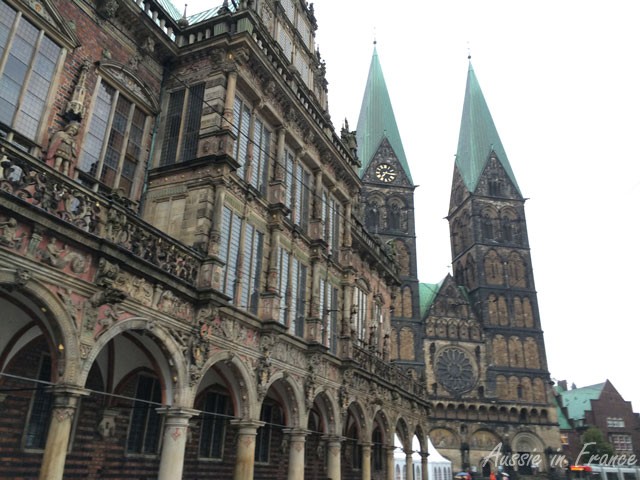 The Rathaus and Cathedral in Bremen, in the Weser Renaissance style

We finally reach the Prizehotel, recommended by Andrea from Rearview Mirror in her post on Bremen, at about 6 pm. It’s an ultra-modern budget hotel, but has everything we need, including friendly, helpful staff, soundproof rooms, excellent wifi, light-blocking curtains and a comfortable bed. It even has decent pillows, which we had stopped expecting in East Germany. 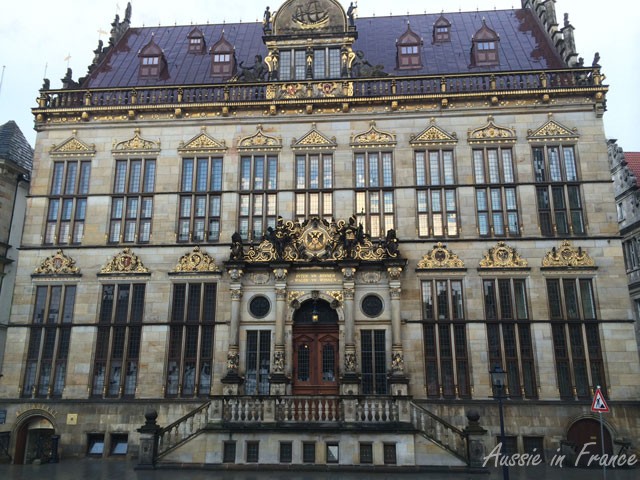 My favourite buildng in Bremen – Schütting, an elegant home built in 1535-37 for the merchants’ guild

We set out to explore the city, which is a short walk away. We reach the tourist office in the train station just as it’s about to close and learn the existence of a Radstation (bike shop) nearby where we’ll be able to buy maps for the next part of our trip in Friesland, the only part of the Germany where it’s going to be fine for the next three days! 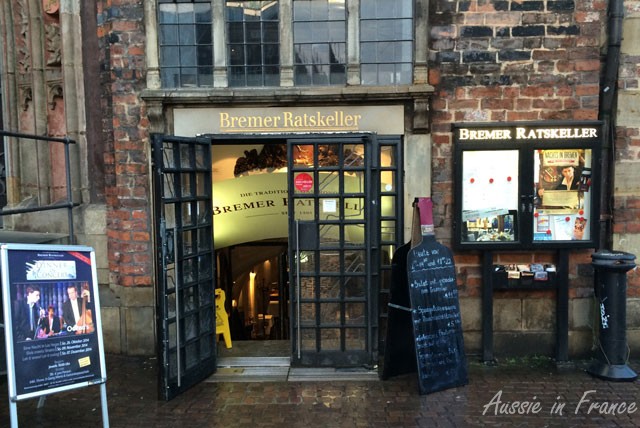 The Ratskeller restaurant in Bremen

It starts raining but we take photos anyway despite the fact that the main square is full of white tents, and look for somewhere to have a drink. I see a sign saying Ratskeller. A ratskeller (meaning council’s cellar) is a bar or restaurant in the basement of the city hall in Germany and you see them everywhere. 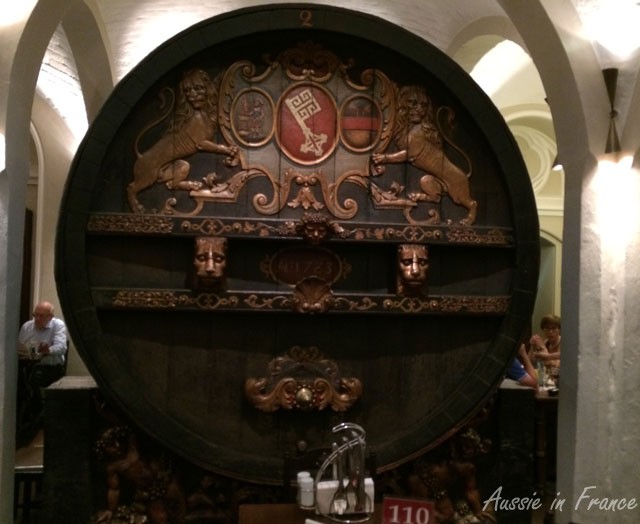 One of the beautiful vats in the Ratskeller in Bremen

It turns out to be one of the places in our tourist brochure and we can see why. Built in 1405, it is one of the oldest wine cellars in Germany with huge wooden vats, each with a different decor. I love the private booths and can imagine the town councillors hatching their plots behind closed doors. 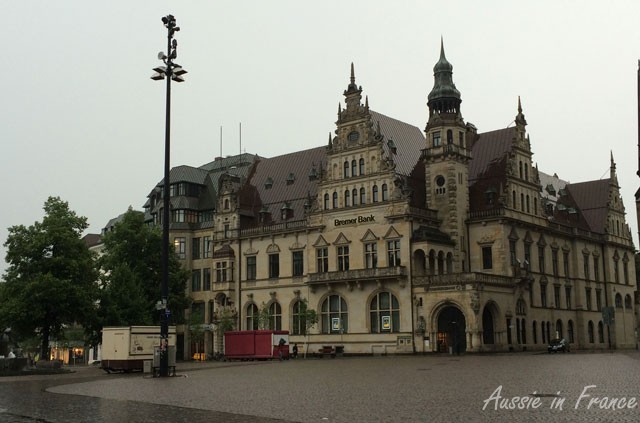 Another Weser Renaissance façade in Bremen

We have a glass of wine each with bruschetta and a dip because we’re not really hungry after our schwein kotelett lunch. That’s one of the great things about Germany – you can order as little or as much as you want. 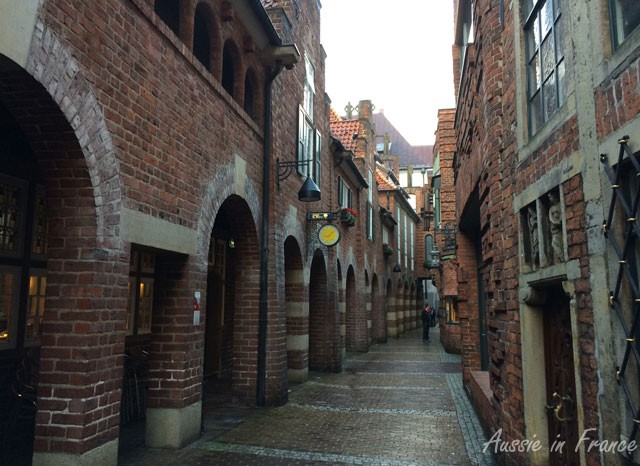 Böttcherstrasse in Bremen with its art nouveau architecture

When we emerge from our cellar, the sky has cleared up completely so we take our photos all over again and go looking for the places we haven’t seen yet, in particular, Böttcherstrasse and the Schnoorvietel. 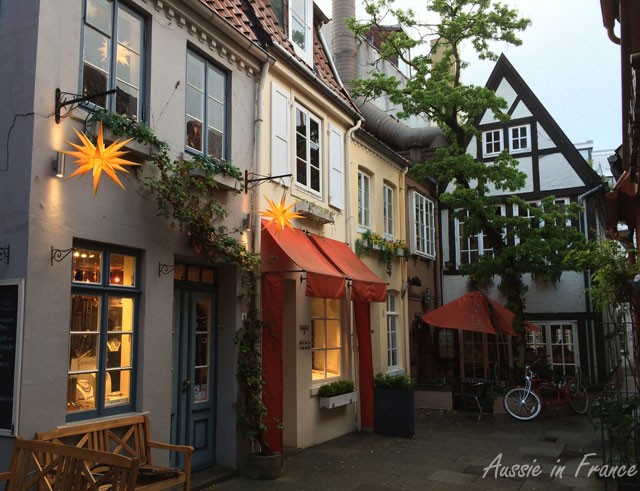 Typical street in the Schnoor district

I love Schnoorvietel which is full of tiny little streets with quaint houses built in the 15th to 17th century for sailors and fishermen. Since it has been raining, there is practically no one around so we have it to ourselves. 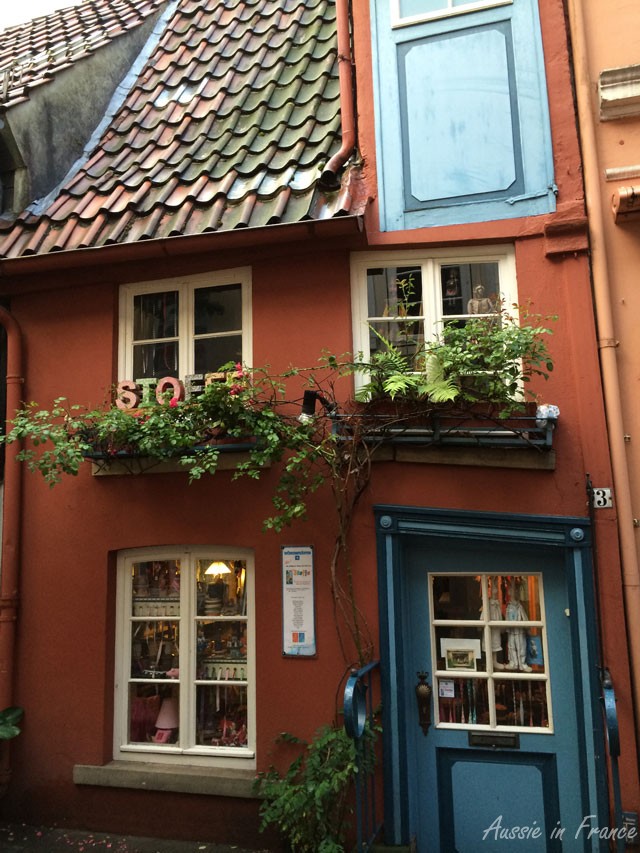 Just as we finish our visit, it starts raining again. We think we’ve done pretty well with the weather today all things considered. 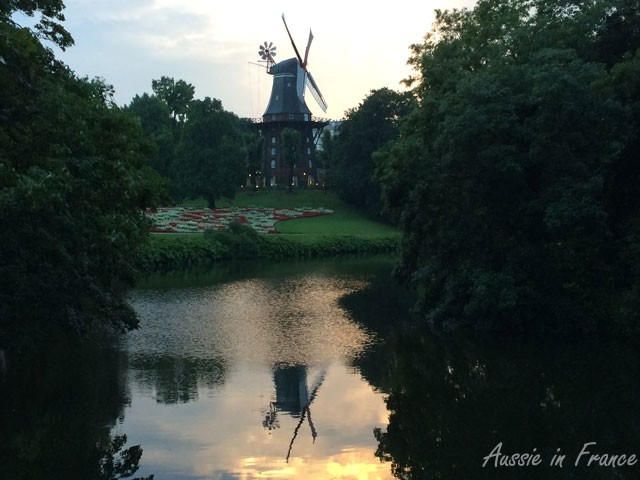 Windmill in Bremen on the way home to our hotel

Tomorrow we’re off to Friesland near the North Sea, land of windmills and dykes, which is the only part of Germany where it’s going to be sunny for the next three days and we can do some more cycling. Hope to see you there!

38 Responses to Cycling in Germany #16 – Celle and Bremen