Cycling in Germany # 3 – Cochem to Zell on the Moselle

Compared with most of the cyclist we saw today – and we saw a lot of them -we are spring chickens! There are a lot of Dutch people and a lot of electric bikes. Considering most of the cycle paths are flat, I don’t imagine it makes a lot of difference. We might be looking into them in another ten years though. 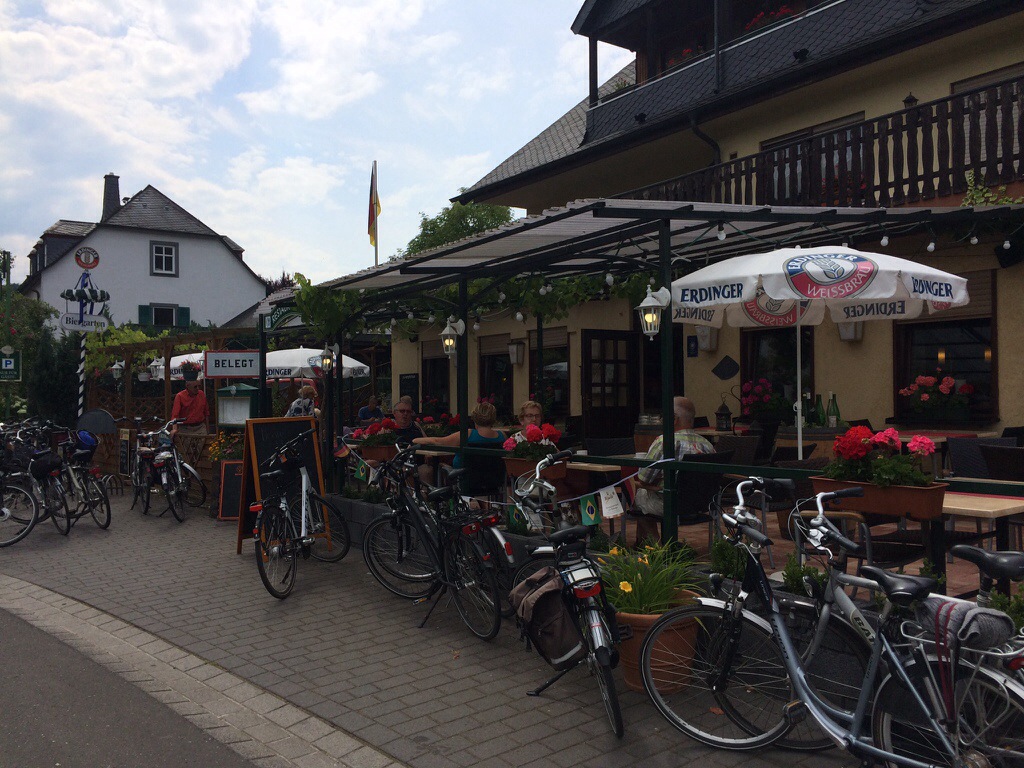 We drove to the pretty little town of Cochem with its hordes of tourists mostly from the many cruise ships that travel up and down the Moselle. We crossed the bridge and joined the very pleasant cycle path on the other side. No trains or busy roads, unlike yesterday on the Rhine. 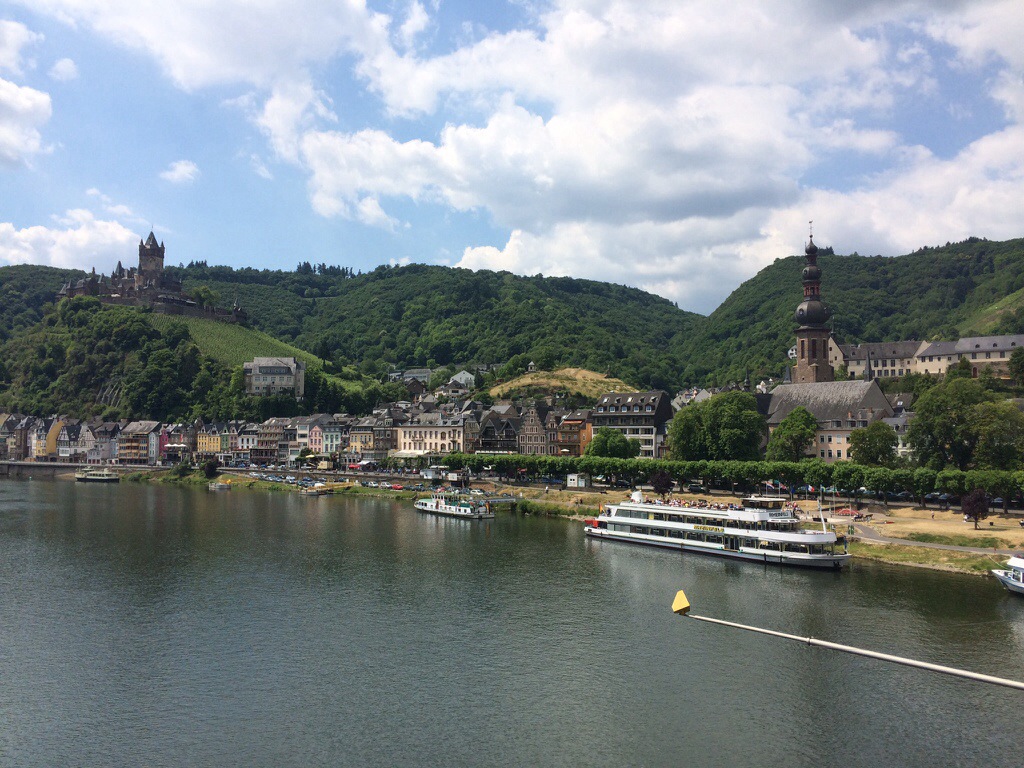 The Moselle which flows through France, Luxembourg and Germany, joins the Rhine at Koblenz. The 45 km section we cycled along today is very meandering and therefore very picturesque with riesling vines growing on steep hills on both sides. 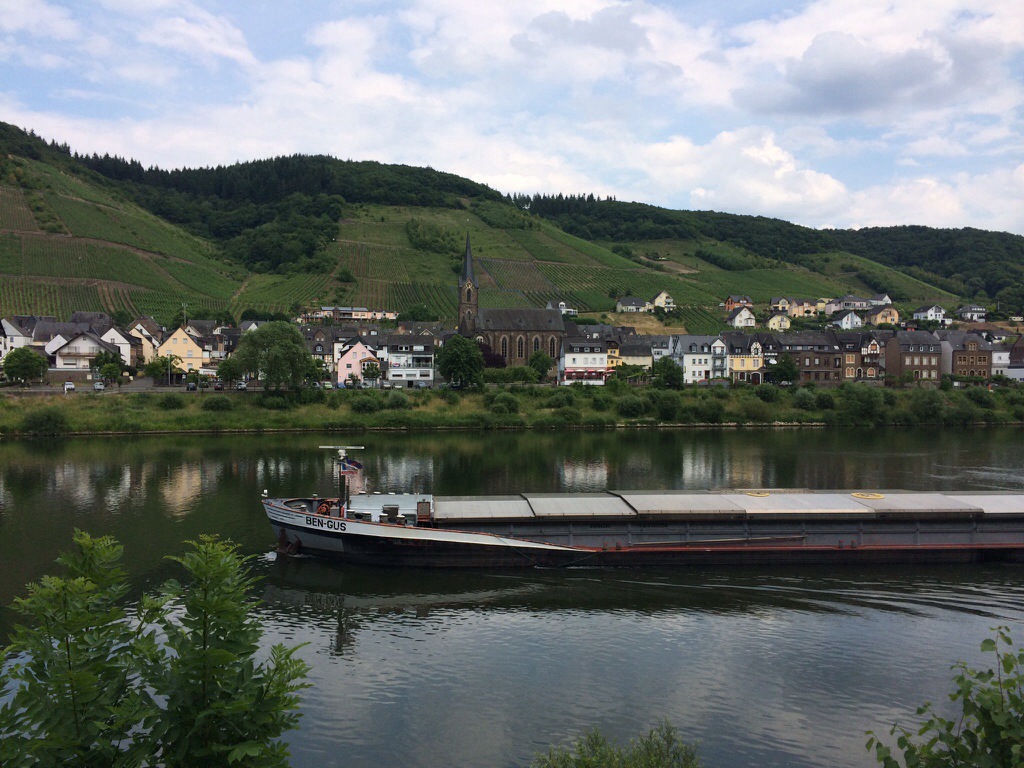 We had lunch in Beilstein, a tiny village with a boat landing that empties large numbers of cyclists and other German day tourists into the street. We found a little Bistrot at the end of the village that looked half deserted and we able to order trocken weiss wein and schollenfilet, only because the waitress brought us an English menu. I don’t know why phone app dictionaries can’t get their act together and add some useful vocab. Whenever I look up something it’s not there. 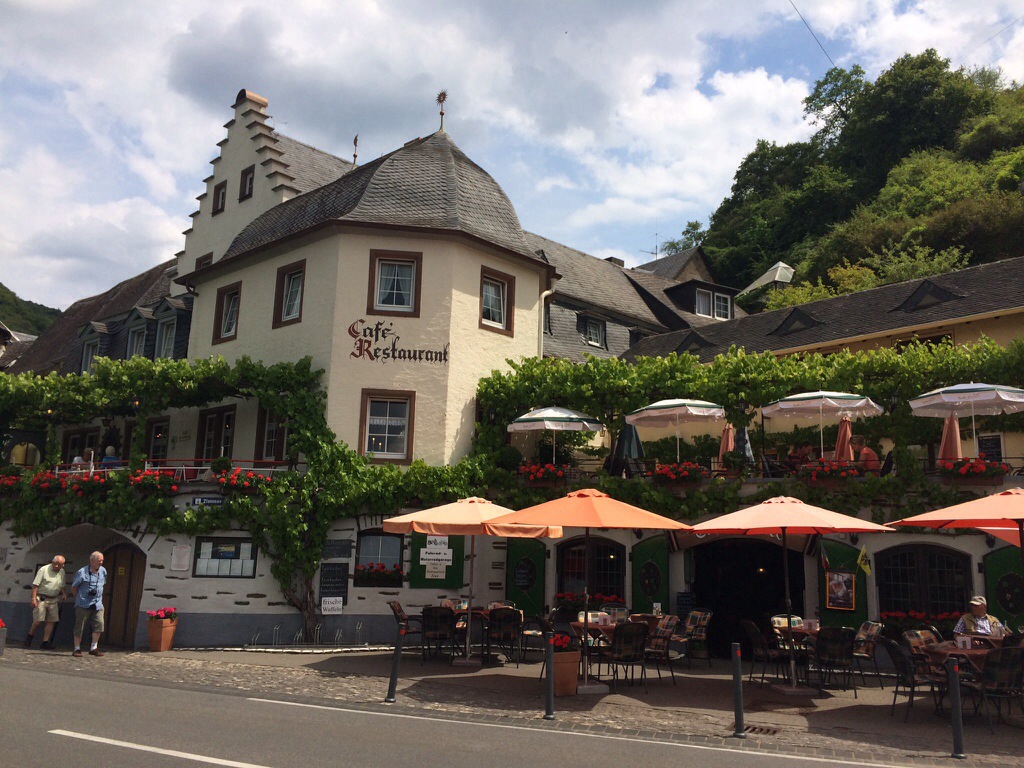 By then we’d only done 12 km and I was saddle sore but we pressed on and were rewarded with more bucolic scenery and pretty little villages. We did stop a couple of times, of course, for things like cappuccino (awful) and eis ( much better). 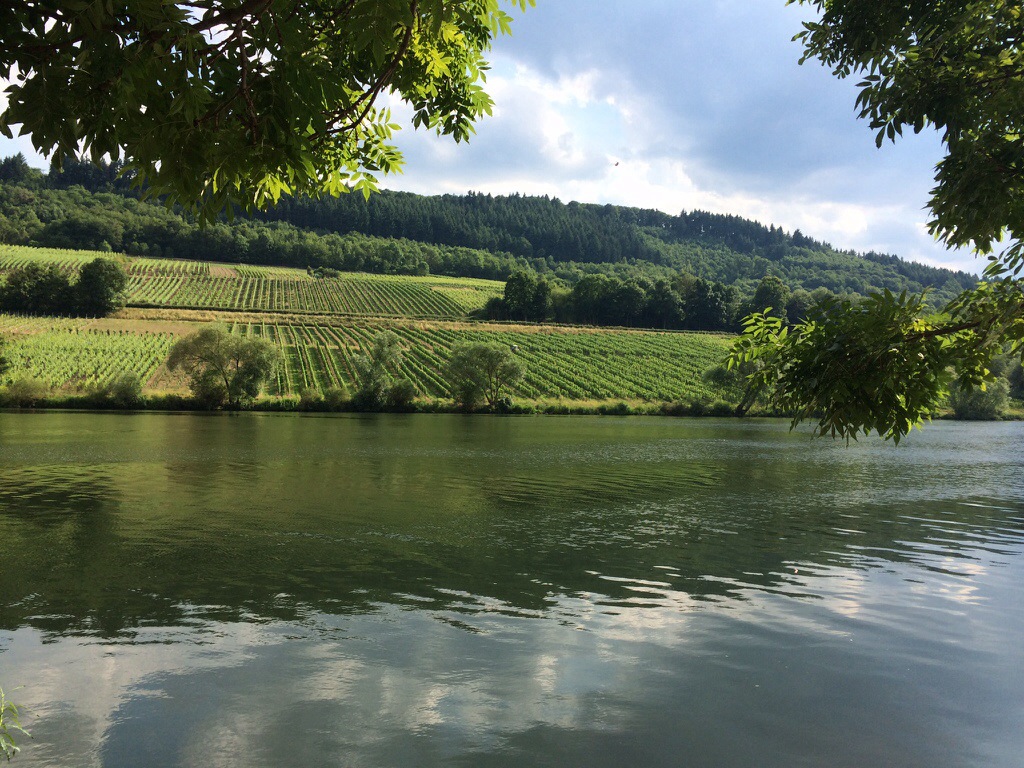 We crossed the river a couple of times, at Senheim and Bullay where there is a double-decker road and rail bridge with no separate lane for bikes. Fortunately everyone was going in the other direction. We should have taken a ferry but it wasn’t clearly marked on our maps. 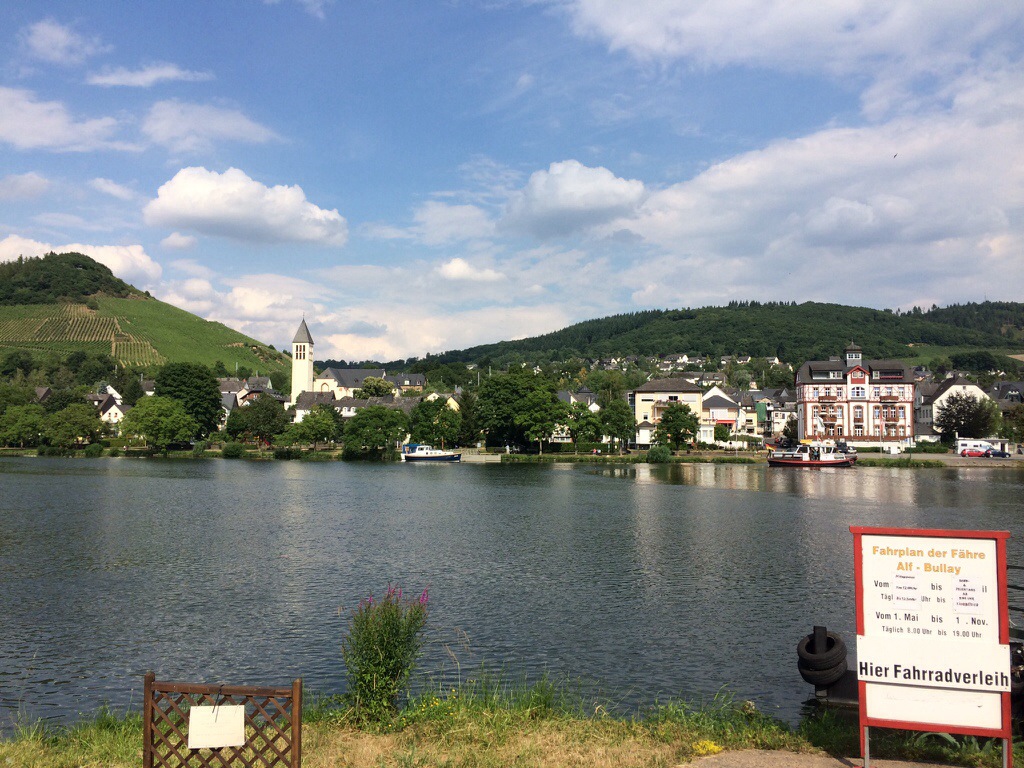 We had intended to go up to a blick (look-out) at Zell but one look at how high up we’d have to climb caused up the change our minds. We turned around and headed back and were dismayed to feel a few large raindrops. In my optimism ( and lured on by the weather forecast) I had not taken our rain capes. It was short-lived however and we made it to the train station in Bullay without getting soaked. A fifteen minute ride took us back to the unusual Renaissance Revival turn-of-the century train station at Cochem where we started from. 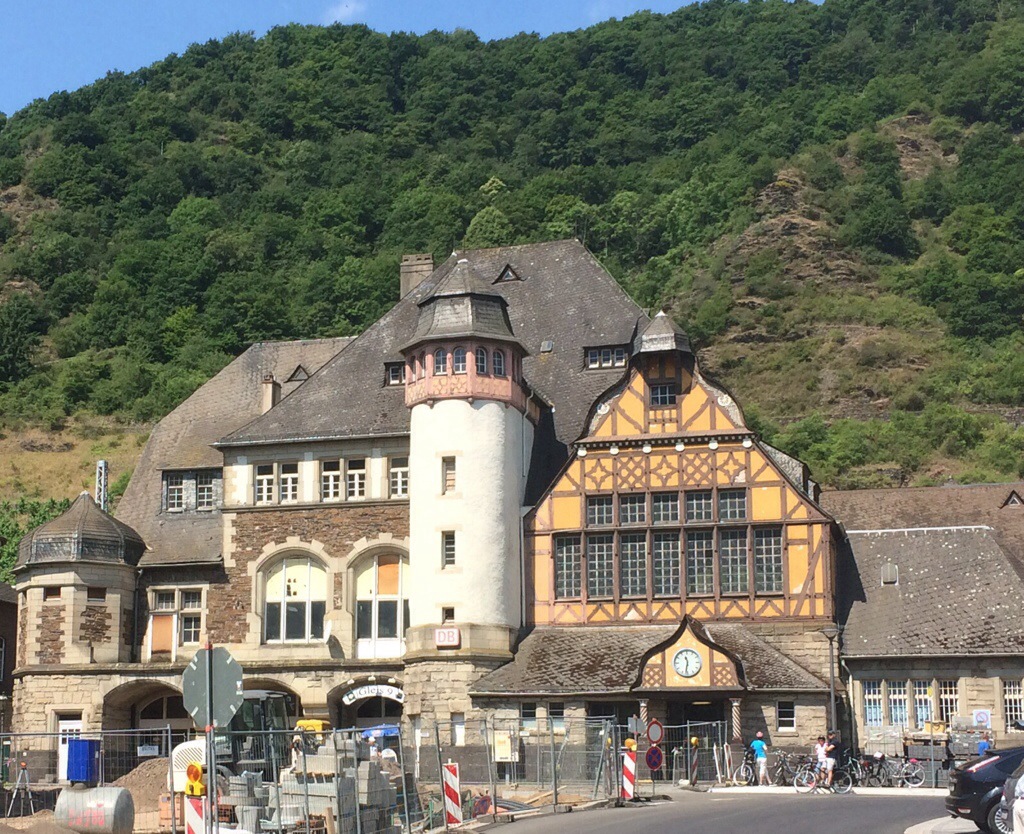 On the way home to Kobern-Kondorf we visited the little village of Tries-Karden whose oldest house was built in 1562 only 20 years before ours! 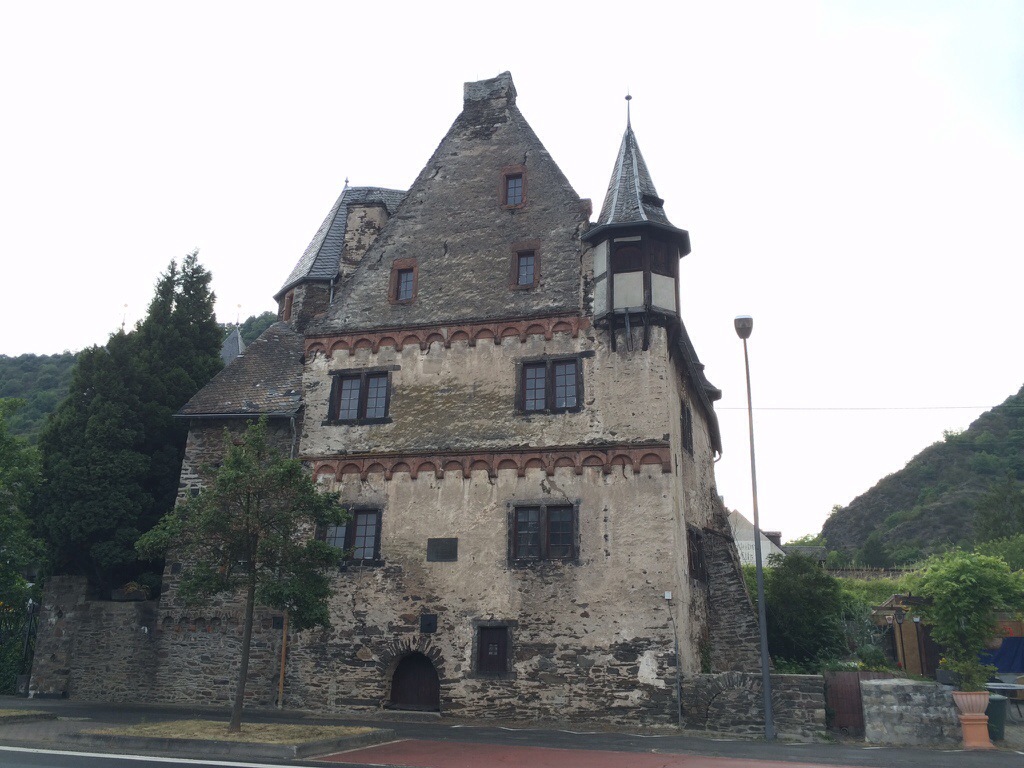 This entry was posted in Cycling, Germany, Sightseeing, Uncategorized and tagged beilstein, cochem, cycling along the moselle. Bookmark the permalink.