Cycling in Germany #4 – Koblenz where the Moselle meets the Rhine

We’re off to a late but chilly start today. After we leave the car a few kilometers out of Koblenz to avoid the usual large town parking problems, we both put on our windcheaters and don’t take them off for the rest of the day. This time I didn’t forget our rain capes … 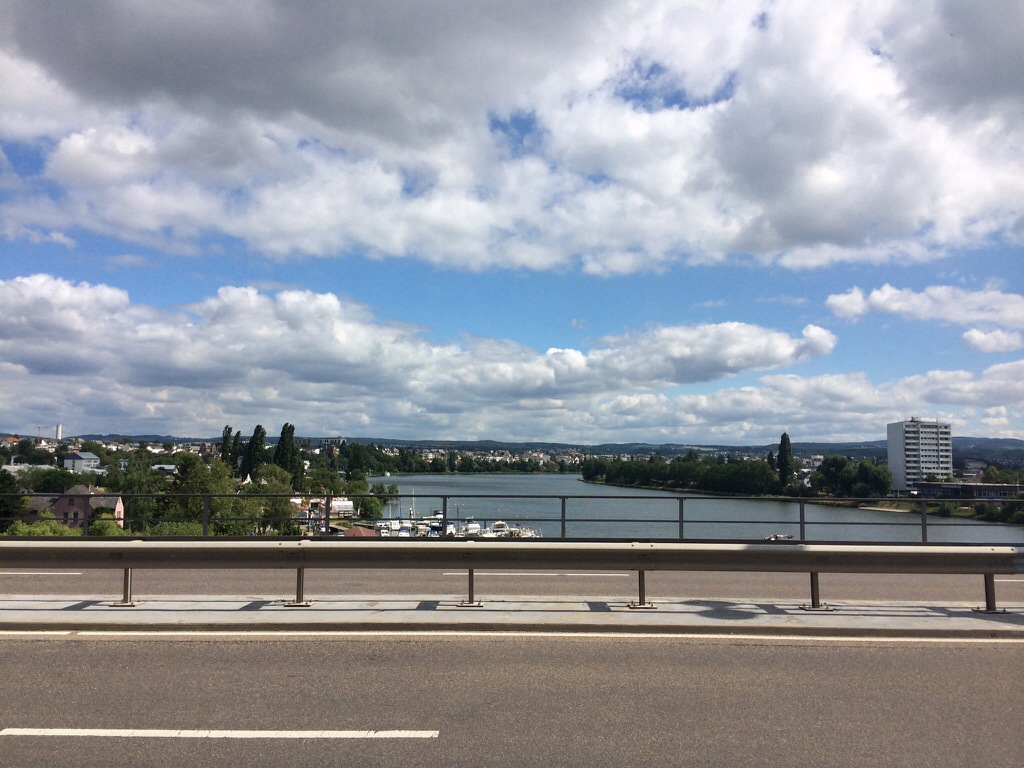 As we cycle over the bridge over the Moselle and get our first view of Koblenz we remember why we try to avoid cities! It’s big and noisy and full of cars. We also know that the old town was completely destroyed during the war and there isn’t much to see. The name Koblenz means confluence and this is where the Moselle joins the Rhine on its way through Germany so the big attraction is the Deutsches Eck or German Corner. 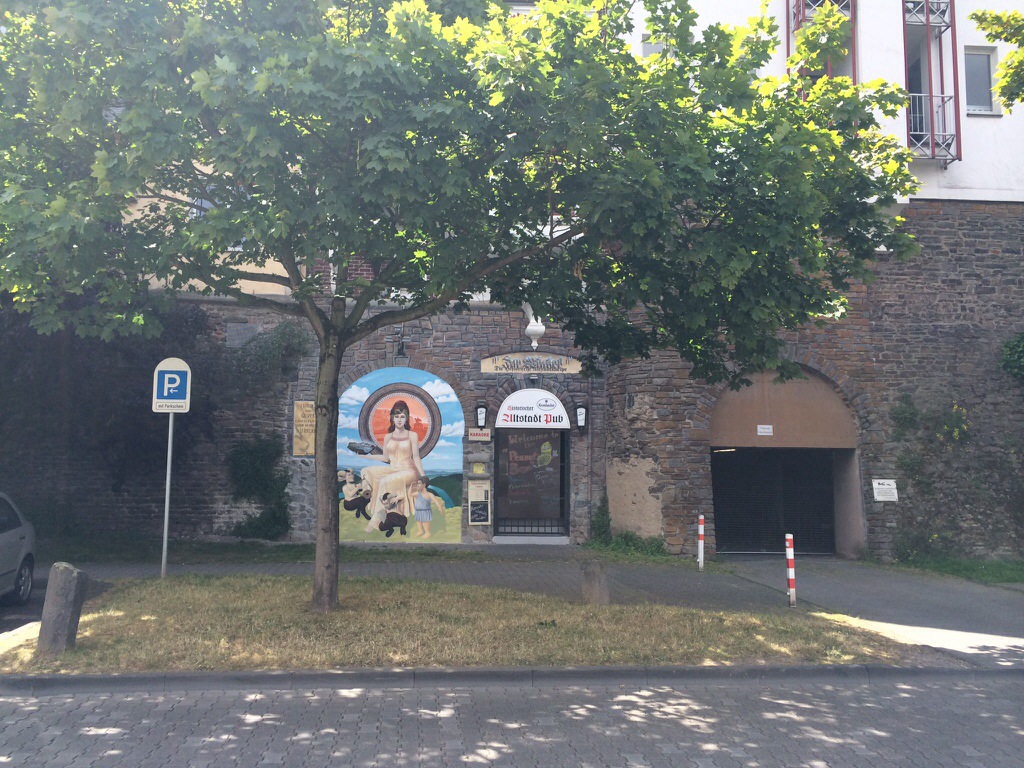 Along the way we see some amusing facades such as the night club above. Jean Michel who’s fallen a little behind catches me up, “you missed something back there” he says so I ride back. I look up and burst out laughing. 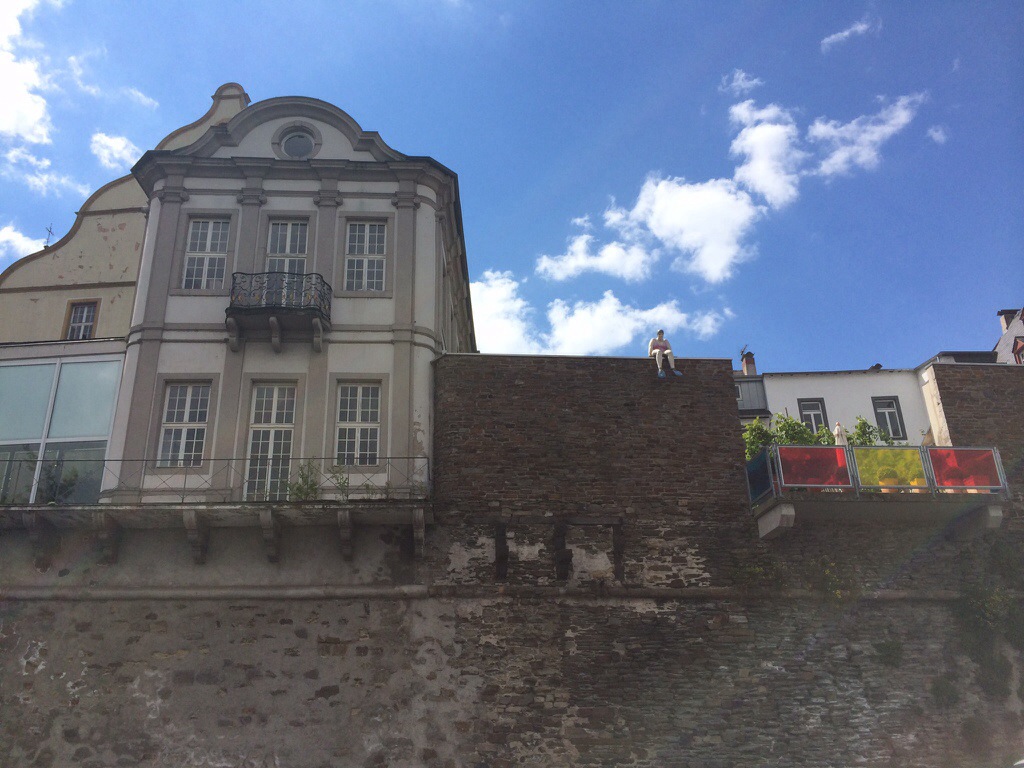 We keep going towards the Eck, passing lots of cruise boats, one of which has walking frames lined up on the quay! “There but for the grace of God” as my mother used to say. The best view of the confluence is from the huge monument to Kaiser Wilhelmina I erected in 1897. The equestrian statue was destroyed in 1945 just before the end of the war and rebuilt in 1993. We think the flags are regional. 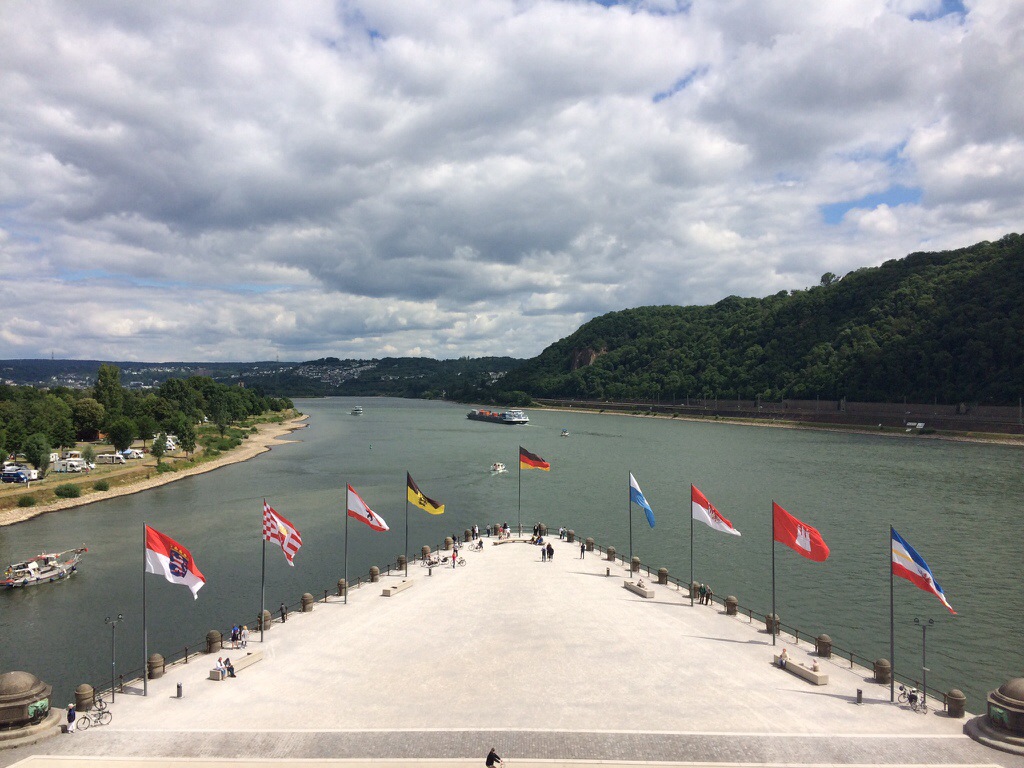 We follow the beautiful Rhine Promenades past some lovely late 19th century homes and some surprising modern buildings. 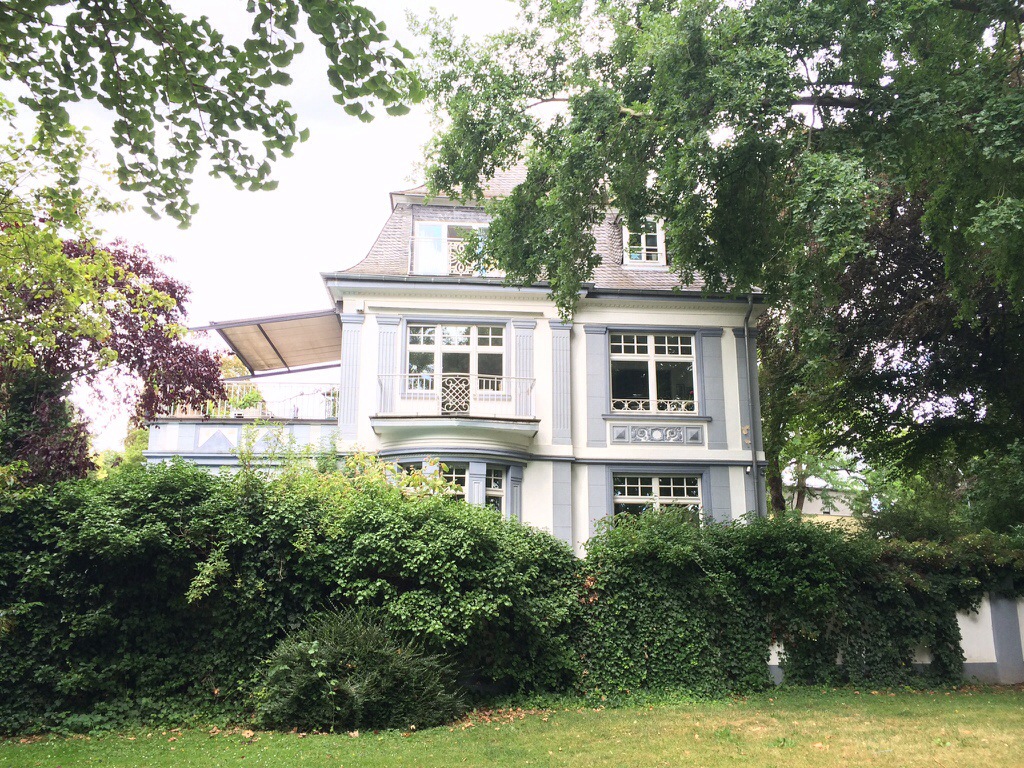 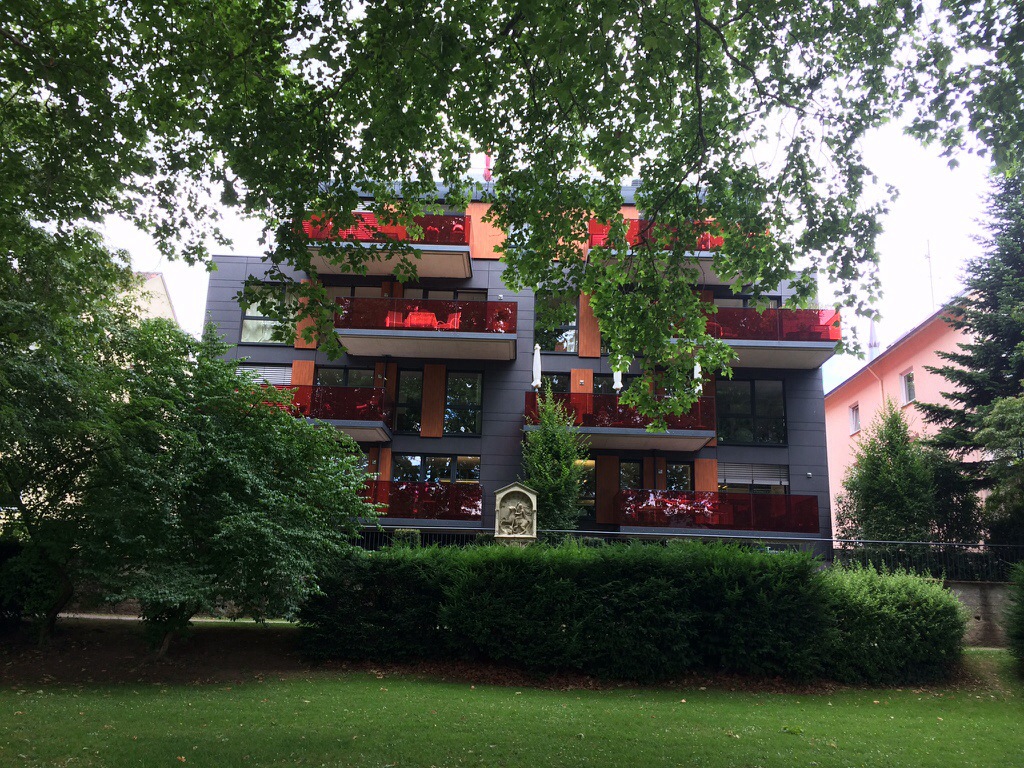 Eventually we find ourselves on the outskirts of Koblenz and are getting hungry. We decide not to eat at a Biergarten obviously set up for World Cup enthusiasts. I bet it’s popular at night. 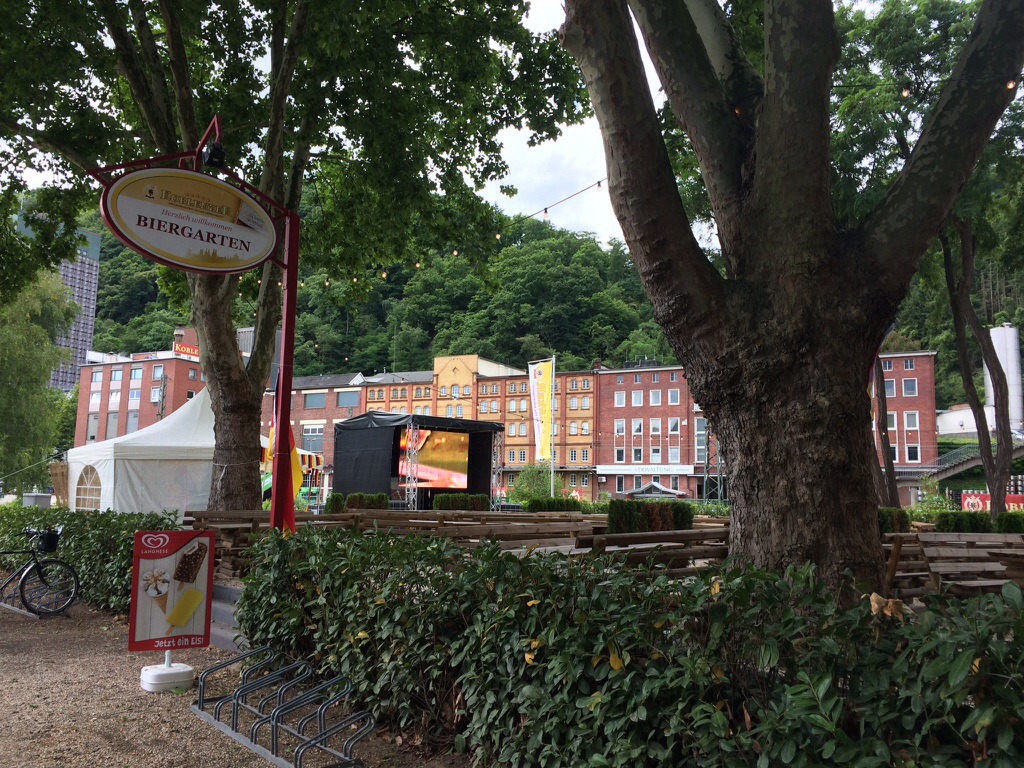 Our bike path lies between the Rhine and a railway line and takes us past Stolzenfels Castle built in 1250 and destroyed during the Nine Years War in 1689. It was restored in 1838 by Crown Prince Friedrich Wilhelm which explains why it’s not made of granite like all the other hilltop castles in the area. I accidentally put my new iPhone 5S on black and white so the photo isn’t quite what I expect. 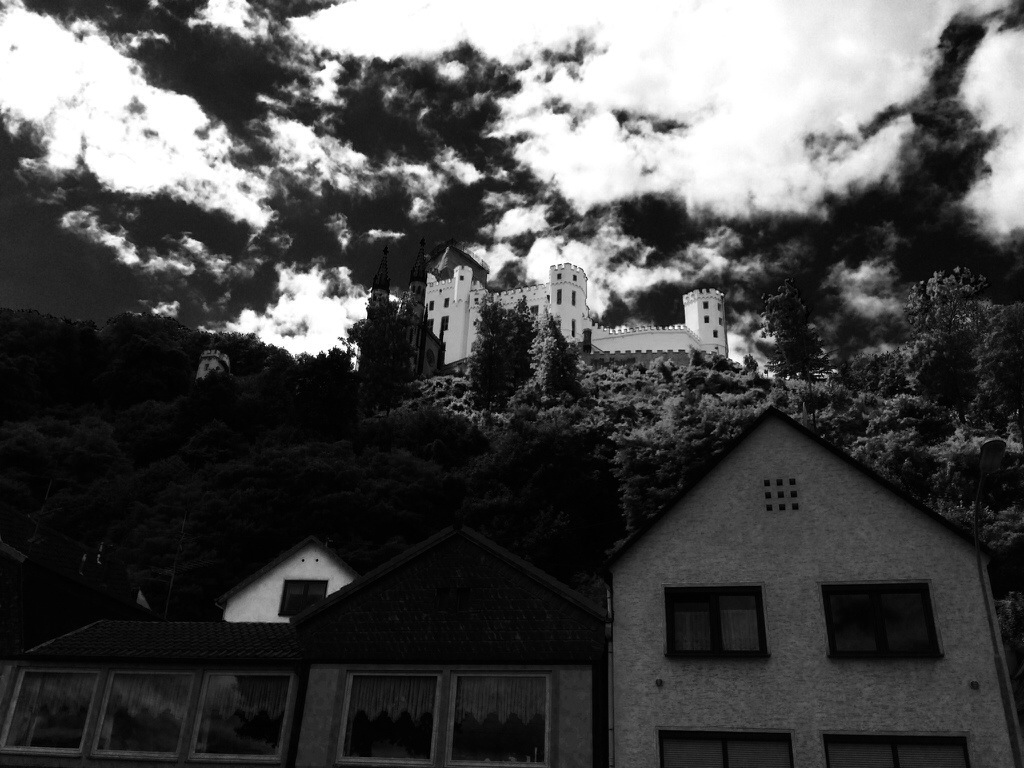 There are no places to eat near the castle so we push onto the next town called Rhens. By the time we arrive it’s 1.30 but in Germany you can get a meal at any time, we have discovered. We see an inviting Biergarten and choose a riverside table. Below is the view from the Ladies! 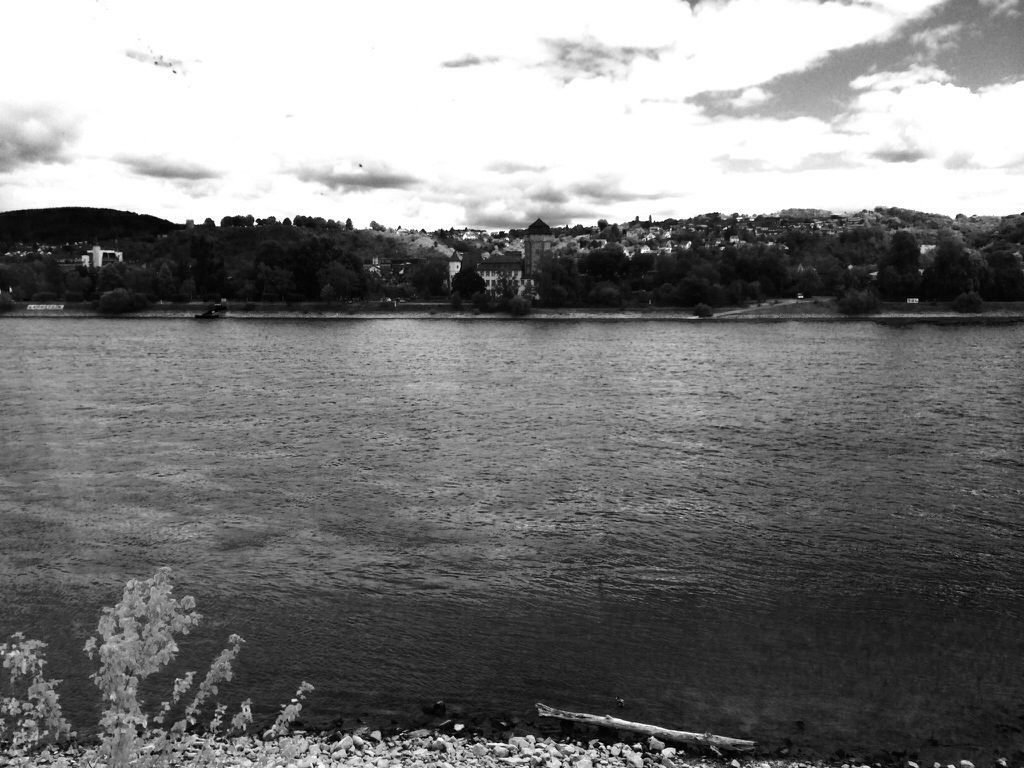 However it turns out to be too cold so we eat inside the restaurant which is across the road. Note that I’m still in black and white mode. 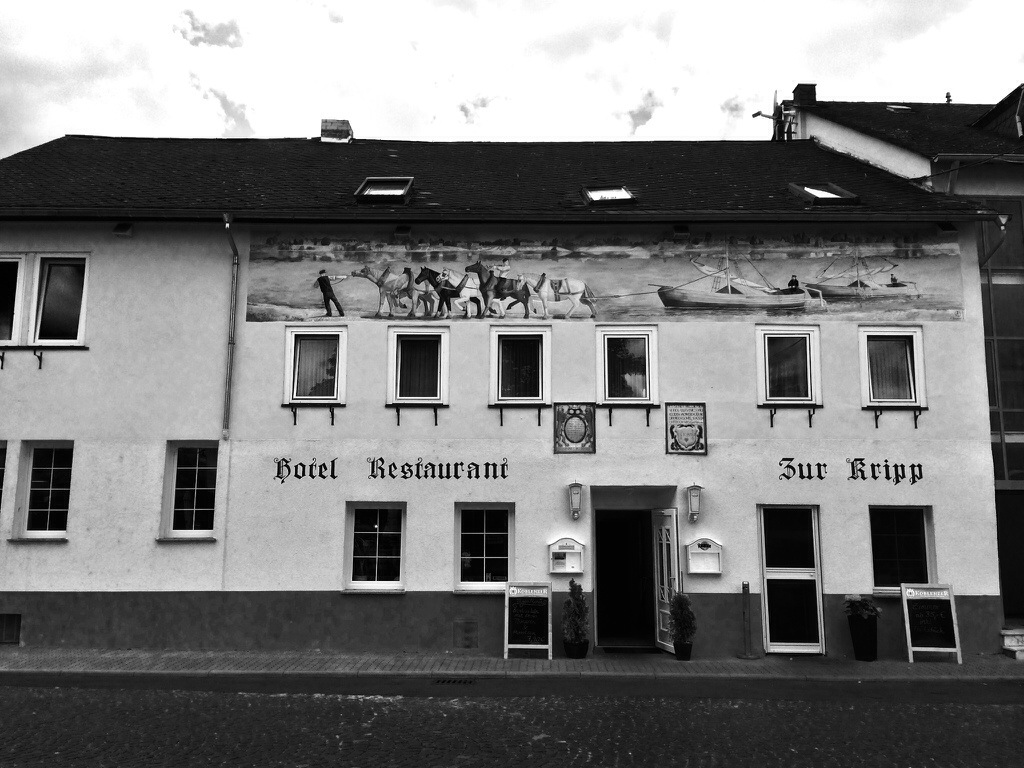 During lunch where we order the inevitable Wiener schnitzel and chips (it’s that or pizza) with a side salad and trocken riesling, we’re entertained by a little boy on a trike without pedals and his older sister who comes through occasionally playing Jingle Bells on a whistle and softly hitting a drum. 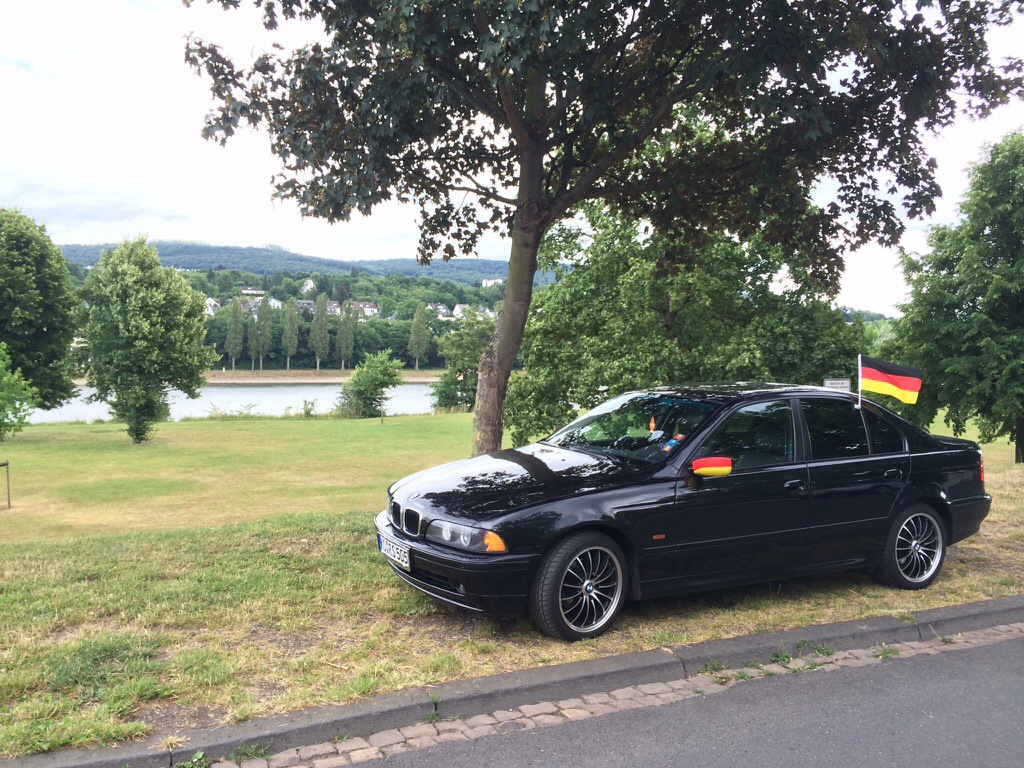 We decide it’s not warm enough to cycle any further down the river and head back towards Koblenz. I finally get a photo of a patriotic car with no owner around. Check out the rear view mirror! Good thing I’ve worked out how to take colour photos again. 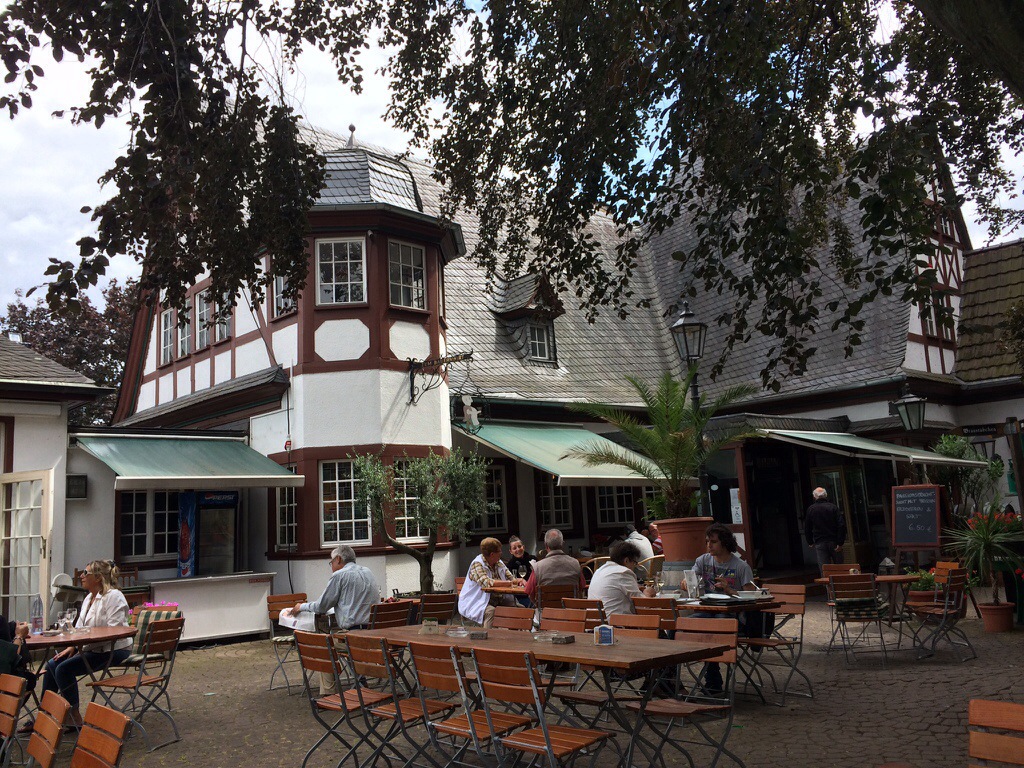 We find another Biergarten in Koblenz but are told we have to go inside the restaurant for coffee so we keep going. Good thing we did because we accidentally found a local institution – the Weindorf. Created in 1925 for the Reich German wine exhibition, this “wine village” is the perfect place to have a glass of wine or real cappuccino. 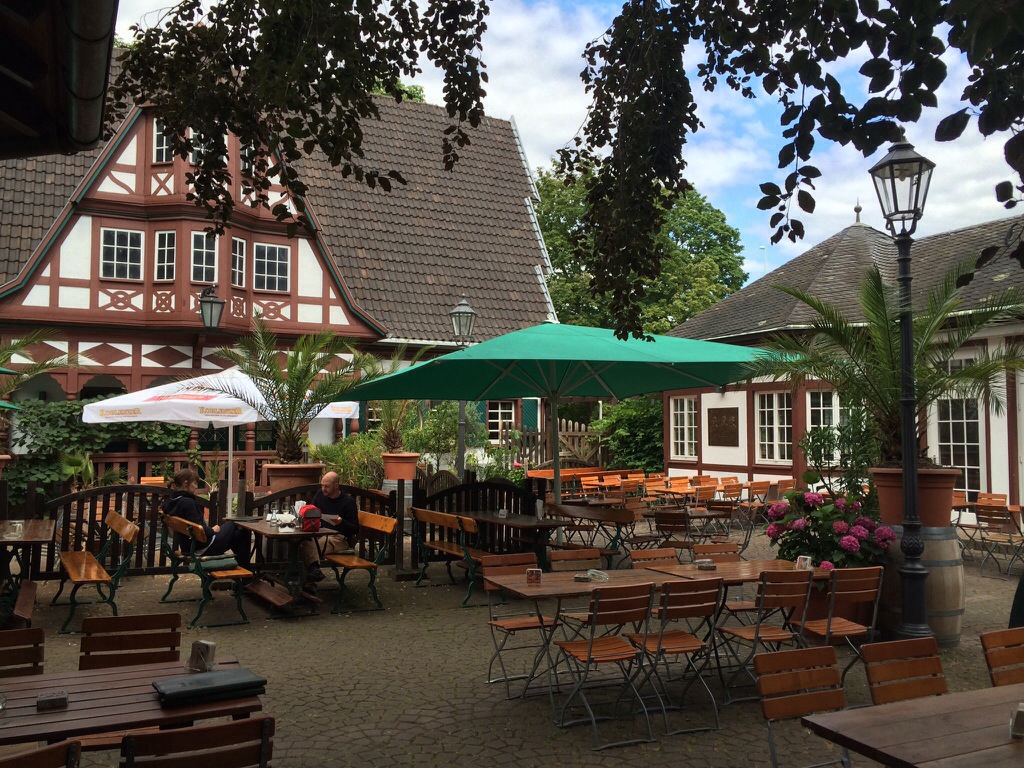 As we haven’t had dessert, jean Michel thinks we should try the cakes. I can definitely recommend the apfel strudel … Not to worry, it’s an intermittent fast day tomorrow. 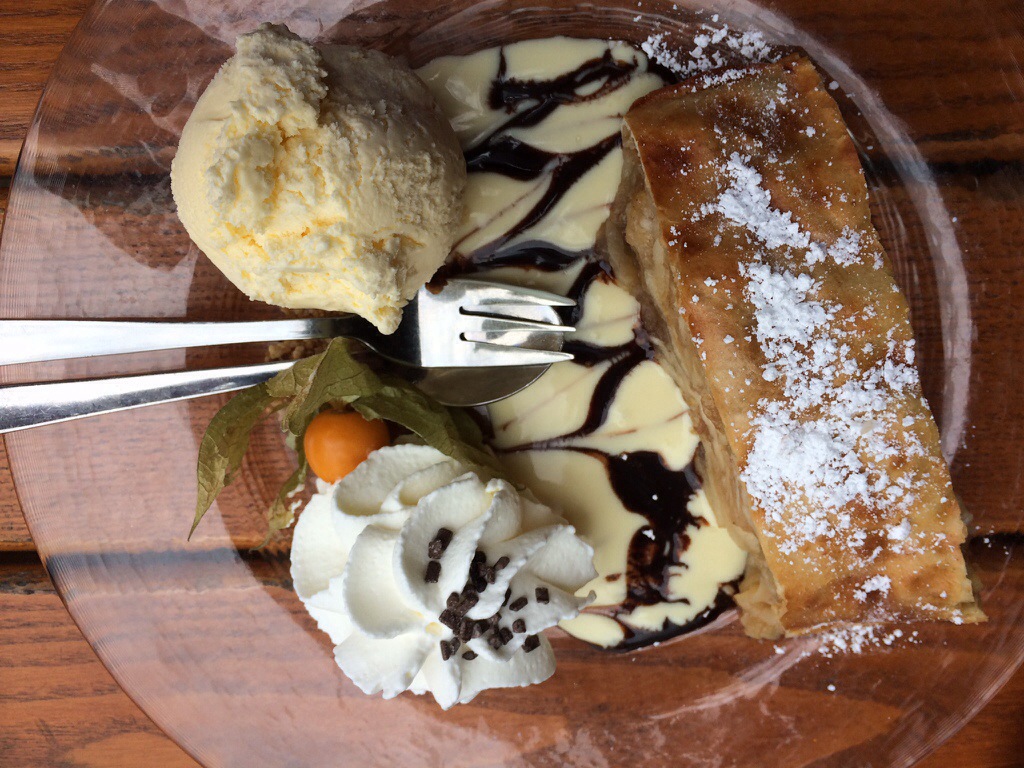 By the time we get back to the car, we’ve cycled 34 km which is kinder than yesterday’s 49! Tomorrow we leave Kobern-Gondorf for the Elbe and Swiss Saxony, about 570 km east of here. And I’m hoping for a proper wifi connection so I can use my laptop again! See you there.