Cycling on the Danube – Sigmaringen to Beuron

We wake up to another brilliant blue sky and by the time we’ve finished breakfast, it’s already 25°C. We decide to drive to Sigmaringen, about 20 K away and get ourselves a proper cycling map since ours isn’t detailed enough. 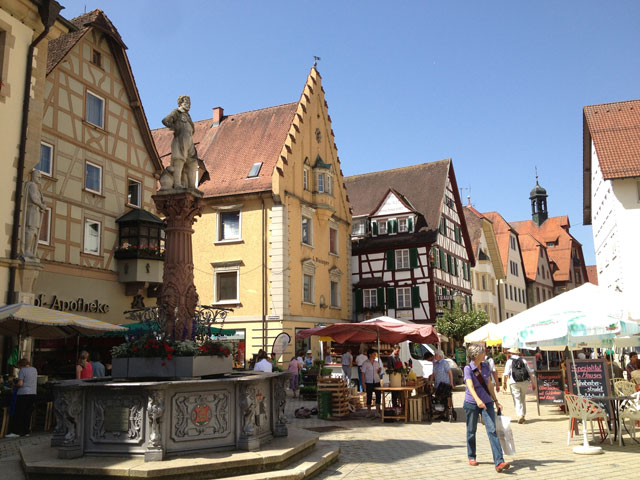 After paying 20 centimes for one hour’s parking (you wonder why they bother!) we wander through the quaint animated streets looking for the tourist bureau. The only thing they have is a not-very-detailed map of all the cycling routes in this part of Germany (Baden Württemberg). We regret not having ordered the Eurovelo 6 on the internet but we didn’t get our act together in time. 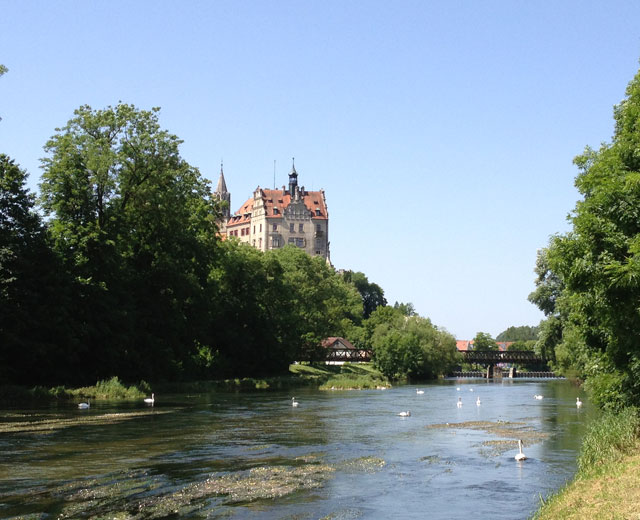 We find ourselves a place to park near the cycle path and set out for Beuron, only to discover, after taking a multitude of photos of the schloss (castle), with and without swans, that a flower festival is temporarily occupying the banks of the Danube in Sigmaringen. So we ride along the main road for a while. 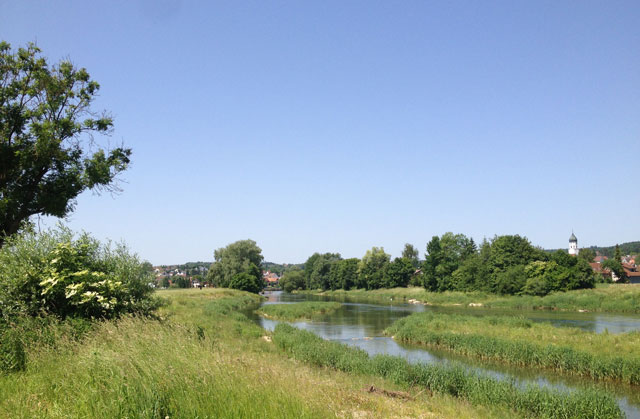 We finally catch up with the bike path on the outskirts and start to enjoy the beautiful scenery along the river. The temperature keeps rising but we don’t notice it while the path is flat because you always stir up your own little breeze when cycling. 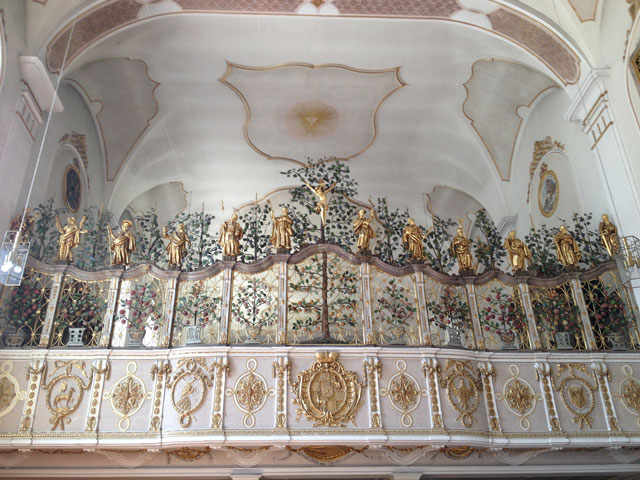 When the road begins to climb however, we start noticing it! As cliffs start to form on either side, the path gets steeper and steeper. By the end, we are walking our bikes up and dripping with sweat. At the top, in the little village of Enzigkofun, we see a church with a white bulb and go inside to get cool off. We are rewarded with an amazing baroque gallery with the twelve apostles on either side of a crucifixion. 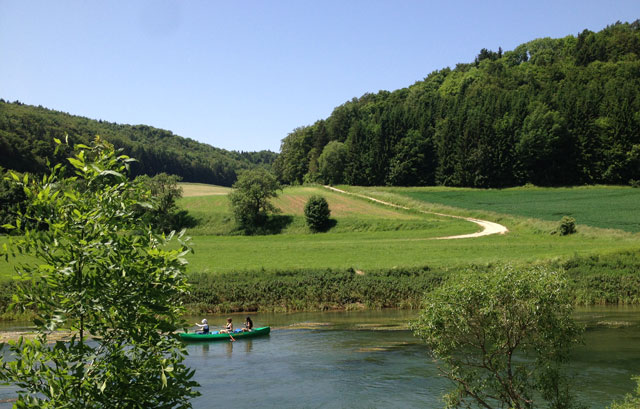 Kids canoeing on the Danube

Fortunately, the path then leads into a forest otherwise we might melt altogether. Suddenly it starts descending  and I can’t even enjoy it because I keep thinking about having to ride back up again on the way back. At the bottom, when I catch up with Jean Michel (I’m always reluctant to go down too fast in case I skid or something), I tell him that I really don’t think I’m up to the return journey. 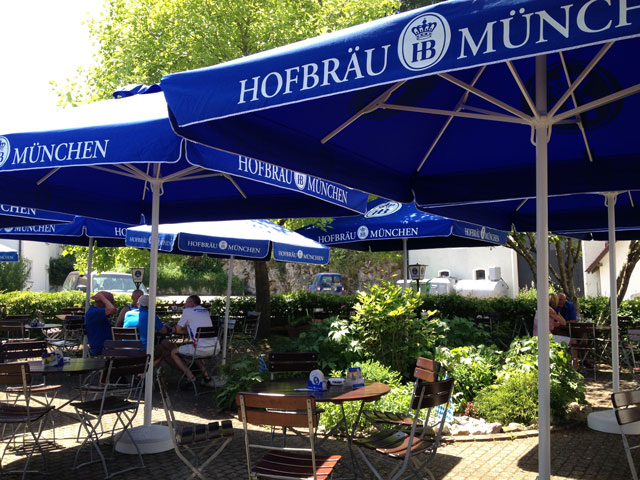 Lunch in the shade at Gasthaus Mühle in Dietfurt

“I have a proposal”, he says. “We can take the train back from Beuron.” I shout with glee. After lunch at Gasthaus Mühle in Dietfurt, where we cool off under the shade for an hour and eat enormous salads, we’ve only done 15 kilometers out of 38 but Jean Michel reassures me that there are no more hills. 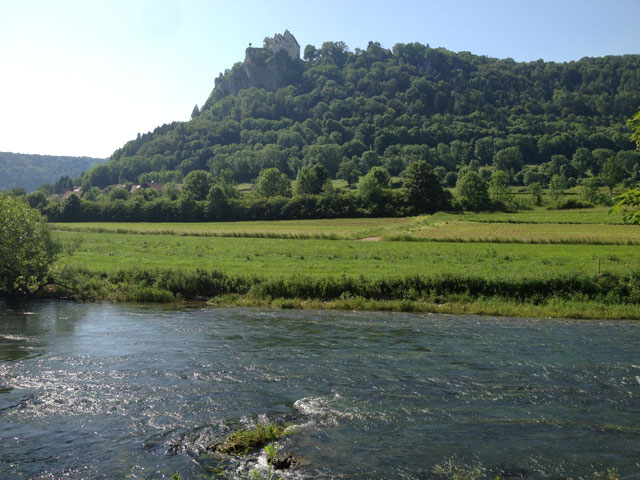 Werenwag Schloss that I don’t want to cycle to

Well, he’s wrong. Most of the path from Dietfurt to Beuron is up hill and down dale in the boiling sun, with a few shady stretches to save the day. We round a corner at one stage and Jean Michel points out a shloss on a high hill towering above us. “That is one schloss I do not want to see”, I say. “Then I’ll take it off the list.” “Don’t let me stop you see it; I’m happy to stay down here and rest while you go up.” He very kindly says he’ll relinquish it for my sake. 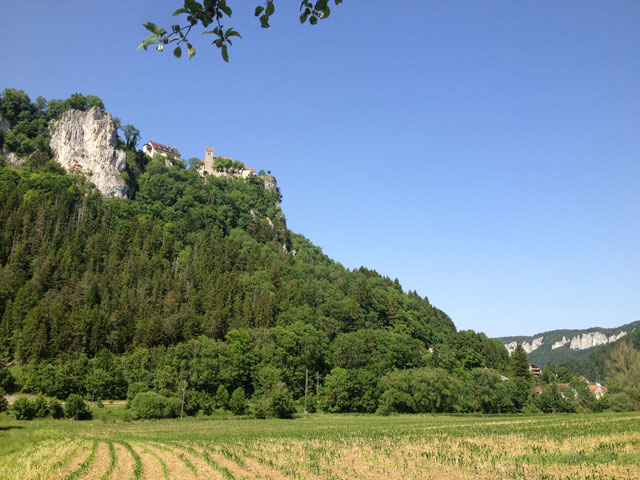 Eventually we find somewhere to have coffee – Gasthof Neumühle in Tiergarten – and I suddenly remember the word eis so we have an ice-cream Sunday each. After all those hills – and the ones to come – I reckon  we deserve it. The enterprising chef, Walter, looks up the train timetable for us and behind him, I see a plasticised Radweg brochure with all the Danube cycling maps we need. Bingo ! 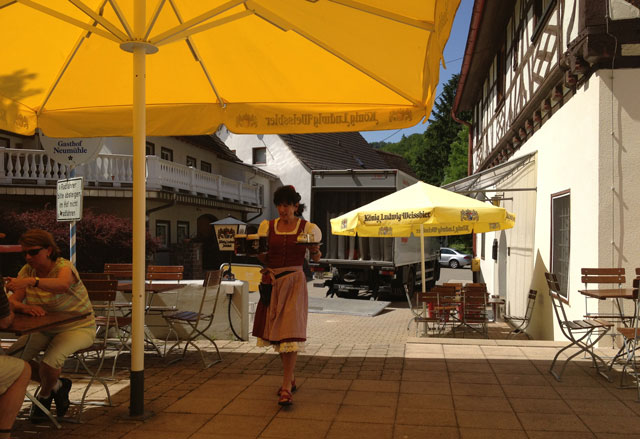 The ice-cream seems to give me new strength and I somehow get ahead during the next stretch. Jean Michel’s probably taking photos. I round a corner after another climb and see a large building on the right. It turns out to be Sant Maurus Kapelle and has painted scenes both inside and out. We buy a booklet but it’s all in German. I think it was built in 1861. 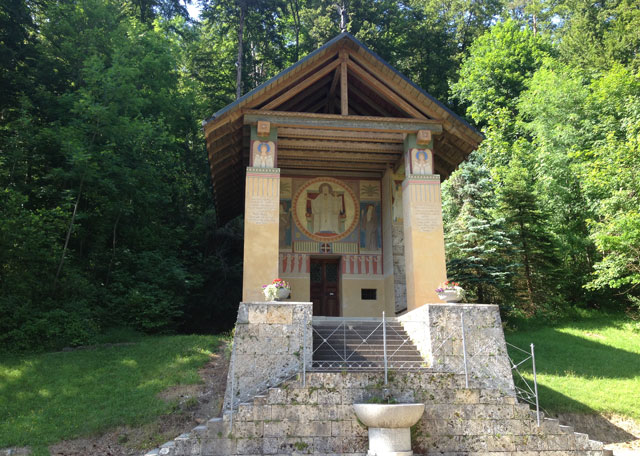 At that point we see a signpost saying 6 K to Beuron. I thought it was only 3 which is a bit disappointing. I’m getting tired by this stage. We see the 5 o’clock train speed past so know we’ve got plenty of time to catch the 6.09. 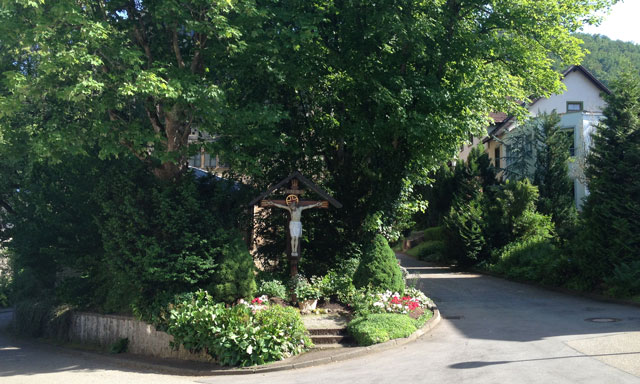 After a glass of riesling  to cool off (a little early maybe but they don’t have any diet coke) at a local café opposite a crucifixion, we cycle down to the station which shows no sign of selling tickets. However, a lady indicates a little haus further along the platform which turns out to be a ticket machine – all in German, of course. However, after four tries we manage to buy one ticket and then another second. 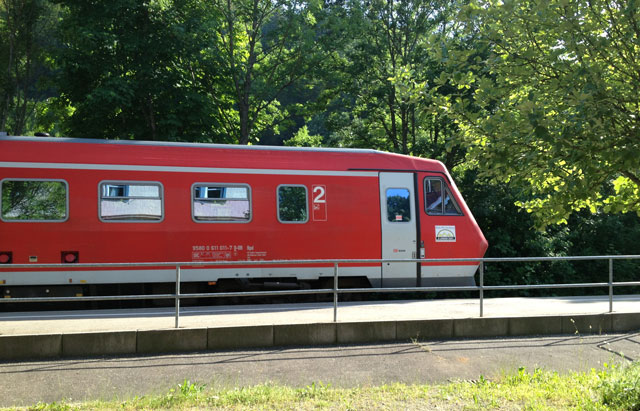 The train arrives and we see there is a bike compartment. Yes, inside there is a large area to put our bikes and even seat belts to attach them. But there is no special system for hoisting the bikes up the steep steeps into the train. Fortunately, another passenger helps me. 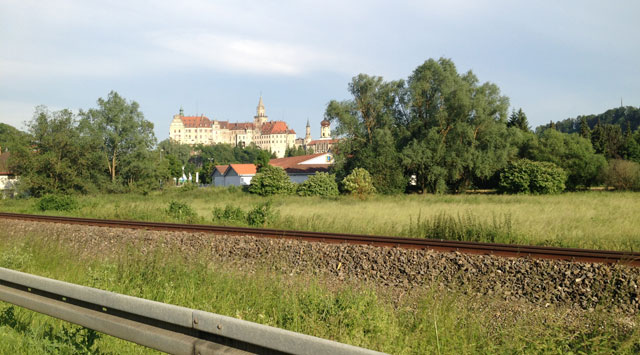 Sigmaringen schloss from the train

It’s rather fun going past the places we cycled along, taking 20 minutes instead of 3 hours! Jean Michel amazingly knows how to get from the bahnhof to the car. He always surprises me with his sense of direction. Looks as thought it’s going to be hot and fine tomorrow again. But it’s going to be hard to beat today!

This entry was posted in Cycling, Germany, Restaurants and tagged cycling along the Danube, Sigmaringen. Bookmark the permalink.