﻿ Cycling in Germany #13: Wörlitz Gardens and the beginning of German Neo-classicism

After a standard breakfast, we set out on our bikes at about 10 am for Wörlitz, 25 k away. I’m feeling rather sluggish and the somewhat dull countryside doesn’t help. We’re finding it a little hard to adapt to the difference between the Elbe and the Danube where nearly every bend brings a change of scenary. We like the red brick buildings with their intricate details though. 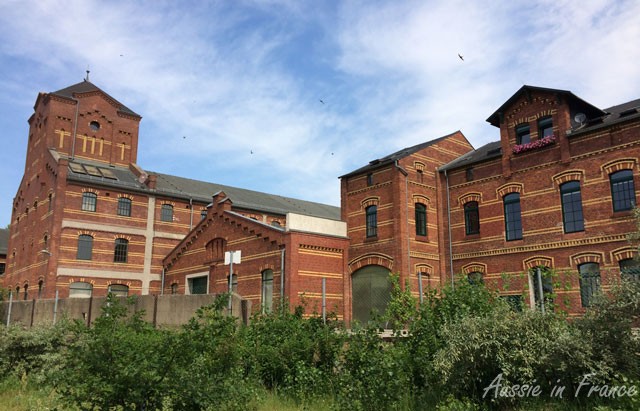 We eventually come to a pretty little village with a watermill and an excellent cappuccino at the top of a steep climb restores my energy. 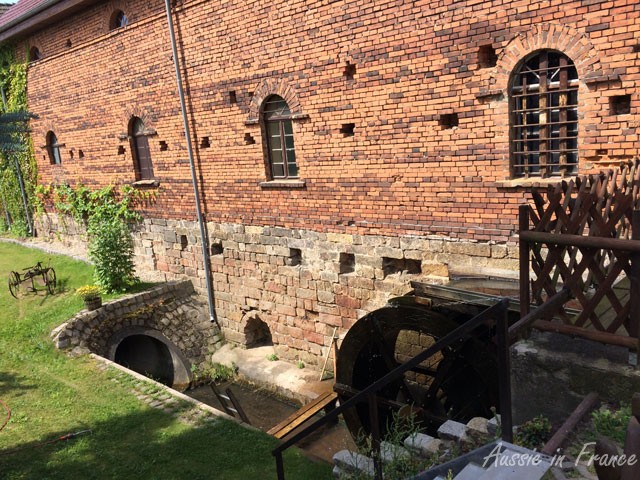 Griebo waterwheel built in about 1845

We arrive at Coswig and take the cable ferry. Jean Michel explains how the current and the length of cable are used to cross the river. 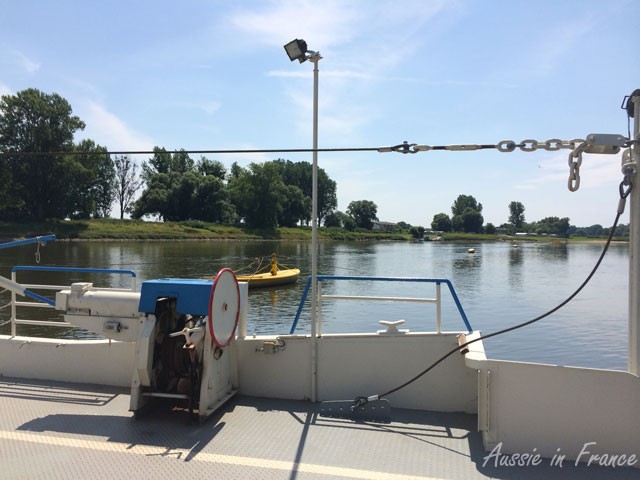 Cable and winch system on the car ferry

Worlitz is another 5 km along the river. By then it’s lunchtime so we follow the advice of Le Routard and eat at Grüner Baum. Jean Michel chooses fish and I go for the schweiner schnitzel which is excellent. 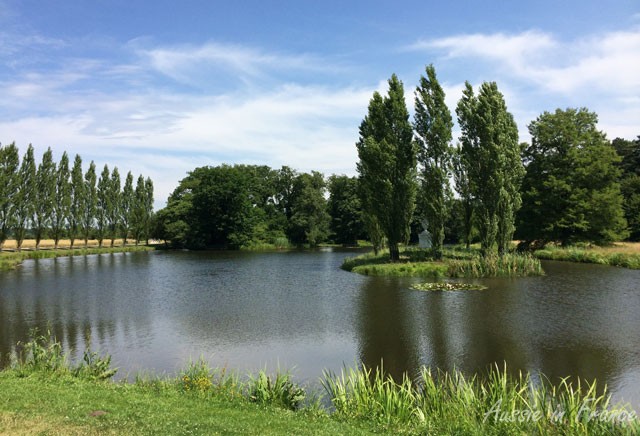 We leave our bikes in a courtyard next to the tourist office which is locked at night and set off for the castle on foot. We are delighted at what we see. The 277-acre Wörlitz Garden was mainly developed between 1764 and 1800 and is one of the largest and earliest landscape parks in Europe. It was masterminded by Prince Leopold III Friedrich Franz of Anhalt-Dessau and his architect friend Friedrich Wilhelm von Ermannsdorf. 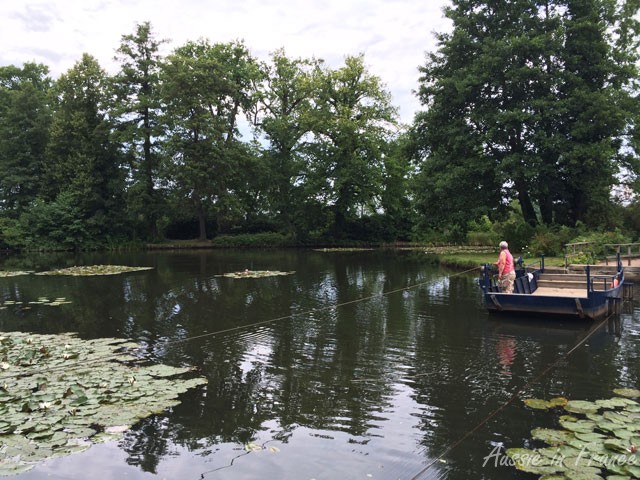 The two of them went on a grand tour of Europe which included England, France, Italy, Switzerland and Holland over a period of sixteen years and put their innovative ideas and ideals into practice in a series of buildings and naturalistic landscapes containing several lakes, around which there is no enclosure whatsoever. Small cable ferries take you across the water in the middle of waterlilies or you can take a so-called gondola like the German group below. A gondola with a table in the middle for drinks!

We choose to visit the palace (landhaus), the Gothic House and Hamilton Villa, all of which have guided tours in German with, we are told, documentation in French and English.

We love the gardens, which are very peaceful and bucolic and we love taking the little ferries. 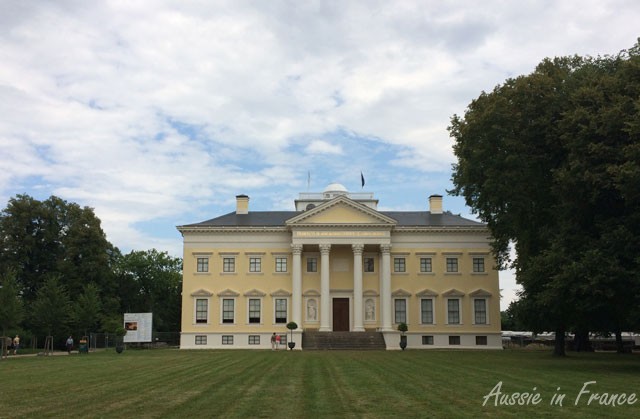 The landhaus, the first Neoclassical building in Germany

It turns out we are the only people on the tour of the landhaus and the guide only speaks German. She gives us documentation in French and tries her very hardest to share her enthusiasm about the house by articulating clearly and repeating the words we seem to recognise. At the end of the ¾ hour visit, I’m exhausted! 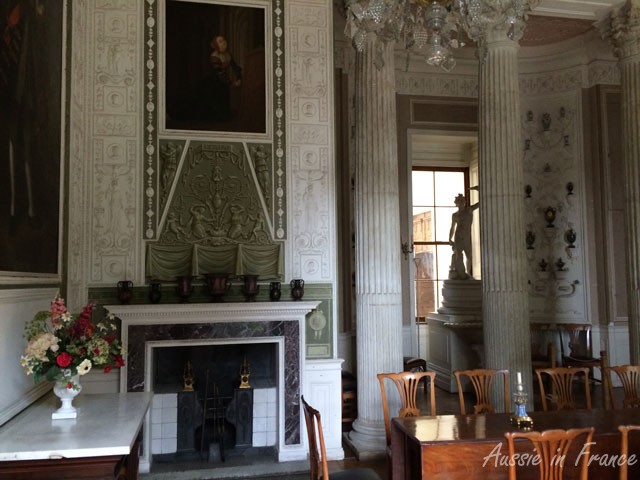 A most unusual fireplace inside the landhaus 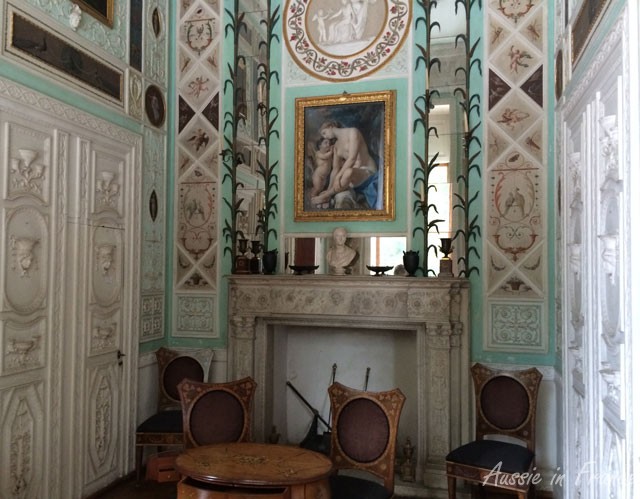 Another room in the landhaus 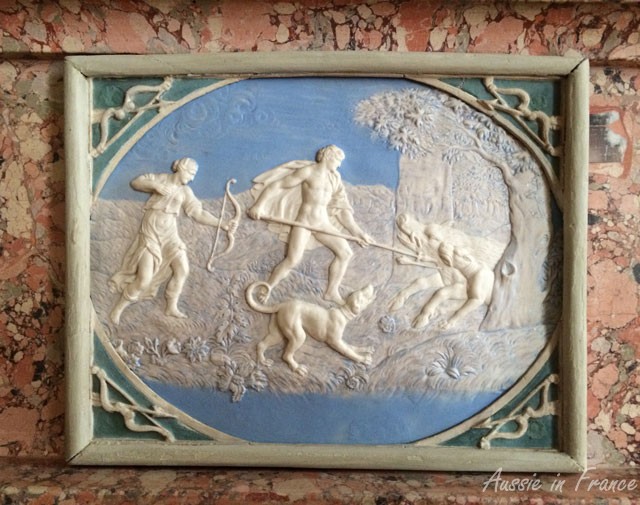 The landhaus, finished in 1773, was the first Neoclassical building in Germany. It contains a large collection of Wedgwood porcelain and many innovative features such as pull-out beds. 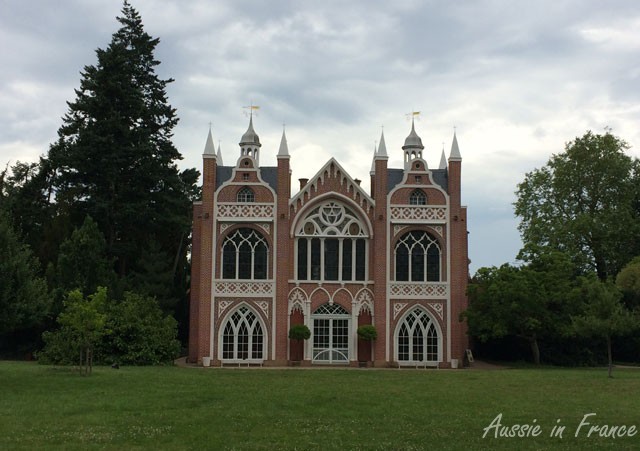 The Gothic House, one of the first Neogothic structures on the European continent

Since it’s already 4 pm we only visit the Gothic House from the outside. Started by Erdmannsdorff in 1774 and modelled on Horace Walpole’s villa on Strawberry Hill, it was one of the first Neogothic structures on the continent. Cornflowers in a field of wheat, rye and barley

We start walking towards Hamilton Villa and the path takes us around a never-ending field of rye, wheat and barley.  An hour later we arrive at the Villa which is overrun by a wedding party we saw when we first arrived. We are told by a helpful man in English that there is another compulsory guided tour in German so decide not to enter after all. However, as we walk away, the man comes after us and gives us a brief rundown on the what there is to see and says we can explore on our own. 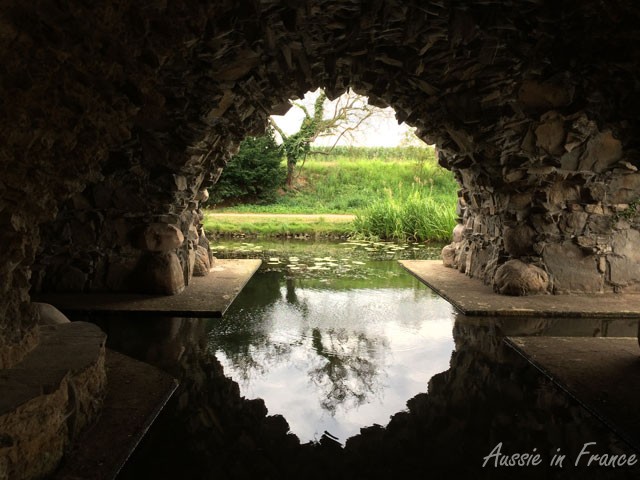 Looking out from under Vesuvius

When Leopold III was off on his grand tour of Europe in 1760, he was capitivated by Mount Vesuvius and the newly discovered of Pompei so 22 years later he built his own little volcano on an island of local rock. A hollow cone at the top contained a chamber with three fireplaces and a roof with an artificial crater that could be filled with water. 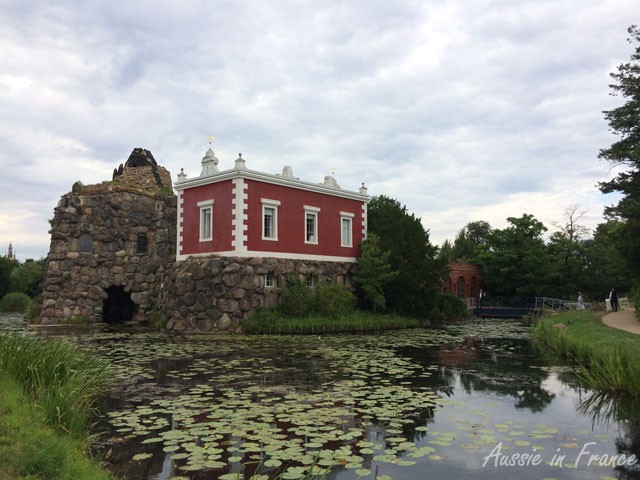 Villa Hamilton next to Vesuvius

He then built a lake around the volcano and invited his friends over to watch the eruption. Ah, the advantages of being a rich prince! There is also an amphitheatre, Roman baths and various chambers underneath the volcano. 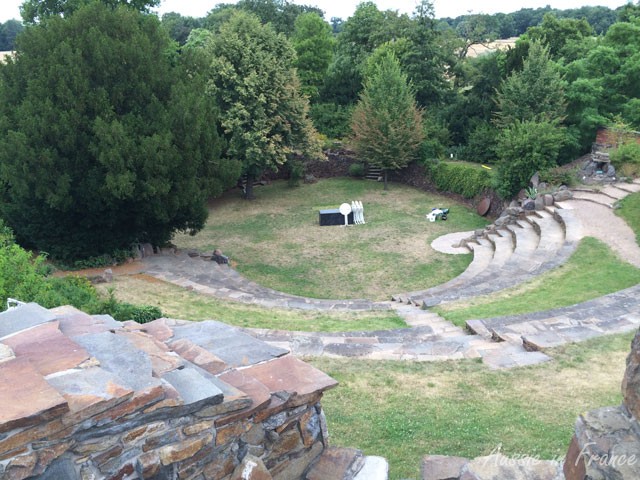 The Roman amphitheatre where the Prince held concerts

The little Neo-classical villa at the foot of the volcano symbolises the friendship between the prince and the British diplomat, Sir William Hamilton, who was also a geologist and collector of antiquities. It, too, was designed by Erdmannsdorff. We pay an extra 3 euro to take photos which I think is a little exaggerated given that the entrance is 4 euro per person. 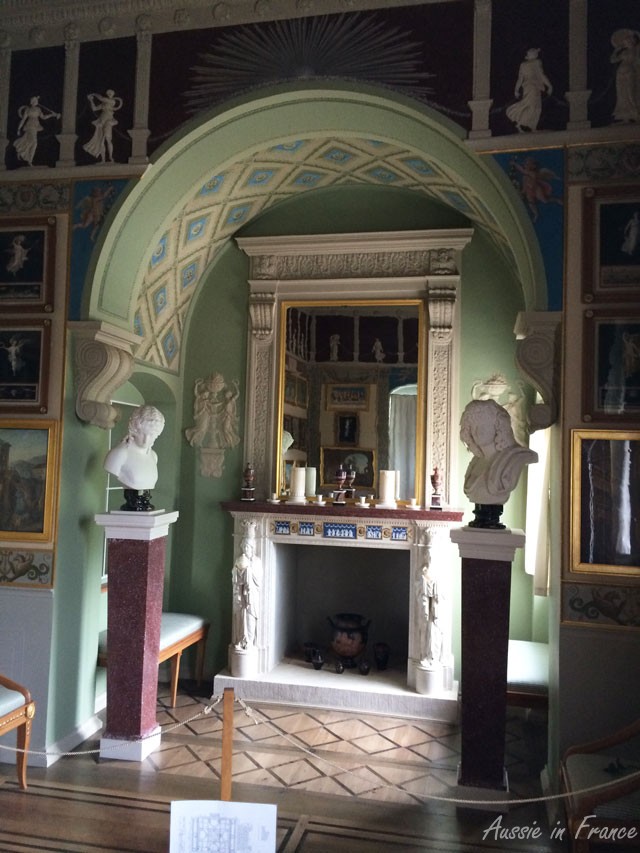 The fireplace inside Villa Hamilton

We walk back along the artificial lake to the tourist office, suddenly worried that it might close before we get there. What will happen if our bikes are locked up for the night ? Fortunately, we make it with ten minutes to spare.  It’s 6 pm and we’ve still got a 2 hour ride home! It’s been a long day …

39 Responses to ﻿ Cycling in Germany #13: Wörlitz Gardens and the beginning of German Neo-classicism